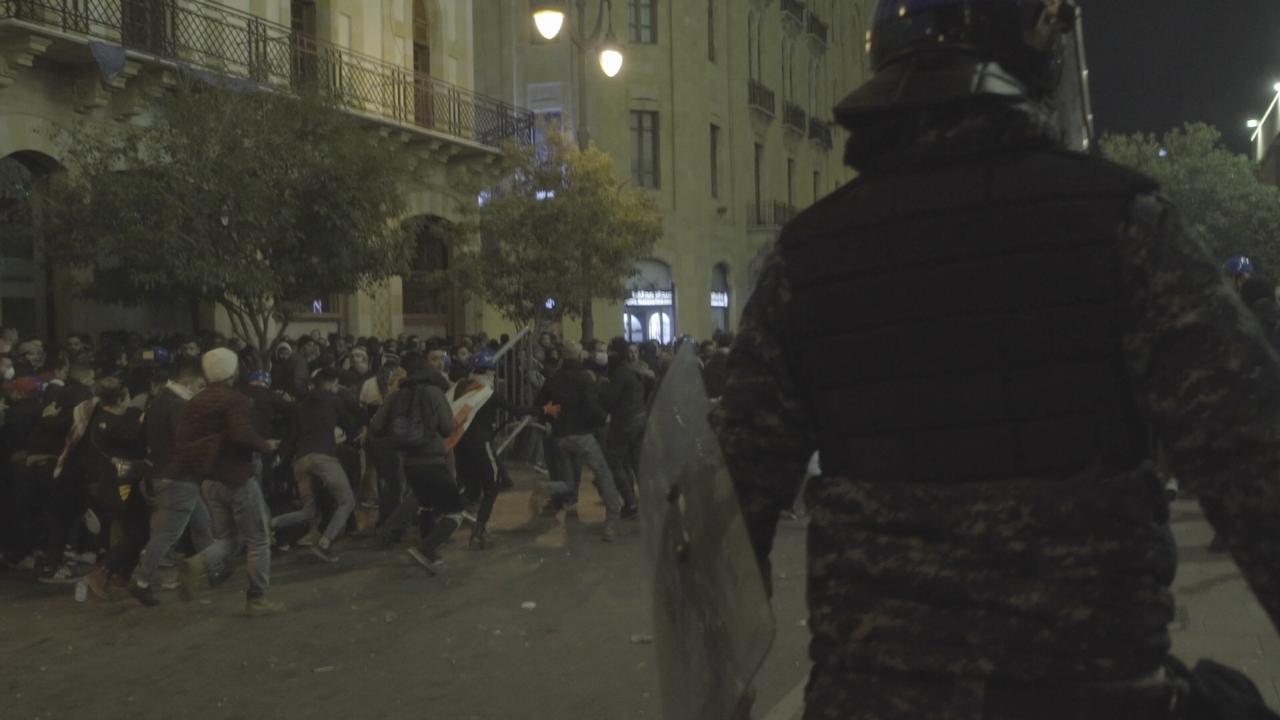 Sunday’s protests came hours before Aoun was due to meet with representatives of parliamentary blocs to select a new prime minister. Thousands rallied in Beirut to protest against former prime minister Saad Hariri’s possible nomination and to denounce the violent crackdown on protesters Saturday night.

For two consecutive days, riot police used tear gas, fired rubber bullets, beat and arrested protesters in an attempt to disperse the crowds that had rallied outside Parliament. Clouds of tear gas hovered over downtown Beirut streets, as ambulances swerved between blockades set up by demonstrators to pick up the wounded.

The incidents were among the most violent crackdowns on protesters since nationwide anti-government demonstrations began two months ago, resulting in the October resignation of prime minister Saad Hariri.

On Sunday, dozens of protesters in Riad al-Solh chanted “Saad, Saad, don’t dream of it anymore” –a clear message that Hariri’s return would not be accepted by the demonstrators.

Monday morning, the presidential office issued a statement on Twitter saying that, “President Aoun responded to prime minister Saad Hariri’s wish to postpone parliamentary consultations until Thursday December 19, for further consultations on the issue of forming a government.”

Civil society activist and political analyst Chadi Nachabe attributed the delay to political insecurity of anyone who takes the reins of government.

“The postponement regarding [the selection of] the new prime minister is happening because Hariri doesn’t want to form a Cabinet, especially without the backing of foreign and regional countries,” Nachabe, told Beirut Today. “Hariri knows of the risks that come with the next government and doesn’t want to risk the economic and government collapse, because that will mean he is out of the political game.”

For nearly two months, demonstrators nationwide have taken to the streets to demand a new government and, pointedly, to create a new Lebanon in which sectarian interests among Sunni, Christian, Druze and Shiite parties take second place to efficient and non-corrupt governance.

See also: Thousands of anti-government protesters take to the streets in Lebanon

The early days of the protests were marked by a mixture of raw emotion, humor, and entertainment. In Martyr’s Square, the epicenter of mass protests was the scene of belly dancing, concerts, and even weddings.

Now, demonstrators are sending out internet warnings of Hezbollah and Amal supporters’ movements. In recent weeks, an Instagram page called Daleel Thawra, meaning Revolutionary Guide, has been posting alerts and advising protesters to back down and avoid violent confrontations. Launched early in the uprising, the guide includes contacts for support hotlines, legal counseling and a variety of strategy meetings, and most recently, a list of precautions against tear gas.

Violent incidents at the hands of followers and allies of Hezbollah and Amal have raised concern that more conflicts may be coming.

“Hezbollah and Amal Movement want to create problems and decrease the power of the revolution through violence and clashes,” said, Nachabe. “They are also sending supporters to infiltrate the revolution and instigate violence between demonstrators and security forces,” he added.

Nachabe also said Hezbollah leader Hassan Nasrallah can use the violence as leverage on Hariri and other any other nominations, “[Nasrallah] can say: look, the revolution is becoming weak, we can talk government now.”

Roula Chouraiki, an activist and volunteer with Beirut Madinati, an independent and volunteer-led political campaign challenging the political establishment, echoed Nachabe’s take on the use of violence against demonstrators. “What is happening lately with the violence is a way of maintaining leverage.”

Hezbollah’s rhetoric and emerging violence have put anti-government protesters on edge. Some tactical changes are a direct result. According to Nachabe, there are two options and strategies protesters can adopt in the future.

“The first, demonstrators continue to meet on the ground, and if something happens between Hezbollah supporters and the protesters that will lead them to stop protesting in downtown Beirut, there are always other areas that can be used as a decentralized base of the revolution,” he said.