Beirut Today
Home Politics Analysis Why do our streets flood? Because Lebanese politicians benefit from our broken... 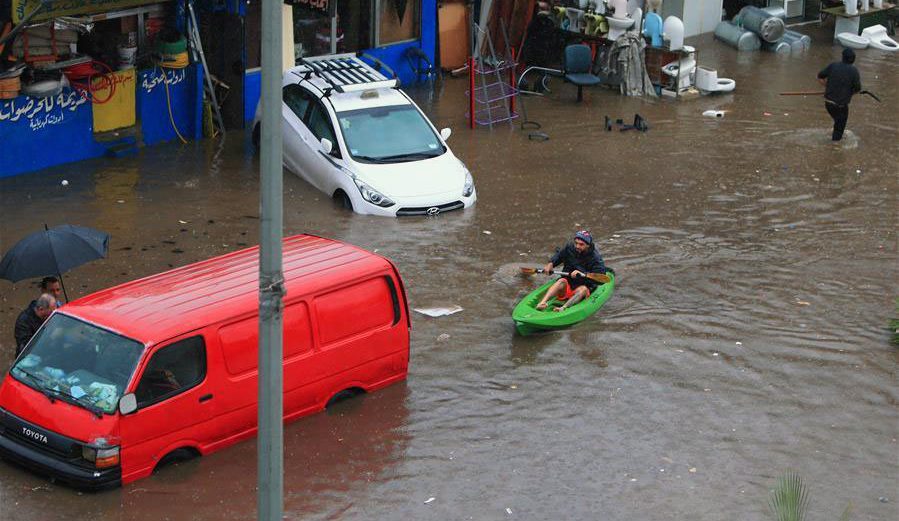 Heavy rain seems to paralyze the country every time it hits. This weekend, streets turned into rivers that civilians could paddle across with inflatable boats. Water damaged cars, flipping them over and causing them to float away, and flooded homes. A photograph of an ATM machine in the country gushing out water also went viral.

The outgoing Minister of Public Works and Transportation, Youssef Fenianos, blamed the flooded streets on our “50-year-old infrastructure” and pinpointed the recent economic crisis as a factor that makes it difficult to work on facilities at the moment.

On the books and in the past few years, Lebanon has spent billions of dollars on infrastructure initiatives. In 2018 alone, the Council for Development and Reconstruction (CDR) was implementing  $1.3 billion worth of projects related to electricity, telecom, solid waste, wastewater, and potable water.

While the minister’s words ring true, the real question remains: If we have 50-year-old infrastructure and have spent billions of dollars on it, why haven’t successive governments found ways to improve it?

Services in the Civil War

Rather than being an essential right for citizens, public infrastructure is viewed as a weapon that can help sectarian parties gain more voters and followers. This is particularly true during elections, when politicians pave the roads –quite literally– for exclusion and unequal access to services through a system of nepotism and clientelistic networks.

During the Civil War, political militias in Lebanon unlawfully used essential services to assert their sectarian dominance and strength on the ground. Water and electricity, among other things that citizens of other countries might take for granted, became powerful tools used for pressuring political rivals. For example, the Lebanese Forces would threaten and sometimes cut off Beirut’s water supply, which came from the mountains they dominated.

Needless to say, Lebanon’s infrastructure took a major hit because of the war and the criminal activities of the militias. Most roads were damaged and 71 villages were completely destroyed –and this is besides the fact that over 140,000 citizens would lose their lives to the war.

The country has not structurally recovered since then, but is that so hard to believe when the same people who led those militias continue to rule it? Warlords simultaneously became politicians and businessmen (and not businesswomen, for lack of women leading in such a patriarchal society) with the authority to capitalize on everything around us by blurring the lines between public and private institutions.

Today, public infrastructure continues to be a site for political struggle and economic gain.

The amount of money invested over the years tells a story: The problem isn’t a lack of resources. We have millions of dollars in foreign grants for bettering our infrastructure, and we have the experts, designers, and builders necessary to create and implement decent projects.

The real problem is how these resources are managed, which leaves Lebanese infrastructure is a victim of weak governance, Scroogelike (tis the season, after all) politicians, and private sector interests. All three categories are viciously intertwined.

You can see it in how politicians have been handling the Bisri Dam project, or any dam project for that matter. They seem to be insistent on building wasteful dams, using “water scarcity” to justify the need for them.

Their decision becomes recognizable as being badly-judged when we recognize that the government has not monitored water from precipitation, springs, groundwater basins, and wells since the late 1960s. Statistics also show that around 70 percent of Beirut’s water is provided from the Jeita Spring, but that 40 percent of it goes to waste before even reaching the capital because of leakage, poor maintenance, and a rotten waterpipe network

Regardless of any facts that you might present to these politicians, they don’t want to fix the system.

They want short-term solutions that are developed through massive projects with massive costs. Expensive projects mean there’s more room to illegitimately siphon more money into their pockets. When a dam costs $1.2 billion to build and operate, it’s easier to blame a missing $100 million on technical failures and design changes.

Lebanese infrastructure is built on the wants of the ruling class, rather than the needs of the people. Our system is rigged to make sure that those who live in poverty, one third of the population to be more precise, continue to live in poverty and without access to their most basic human rights.

Before a framework of accountability is developed and implemented –and, dare I say it in these revolutionary times, our warlords are prosecuted– the streets of Lebanon will continue to turn into rivers every time it heavily rains.

We have at least nine governmental institutions that have a stake in the water sector, and many of their roles overlap when it comes to developing projects. So who do we hold accountable when things go wrong? And how do we even know there’s something wrong if we don’t have access to any of the data from these projects?