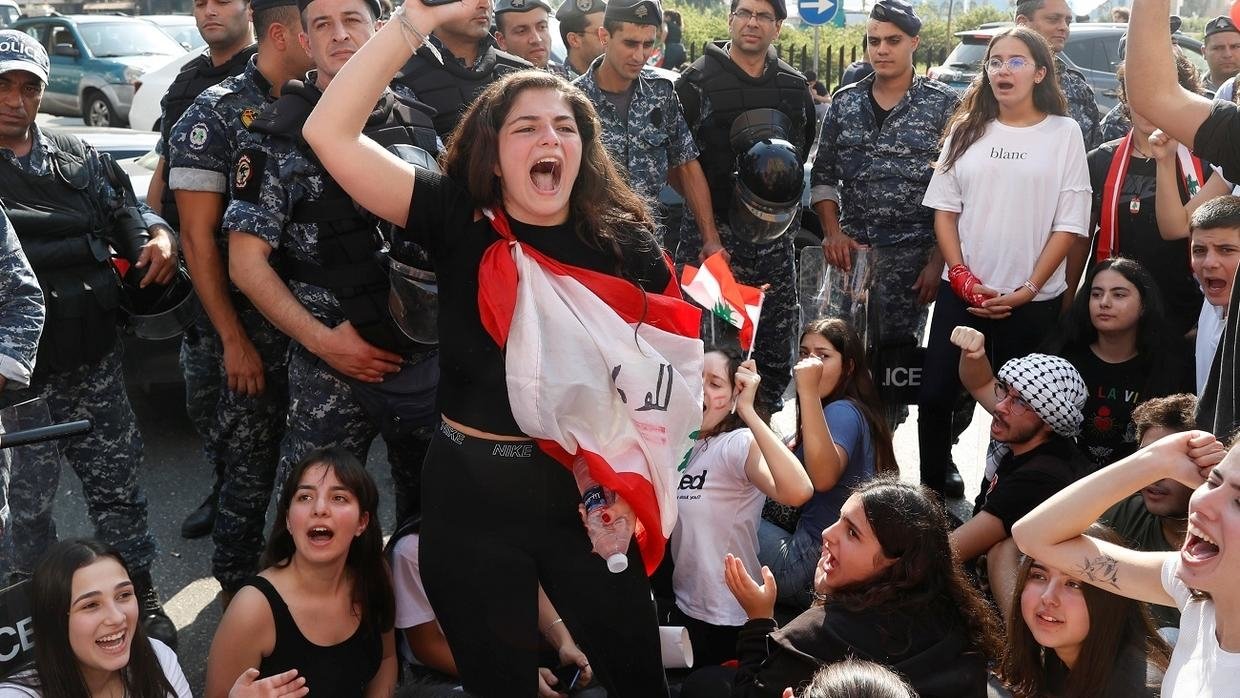 Students have spoken: The economy is not working for the youth

After three weeks of massive protests, student movements across the country became the driving force behind the ongoing revolution. Students rejected a return to normalcy as classes were set to resume this week and took to the streets to demand a better future.

In a country where youth unemployment and emigration are emblematic issues, these protests do not come as a surprise. Students grievances focused primarily on their relationship with a state that continuously placed them on the margins of society.

Besides their inability to vote before the age of 21, students’ political role is largely constrained. Student elections are banned in most Lebanese universities, as well as their ability to organize.

Students’ economic role is also commodified. Their labor, in the best-case scenario upon their graduation, is destined to be “exported” as a way to bring back inflows of remittances to finance the Lebanese economic model. If they cannot emigrate, most fresh graduates are either confined to low-paying jobs, often outside their field of study, or doomed to endlessly search for any form of employment to sustain themselves.

On top of that, the state intentionally burdened the students with the country’s recent economic woes. Austerity measures targeted the already underfunded Lebanese University, and the Ministry of Education remained surprisingly silent as private universities recently priced their tuitions in US dollars amid fears of a currency depreciation.

These protests came as a way for students to reclaim their long-lost political role in Lebanese society, and demand the overhaul of an economic system that didn’t provide them with any opportunities to succeed. From an overpriced educational system to an economy that doesn’t provide jobs for fresh graduates, the issues that brought the students to the street prove that this system is not working for our youth.

Thus, an increased demand for private education put an upward pressure on its price, as its cost rose by 83.08 percent since 2008. With the absence of a clear regulatory framework, private universities didn’t shy away from increasing the cost of education, amid an environment which made it hard for students to organize politically as to oppose these hikes.

Political parties in power also took advantage of an overpriced educational system, and their cooptation of the state. Licenses were distributed to establish universities with clear ties to the political status quo, amid little to no regulation to assess the quality of the education they offered. These universities became an extension to politicians clientelist networks, and a way to retain a political base of support.

After almost 30 years of underfunding and negligence, university education became no more than an overpriced commodity serving the interests of politicians and “elite” universities. Funding the Lebanese University, imposing a student contract that limits tuition increases and eventually abolishing the sectarian system are the only ways university education can serve the interests of its students.

An economic model that forces the Lebanese youth to migrate

Students in Lebanon face little employment opportunities upon graduation. Youth unemployment estimates range from 21 percent to as high as 37 percent, indicative of a rather large lack of job creation.

The basis upon which the Lebanese economic model in the post-war period was built puts great constraints on businesses creating high paying jobs, and favors activities yielding passive income, with little to no job creation.

As Central Bank’s monetary policy is geared towards attracting capital inflows and keeping the peg of the Lebanese Pound to the US Dollar, high interest rates were set, thus massively curbing investment. Capital owners favored putting their money in bank deposits yielding high interest rates instead of running the effort of opening risky businesses.

Fiscal policy also favored low effort economic activities like real estate speculation for example, which was left untaxed prior to 2017. The state also burdened by corruption and a hefty debt since the early 1990s was left with little room for capital expenditure to improve a deteriorating infrastructure, thus increasing constraints on businesses.

Instead of creating jobs for fresh graduates, state negligence commodified the Lebanese youth labor into one of the country’s only “export” commodities in order to finance an inefficient economy. Transfers made by Lebanese nationals living abroad are considered the country’s main source of capital inflows, bringing in foreign currencies crucial to keeping the peg, and funding the state’s debt through the banks.

Tax policy was also set in way to appropriate expats remittances through indirect taxation and exorbitant fees as their prevalence tends to increase consumption. Indirect tax and non-tax revenues made up almost 69 percent of all state’s revenues between 1998 and 2017, showing their significance for government finance.

The importance of remittances inflows to the Lebanese economy leaves our current politicians with little incentive to deter migration, producing a vicious cycle where the Lebanese youth is the main victim. Breaking this cycle –and encouraging job creation– would require removing the burdens of the failed economic policies on businesses and deterring economic activities that generate passive income.