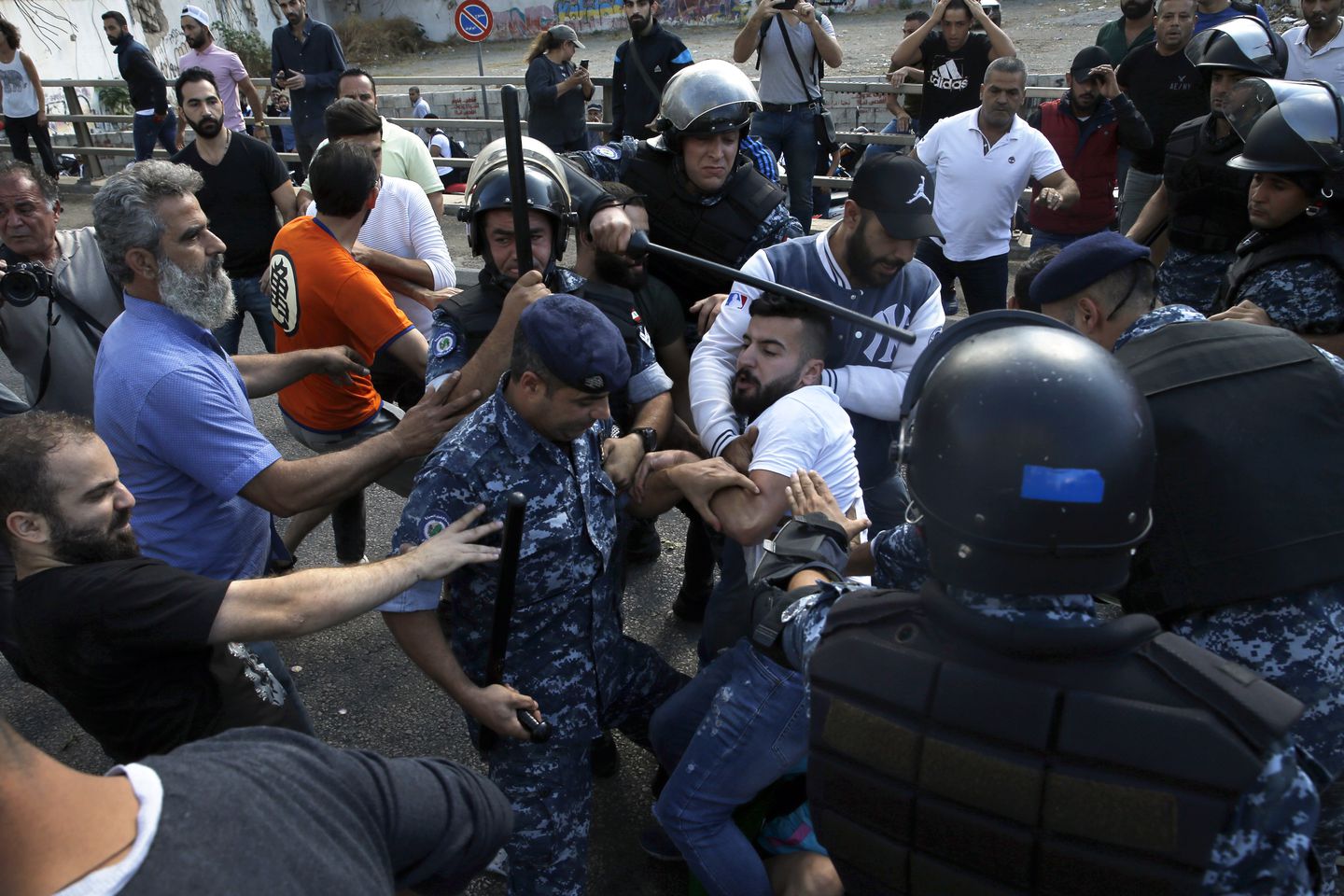 “We don’t accept the fall of the mandate, nor do we support the resignation of the Cabinet and early parliamentary elections in these circumstances,” said Hezbollah Secretary General Hassan Nasrallah in a televised speech on Friday, October 25.

One hour prior to the speech, Hezbollah supporters and affiliates stormed Martyrs’ Square to silence negative personal remarks on Nasrallah and crackdown on those chanting against Hezbollah’s complicity in the current cabinet makeup.

The party has received increasing criticism within its own constituency for not aligning with the general protest demand to overthrow the government and institute new democratic elections outside the sectarian quota.

Besides that, anger within areas generally containing Hezbollah’s social and political pool of support has arisen as a result of physical and verbal attacks against demonstrators. The Nabatieh and Tyre regions of South Lebanon have been particular sites of violence by partisan members of the Amal Movement and Hezbollah.

In light of rising popular anger, and the “counter-revolutionary” status recently perceived of Hezbollah, it’s crucial to thoroughly understand the context in which local dissatisfaction transformed into vocal opposition. This comes alongside comprehending the measures employed by the party to survive the crisis (read: uprising) at hand.

On October 31, 2016, leader of the Free Patriotic Movement and Hezbollah ally Michel Aoun was elected by a self-extended parliament as President of the Lebanese Republic. The formula also included Saad Hariri as Prime Minister and continuing the long-lasting tenure of Nabih Berri as Speaker of Parliament.

Later named the “Strong Mandate” by Aoun and Hezbollah supporters, the state formula was branded as a solution to Lebanon’s persisting economic, social and political issues.

Nevertheless, with an exasperating financial crisis due to prevalent monetary and fiscal policies which have persisted in Lebanon since the early 1990s, the current economic crisis hasn’t served the ruling elite well.

In addition, the parallel rise of Gebran Bassil while assuming the leadership of the Free Patriotic Movement and suppressive state measures against activists and journalists have created an on-going debate within Hezbollah and its supporting constituency with regards to the legitimacy of the “Strong Mandate”.

Currently in a rough spot, Nasrallah felt the need to defend a system brought about with the patronage of Hezbollah as Lebanon’s strongest political and military force. Tied by regional and national interests regarding his alliance with Aoun and Amal Movement leader Nabih Berri, an increasing loss of credibility among allies has surfaced after yesterday’s speech.

An attempt to survive: Between delegitimization and co-optation

In the power struggle to survive the popular uprising currently sweeping across all regions in Lebanon, the sectarian political parties utilized different strategies based on the nature of their traditional electoral support base.

With Hezbollah, survival is divided into two parts: delegitimizing the protest on one hand, and co-opting it on another. Oddly enough, these often contradictory tools are utilized by different structures within the party.

Manifested by Nasrallah’s speech, the high-ranking officials of the party have openly promoted a protectionist strategy vis-à-vis the entire system, ranging from the Cabinet to the Central Bank to all stakeholders in the process of transition. This is exemplified by Nasrallah’s full-fledged support for the list of reforms presented by Hariri, which revolved around certain cuts to public spending and minor redistribution.

Nasrallah proceeded to give the protesters ‘advice’ on how to ‘negotiate’ with the government, albeit in the context in which widespread suppression tactics were used by various parties on one hand and the state’s security forces on another.

Frustrated by the political gain which may be achieved by the Lebanese Forces and the Progressive Socialist Party if the government resigns, Nasrallah pointed fingers and suggested the existence of a conspiratorial plot by the United States and Israel to destabilize the country.

Many activists on the ground have pointed out the immense parallels between Nasrallah’s rhetoric now and his rhetoric in 2011 during the Syrian uprising: acknowledging the existence of socio-economic demands and grievances, but highlighting an overwhelmingly-dominant political agenda which serves against the party’s internal and external interests.

On the other hand, a more local analysis of Hezbollah’s lower-rank membership and cadre, alongside parts of its stubbornly supporting constituency, demonstrates a co-optation of the protests rather than their delegitimization.

On that basis, pro-Hezbollah activists reframed the protest by suggesting a ‘central compass’ to how corruption, fraud and oppression in the country ought to be observed: from the lens of critiquing the Central Bank.

Before expatiating on this point, it is worth noting that criticism of the neoliberal policies of the Central Bank has been prevalent among diverse groups of leftists, developmentalists and many who believe such policies have promoted inequality and unproductive forms of rent-seeking investment.

Despite gaining the approval of Hezbollah’s ministers for a renewal of his term as Governor of the Central Bank, Riad Salameh was the target of corruption for Hezbollah activists. Talks of his various financial engineering arrangements which profited major banks and role in facilitating the national debt surfaced throughout the demonstrations facing the Central Bank offices.

This process of co-optation was initiated with the intention to absolve the party of responsibility, or at least to diminish it. In an interview with the New York Times published on October 25, Riad Salameh championed his own role in combating terrorist financing, in reference to his application of US sanctions on the Shi’a militant group.

Utilizing the automatic animosity Salameh’s official role as Central Bank head provides towards groups on the list of US-designated terrorist groups, Hezbollah created a perceived friction between itself and one of the pillars for sustained corruption on the monetary level. This was enough to mobilize the party to align itself with the cause for social justice on an anti-Salameh note.

“Down with the rule of banks!”; appropriating a popular slogan utilized by leftists in different protests for the past few years, Hezbollah deflected and/or downplayed attention from corruption prevalent in the public sector and policies enacted by allied ministries.

From the margin of power to the head of state

Despite being the country’s most powerful armed group since the end of the civil war, one ought to calculate for the change in Hezbollah’s positioning vis-à-vis the state and its relevant power structures.

At a point in time in 1993, Lebanese Internal Security Forces and Armed Forces killed 13 Hezbollah supporters in a protest against the Oslo Accords. For more than a decade after the civil war, Hezbollah didn’t have ministers in the cabinet and was largely protected by the presence of Syrian occupying forces.

After 2006, the party portrayed itself as the vanguard against the corruption prevalent within the government headed by former March 14 Prime Minister Fouad Siniora. At this stage, the party is in the direct defense of the country’s major pillars of power, and is leading a negotiating strategy with the protesters.

The reason behind the average citizen’s immense eagerness to hear Nasrallah speak is directly related to their concrete awareness of Hezbollah’s hold on whatever decisions are to be taken by a cabinet largely influenced by it.