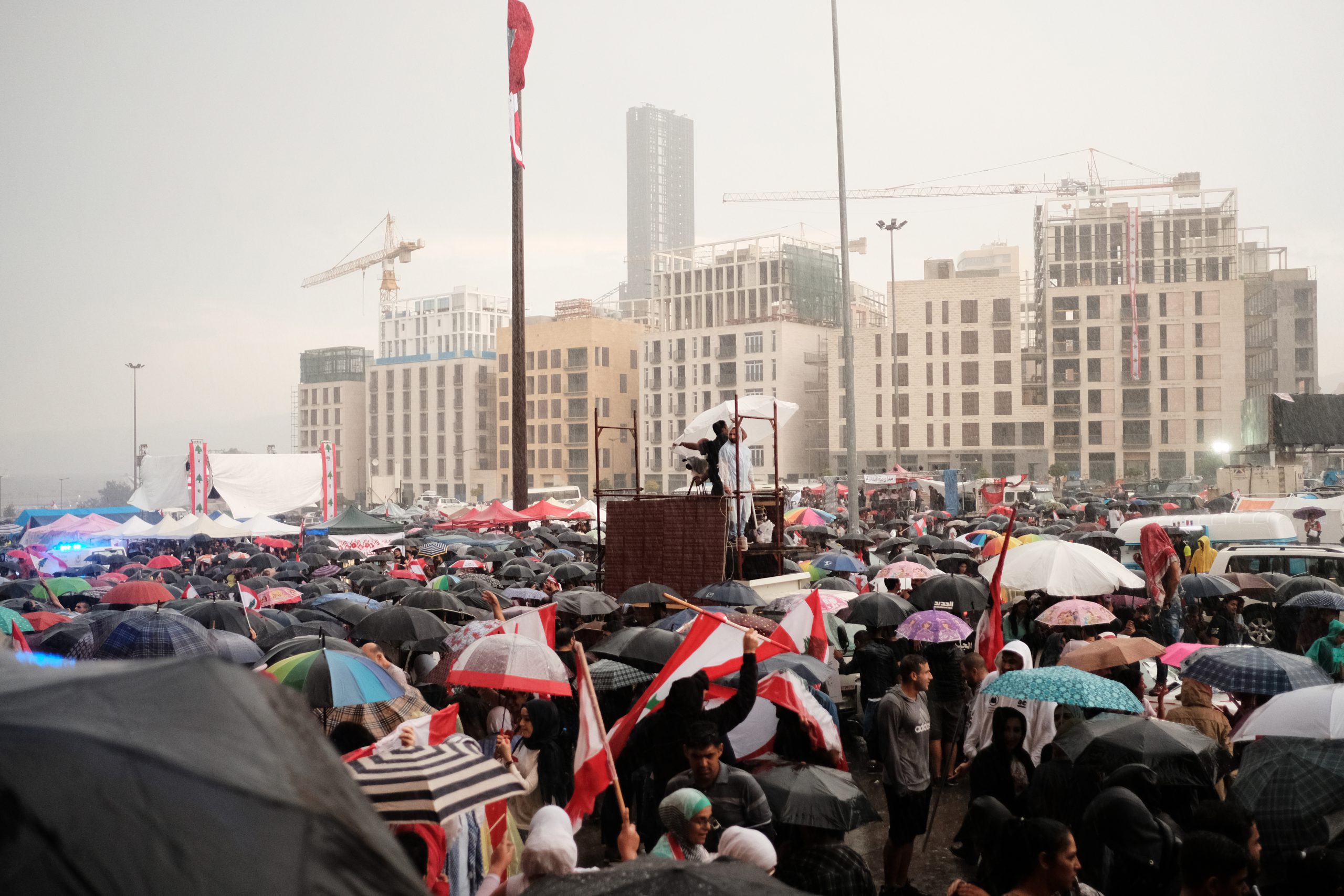 Over a week has passed since the spontaneous start of the anti-government protests in Lebanon. Hundreds of thousands of protesters have taken to the streets to demand the resignation of the one percent that has commandeered the Lebanese political scene for decades and divided the ninety-nine percent’s resources among themselves.

The protests are taking place across the country for the first time, with the will to act upon the nationwide frustration at corruption, poverty, unemployment, and a looming economic crisis going much further than Beirut’s boundaries.

When I made my way to Jal El Dib’s protest last night, it was dark and rain had already begun to flood the highway demonstrators had blocked. But protesters have organized functional communities in ways the current Lebanese politicians could only dream of.

“They turned off the electricity on us, but we’ll have two motors to light up the place within the hour,” said one man. He was standing on a stage that had been built in the middle of the highway for the protests. “And I know it’s raining, but we’re putting up tents all along the highway to keep you all coming back to the protests.”

Despite the rainfall, the size of the crowd kept on increasing. Notably on the previous day, the Lebanese army had been tasked with forcefully clearing the roads, only to be met with even more protesters taking to the streets. There is an unwavering desire to be heard, a sudden hope that has risen with these protests.

Protesters in Lebanon have taken up an incredible sense of responsibility. In the time I was there last night, I was approached by at least three different individuals carrying boxes of biscuits, croissants, and water. Others distributed Lebanese flags. Trash bags were piled neatly next to each other in one corner.

“We might as well live here,” said one friend to another jokingly. “Everything you could need is here.”

It’s not just in Jal El Dib. Initiatives are popping up everywhere, although, unsurprisingly particularly-well in Beirut, where civil society has been centralized for years.

The government can take a hint or two from Muwatin Lebnene (Lebanese Citizen), a street clean-up initiative that popped up at the beginning of the protests and now has a fully-functional sorting mechanism on the ground. The initiative is putting hundreds of volunteers to work in Beirut every morning to keep the streets clean, with kids and adults learning how to sort and recycle with them. Thousands of cigarette buds are also being collected by them to be turned into art, and they’ve just managed to expand their efforts to Jal El Dib.

University professors have taken the classroom to the streets, offering open courses and lectures in the heart of the protests and in locations such as The Dome City Center or “The Egg,” an unfinished 1960s’ cinema structure near Martyrs Square that had previously been inaccessible to the public. While the following sentence will undoubtedly turn into the title of many Western academic papers, public spaces in Beirut are being reclaimed during the Lebanese protests. And that’s a big deal when you put the “hybrid corporate monster, Solidere” in the picture.

Downtown had been deserted for years. The people have reclaimed the streets. Downtown has seen more action this week than it has seen in the past ten years. Street vendors, students, parents, artists, musicians, newly-weds, everyone is there. Ironically and pleasantly, we’re at a point where the harassment and intimidation that drove Downtown’s original residents out of the area is not working on protesters despite the initial attempts of riot police and the continuing pressure from uncompromising members of Hezbollah and the Amal Movement.

Despite this pushback from certain political parties, their “untouchable” leaders have become subject to the same scrutiny as the rest of the politicians. Protesters have shed their fears, going as far as stepping on pictures with the faces of these politicians and tearing down their photos in what were once considered their political strongholds.

“There are rumors that Amal thugs are going to try and stop protesters here,” a man in Jal El Dib spoke to the crowd on one of the very first nights. “Let them come, we’re not afraid and we’re not moving.”

There’s strength in unity. While the protests spontaneously popped up in different parts of the country, they are not isolated from each other. Last night, protesters across the country agreed to say prayers at the same time. Jal El Dib, a largely Christian area, heard both the Lord’s Prayer and the Adhan. While perhaps a bit counterintuitive for segregating religion from politics, the prayers did reflect a solid and unified front where people in Lebanon are showing compassion towards each other despite their differences.

The night before yesterday, candles were lit by protesters for those being attacked in Nabatieh. Even before that, Jal El Dib took a moment of silence to reflect on the attacks of political enforcers and losses in Tyre and Tripoli.

There’s no one leader to the Lebanon Protests. Different, independent groups of people are making it their object to help out. Women have also proven to be integral to the success of these protests. They’ve stood on the frontline, interlocking hands to form a human line between riot police and protesters in an effort to protect the latter category from attacks. One made international headlines for kicking the Minister of Education’s bodyguard to stop him from firing his gun into the air. A female journalist protected a man who was “simply distributing bread to protesters” from being arrested by keeping him on live television and refusing to stop filming when police officers requested it.

“Even if it rains fire, we’re staying until we get what we want,” echoed in Jal El Dib yesterday. The words were met with loud cheering and red, white, and green flags shooting up into the air.