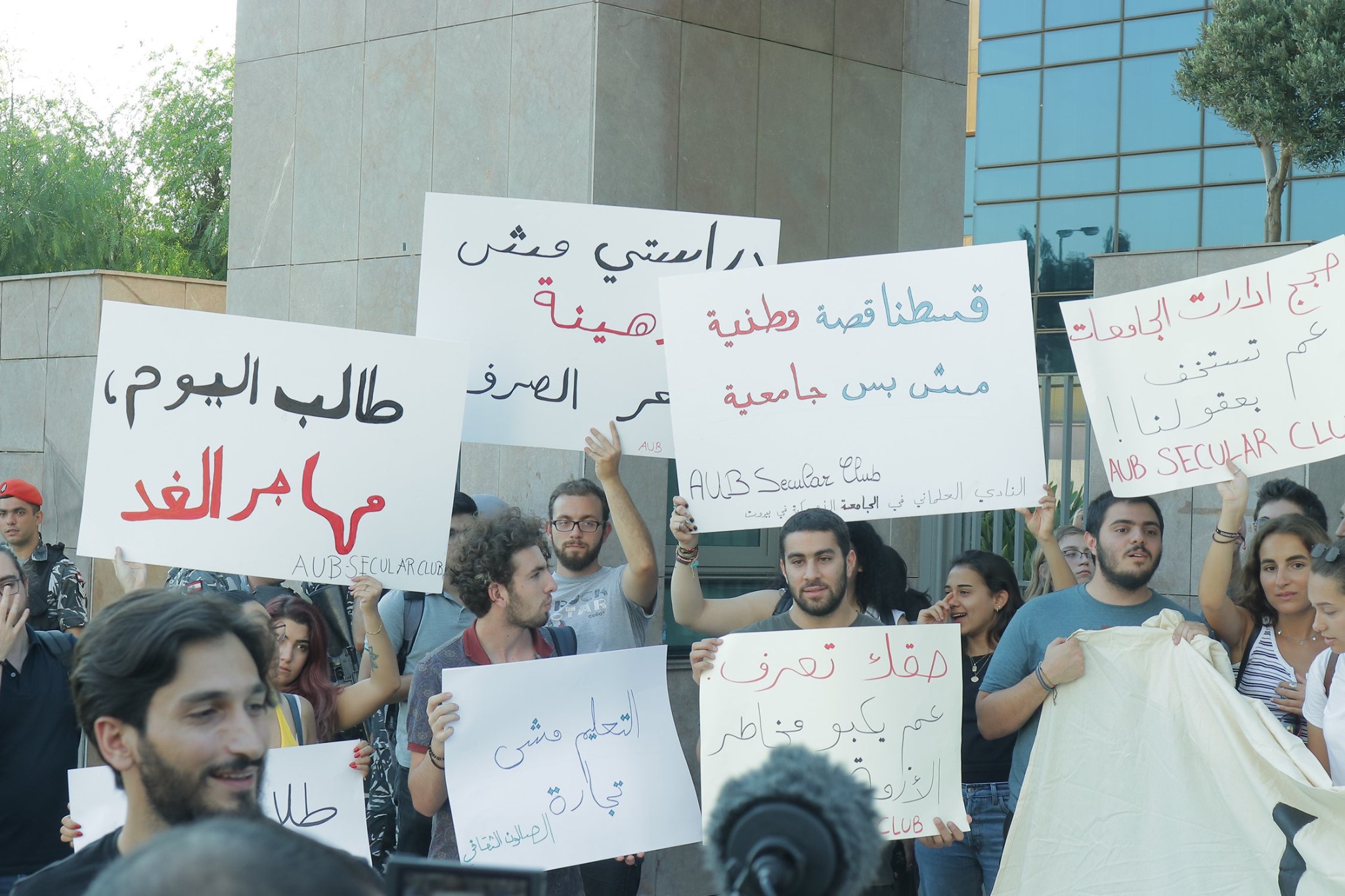 Students protest the tuition dollarization in front of the Ministry of Education in Lebanon. (Facebook | @madanetwork)
Home
Community Voices
Activism

How University Student Activists are Protesting Tuition Dollarization in Lebanon

A nationwide student anxiety spread in Lebanon following a sudden update on the American University of Beirut’s Tuition Financial Assistance page, which now states that tuition payments for the coming years will be billed in US dollars.

In other words, all payments will have to be made relative to the prevalent market exchange rate vis-à-vis the dollar currency. The policy has been implemented in the Lebanese American University (LAU) for seven years and is being discussed within the Beirut Arab University’s (BAU) administration.

Although no accessible email announcement was made by the University administration, a statement released by the AUB Secular Club put the financial update on the surface of student conversation and debate. The statement highlighted the consequences of such a decision, particularly with the midst of extensive financial turbulence in a country consistently experiencing a deficit in its balance of payments.

Based on the wider reality of the issue at hand, a statement signed by student clubs across different universities was released a few days later by the MADA Youth Network, a group co-founded by the AUB Secular Club and USJ Secular Club.

After MADA released its statement condemning the currency change and requesting an open and transparent debate between the students and the administrations, both AUB and LAU responded. The former sent a mass email to the student body, while the latter highlighted the issue on the LAU Facebook page.

Both announcements attempted to counter the statement’s claims and the analyses that followed. To justify the decision, AUB emphasized that the decision took place to support the University’s joining of the Common Application digital admissions tool.

Both universities also stressed that students can still pay in whichever currency they prefer, despite the billing of the tuition being set in US dollars. In response, the MADA network released a video and fact-checking campaign.

“The purpose of the fact-checking campaign is to correct some misconceptions which have been propagated surrounding this issue in this dire economic situation,” said AUB Secular Club President Dany Rasheed.

The video and campaign addressed several questions and arguments. The students insisted that many universities around the world under the US-affiliated Common Application procedure bill their tuition in their national currencies.

Moreover, they criticized the administration for “misleading them” and “underestimating their intelligence” by suggesting that the students can pay in different currencies, highlighting that the amount paid in Lira depends on the already unstable prevalent market exchange rate.

Demonstration Facing the Ministry of Education

“Our voices are as high as our tuition,” chanted student groups from many universities in a protest facing the Ministry of Education on August 22. The students called for the ministry’s intervention during the joint protest.

“These decisions further give us more indicators that our economic system is going to crash, and so we are here to say we won’t pay,” said Dima El-Ayache, a student activist and one of the organizers of the demonstration.

Standing in front of a large “We Won’t Pay” banner, the protesters suggested that vulnerable groups are being forced to pay the price for the financial and economic policies of the country’s political class. They also emphasized the importance of intersectionality and solidifying ties between the victims of the crisis the country is facing.

Prospects for a Nationwide Student Movement

“I think it’s important for the future that this movement be built on a large network of student and non-student groups,” said Rasheed. “This is, first and foremost, a national question that concerns all groups in Lebanon.”

Activist and director Hashem Adnan highlighted that students are not the only ones organizing. From Palestinian refugees denied their basic human rights to public employees who were subject to austerity measures as the government budget was being discussed, different groups worried about “paying the price” assembled over the past year.

“We are showing people that by networking, standing together and building a strong movement that crosses the bubbles each student club lives in, we are creating a movement based on common struggles.”