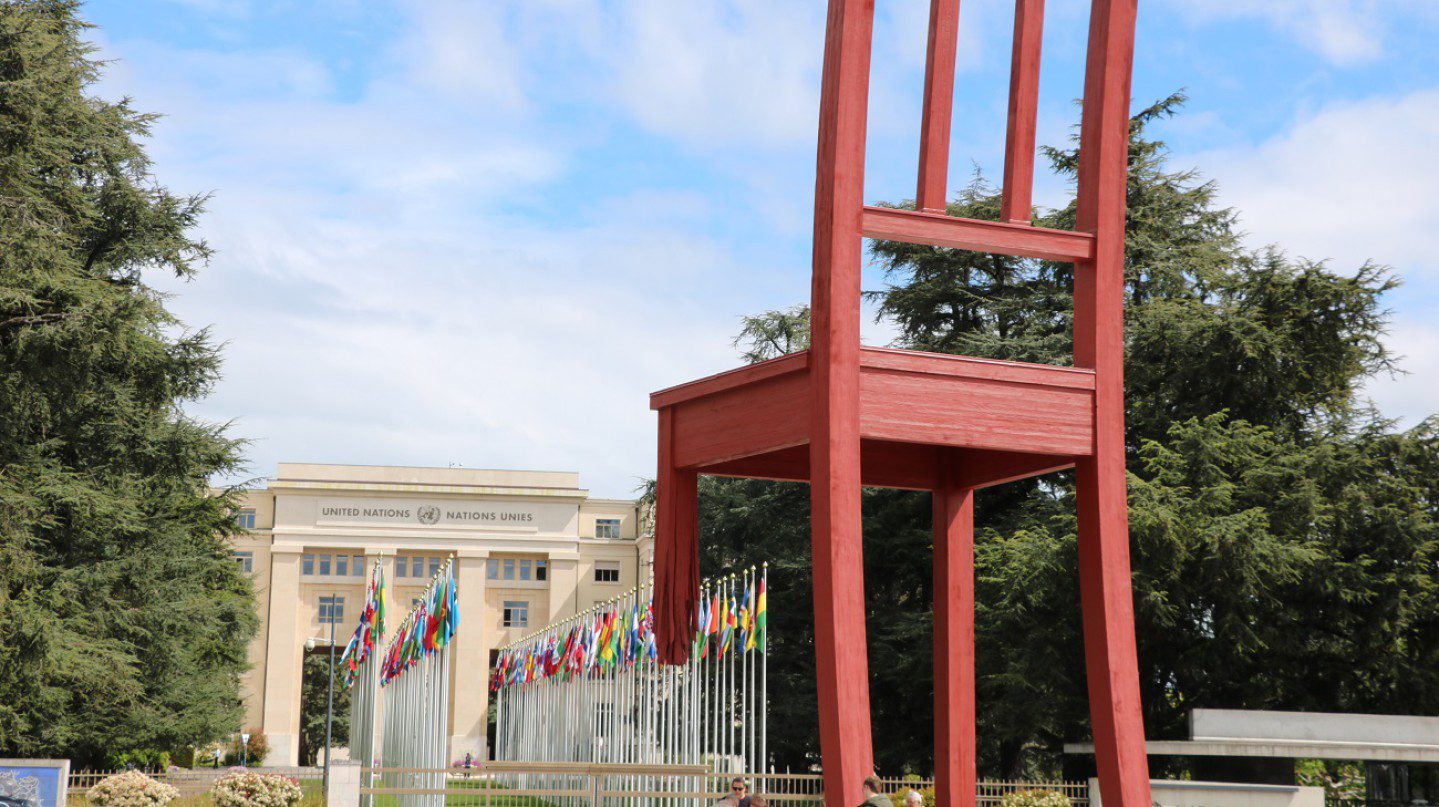 The Broken Chair, a symbol meant to call for a ban on antipersonnel landmines. (The Culture Trip | Sean Mowbray)
Home
Community Voices
Op-Ed

No one can maim their spirit: On Palestine and the UN’s broken conscience

The Broken Chair soars up into the sky at the heart of the open square of the Place des Nations in Geneva. In 1997, a treaty to ban the use of anti-personnel mines –also known as the Mine Ban Treaty– was signed and ratified. The statue stands as a testimony to that.

Designed by Swiss sculptor Daniel Berset, the giant chair with a broken leg draws people in the moment they come into the Place des Nations. In awe of this sculptural scream against the atrocities of mines, tourists and locals alike take pictures of the monument that screams for human right against landmines and cluster bombs.

Beautiful right? No, rather ironic and discriminatory.

Looking at this monument does not remind us of human rights, rather of the transgression of these very same rights and the reign of prejudice, bigotry and unfairness. To many of us, it is a constant reminder of the carelessness of the international community towards those they label “fellow humans.”

The goddess of justice, known as Dike or Themis and represented as a blindfolded woman carrying a sword, perished. With her died the International Declaration of Human Rights and the so-called International humanitarian Law in Armed Conflict. “Justice” is entombed in an ancient land known for its olive trees, its historical monuments, and its peaceful residents from different religious beliefs living in harmony. It was buried mid-way between the mosque and the church. Justice is buried in Palestine, awaiting the right time to rise again.

Pause for a few seconds, close your eyes and replace the image of the wooden chair with that of a man, woman or child with an amputated leg. There are stronger images, albeit live ones, than that fantastic chair. Beyond the sculpture exists a plethora of nightmarish images and videos of maimed Palestinians, unarmed demonstrators calling for the end of the enduring effect of a 12-year-old barbaric siege during what came to be known as the Great March of Return.

The Israeli army deliberately maimed and incapacitated as many of them as possible. No one can deny this carnage, yet very few have the moral courage to speak up or to do something about it.

In the Great March of Return, almost 90 percent of wounded Palestinians were shot in the lower limbs. The number is too colossal to be considered collateral damage, suggesting a policy to aim at the lower limbs is in place for the purpose of the obliteration of Palestinians beyond the here and now.

Doctors Without Borders (Médecins Sans Frontières) reported that the majority of the already-too-many patients admitted to its clinics were treated for injuries “where the bullet has literally destroyed tissue after having pulverised the bone.” Doctors who operated on such victims were devastated by the amount of measured harm and barbarism inflicted.

The Broken Chair is made of wood and is simply broken. End of story. The chair is not in pain, nor psychologically devastated or injured beyond the present. This is very different from the maimed Palestinians whose legs cannot simply be put back and for whom bygones cannot simply be bygones. The entire lives of these fellow humans have been damaged beyond redemption.

They will live a future with no, or very limited, productivity and will need multiple surgeries in a country where the medical system is being equally maimed through the siege and the silence of a universe succumbing to dogmatic slumbers. As noted in 2017 by queer theorist Jasbir Puar in The Right to Maim, debility implies violence that is exacted on bodies to deprive them of resistance.

The Broken chair is a reminder of the broken conscience of many, including the United Nations which ironically was recently celebrating the International Declaration of Human Rights, Arab countries and many others. It is their conscience which is maimed. The chair was meant to stay for a few months, yet it still stands in the midst of the Place des Nations as an everlasting reminder of the Mine Ban Treaty. So too, Palestinians will forever remain in Palestine, maimed or not. No one can maim their spirit.