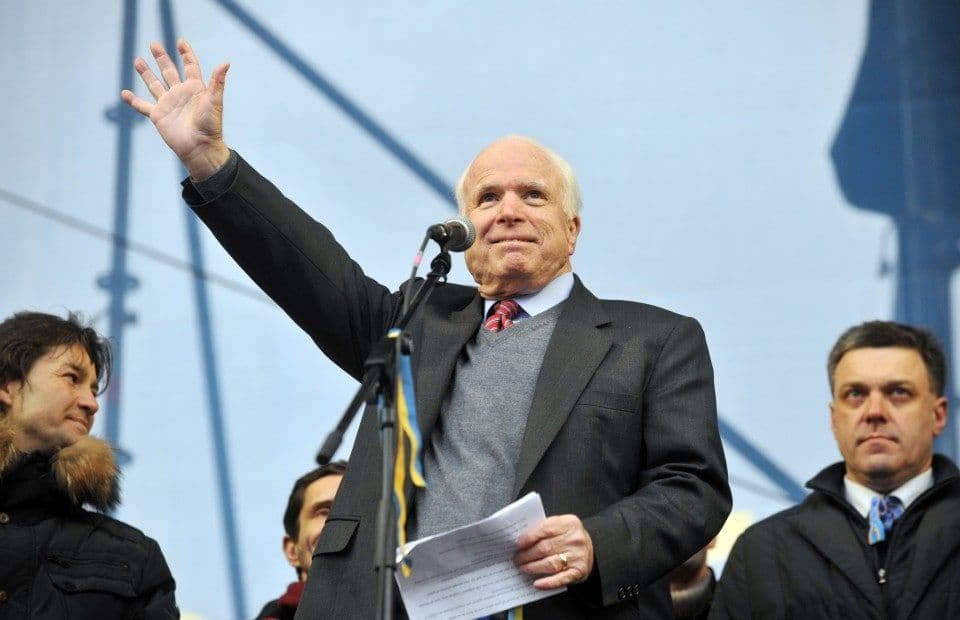 John McCain: Why are Democrats simpering over a corrupt war criminal?

Liters of ink have been spilled over the legacy of John McCain, the senator from Arizona and former presidential candidate who died one week ago on August 25th. With several exceptions among left-wing outlets and those based outside the United States, the memorials of the past seven days have been glowing. McCain’s actual record shows a long history of warmongering, corruption, and evasiveness.

A short but documented history of McCain’s politics

It is impossible to give a full account of the conflicts McCain supported, considering there has not been a major conflict during his tenure in government that he did not support vigorously. Not only was he most famously an architect of the Iraq War (when asked his opinion regarding George W. Bush’s statement that troops could remain in Iraq for 50 years, McCain replied “Maybe 100”) but he supported the Saudi intervention in Yemen, increased US bombing campaigns and troop deployments in Syria, and the destruction of Libya.

McCain’s participation in the Vietnam War is equally revealing.  An inveterate nepotism case, McCain found himself a naval pilot despite his record of sub-par flying.  Of course, his father was an admiral in the US Navy, the Commander of the Pacific, the commander of all US forces in Vietnam, including his son.  The younger McCain fought in Operation Rolling Thunder, which was one of the most extensive bombing campaigns in human history, and extended the war, illegally, across the Vietnamese border into Cambodia and Laos. California Representative Barbara Lee introduced a bill to assist victims of “Agent Orange,” the chemical weapon the US dropped on Vietnam, which, during his more than 20 bombing runs over populated cities McCain himself could have dropped.  This bill died in the House, with no words of support from the “Maverick” Senator McCain. More than two million civilians were ultimately killed during the US war on Vietnam.

Apart from war, his record is equally reactionary. At every turn, he vigorously opposed progress and human rights. Nowhere is this more clear than in his steadfast refusal to sanction Apartheid South Africa’s government. John McCain voted, six times, in opposition to sanctioning the savage apartheid regime, as the international community was rallying around the cause to isolate the government. Within US domestic politics, McCain has fought against women’s rights, voting rights, and stood in defense of the Confederate American Apartheid flag, later opposing it before supporting it again.

McCain’s corruption is also worth discussing, albeit briefly. The so-called “Keating Five” Scandal has largely faded from memory, even in the United States. Yet, John McCain was one of those five Senators and Members of Congress. Charles H. Keating, an Arizona (the state McCain represents) developer, found his company Lincoln Savings and Loan, under threat of seizure by the Federal Government in 1987. McCain stepped in, along with the four other  officials, to protect his valuable constituent. Financial regulators repeatedly attempting to investigate Keating, who had defrauded his investors, were foiled by his five defenders, who were paid off handsomely by Keating. McCain’s family had invested more than $300,000 in Keating’s buildings, and Keating himself directly donated hundreds of thousands more to McCain’s political races.

Why the Democratic praise?

The important question is not how we should feel about the death of John McCain. It’s clear that anyone with a sense of compassion may feel something for his family, but the world is undoubtedly a better place without John McCain.  In fact, it’s entirely plausible his death may have delayed the possible war with Iran he had so long crooned for. The question, rather, is why are so many ‘champions’ of the Left, mainstream news outlets, and the Democratic Party, bemoaning his loss, and delivering soaring orations about his honor and value to the US?

The Washington Post ran with the headline “The human rights community lost a champion.” The caption underneath his picture reads: “Sen. John McCain (R-Ariz.) waves to protesters during a mass rally of the opposition in Kiev, Ukraine, on Dec. 15, 2013.”  Who, one might ask, is the grim-looking man to Senator McCain’s right? He remains unlabeled in the photograph, and for a reason. The man is Oleh Tyahnybok, Neo-Nazi and leader of the Svodoba political party. His description of the Nazi aligned Ukrainian forces of the 40s is revealing: “They were not afraid and we should not be afraid. They took their automatic guns on their necks and went into the woods, and fought against the Muscovites, Germans, Jews and other scum who wanted to take away our Ukrainian state.” He has also been photographed (this time not with McCain) raising one hand in the famous Nazi Salute.

The Washington Post may stand alone in its incompetence for standing their “hero” next to an actual Nazi, but by no means did they stand alone in their glowing appraisal of McCain. Even Senator Bernie Sanders, Democratic ‘Socialist’ and darling of the Left, and Alexandria Ocasio-Cortez, US House Representative from New York and also a self-described ‘socialist,’ wrote touching tweets praising McCain’s honor, decency, and service. Ocasio-Cortez’s shocking primary victory over a long term Centrist congressman was seen as a victory for the left.

Why would the Democrats, and these two in particular, praise someone who fought against the very principles they stand for? For the former, the answer is simple. Democrats, particularly the more Centrist politicians, have stood behind McCain in his warmongering. Senator Chuck Schumer, the Democrat Majority Leader, even supported President Trump’s airstrikes against Syria in a tweet: “A pinpointed, limited action to punish and hopefully deter Assad from doing this again is appropriate, but the administration has to be careful about not getting us into a greater and more involved war in Syria.”

Democratic Congressman Jim Langevin from Rhode Island, a thoroughly Democratic state, mirrors this sentiment in his statement on the strikes, going to great lengths to explain how President Trump needs a comprehensive plan for Syria, yet still hoping the “strikes will achieve their goal.”

Sanders and Ocasio-Cortez present a more complicated issue. Sanders opposed the Iraq War, and Trump’s war on Syria. Ocasio-Cortez ran her campaign as a candidate who opposes imperialism on some level.

The answer can perhaps be found in McCain’s rhetoric. While having stood by Trump on most key policy issues, he did clash verbally with the president on repeated occasions.  His pallid opposition drew praise from Democrats, both Centrist and Left wing alike, and appears to have induced a level of amnesia regarding his wider record. This is no way to run a “Resistance.” It is entirely possible that Democrats will pay at the ballot box for this lack of moral clarity, in 2018 and, more troublingly, in 2020.