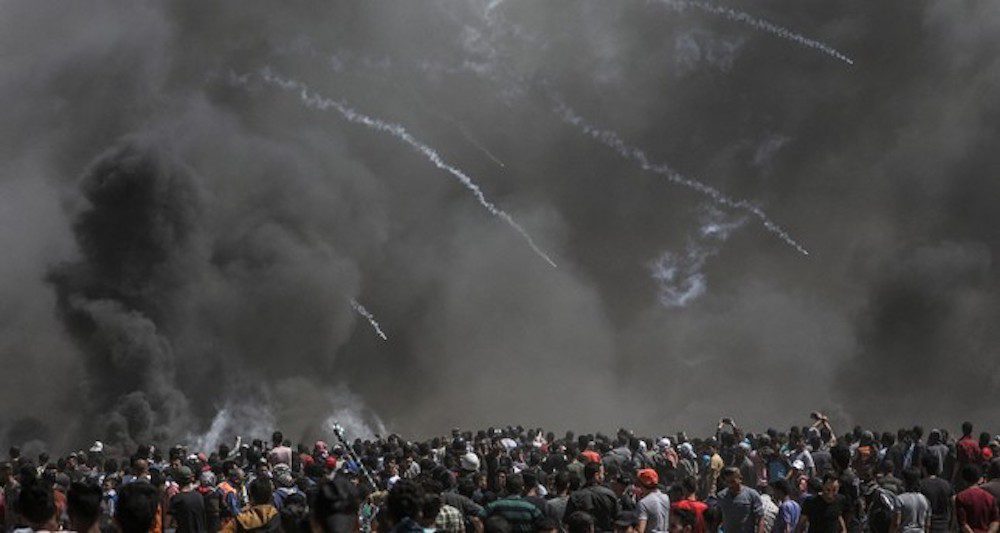 Israeli army fire tear gas grenades at Palestinian protesters during clashes after protests near the border with Israel in the east of Gaza Strip, 14 May 2018. (EPA Photo)
Home
Community Voices
Op-Ed

Each year, Palestinians inside the land of historical Palestine and in the Diaspora commemorate Nakba Day and demand the right of return of Palestinian refugees. In the various events commemorating this day, Palestinians emphasise, alongside the establishment of the Palestinian State and the right to self-determination, the inalienable right of return of Palestinian refugees, as a right that does not fall into statutes of limitation. This year, Palestinian commemoration of the national landmark is entangled with rage, with the opening of the US embassy a day before Nakba Day after the unilateral “recognition” of Jerusalem as the capital of Israel by President Donald Trump.

Nakba Day refers to the ethnic cleansing of at least 700,000  Palestinians and the complete destruction of over 500 villages that took place between 1947 and 1949 to make way for the establishment of Europe’s latest colonial enterprise, the State of Israel, in 1948 as a direct solution to European anti-Semitism.

Since its establishment, Israel has continued, with impunity, to violate the most basic principles of international law and human rights, suggesting that, in accordance with the Charter of the United Nations, the sovereign equality of all nations remains nothing more than a beautifully phrased slogan that is void of practical meaning. Firstly, Israel has subjected Palestinians who remained within the borders of the newly established State to military rule for 17 years, effectively subjugating them into second class “citizens” in their own homeland. Furthermore, the occupation of the remainder of the land of historical Palestine in 1967 resulted in another wave of Palestinian refugees and the annexation of Jerusalem, paving the way for the systematic targeting and forced displacement of Palestinians.

Despite coinciding with the decolonisation period, where a significant number of nations enjoyed and practiced their right to self-determination, this Western-supported complete control over the land of historical Palestine has enabled the expansion of the Israeli settler-colonial enterprise. Subsequent Israeli governments have relentlessly pursued a programme to maximise the acquisition of Palestinian land with the least number of Palestinians on it, thereby continuing the Nakba to date. These policies and measures include continued settlement expansion and denial of the right of the Palestinian refugees to return; Judaisation of Jerusalem; fragmentation of national identity; and compromise and appropriation of cultural heritage. This, in turn, has enforced the trickling down of Palestinian demands due to the global silence that has enabled the persistence of Israeli colonial policies and the altering of the status quo, culminating in the continued denial of the right of the Palestinian people to self-determination.

This year’s commemorations of Nakba Day are different. Trump’s decision to announce the opening of the embassy one day preceding Nakba Day, the day that Israel celebrates as “Independence Day,” further provokes Palestinians. It remains unclear who  Israel was gaining independence from: perhaps from the indigenous population that has been inhabiting Palestine for thousands of years?

Within this framework, Palestinians’ commemoration of the Nakba is entangled with their rage against this insolent and irresponsible move, manifesting in mass protests. These are mainly taking place in Gaza, where the vast of its population consists of refugees who have been under siege since Israel’s unilateral disengagement in 2005 that left Gaza under Israel’s complete aerial, naval and territorial control. This siege has rendered life in Gaza intolerable, with an average of four hours of electricity per day, and 95 percent of the water undrinkable. The rage Palestinians in Gaza are experiencing is gaining expression and traction, and has renewed forms of creative resistance, which commenced on 30 March to mark Land Day, highlighting the perception of the need for active and organised steps to resist the systematic targeting by Israel and its supporters to liquidate, compromise, and eventually eliminate the Palestinian cause.

Consequently, the global and regional reaction towards these protests to both commemorate Land Day and Nakba Day and to protest the opening of the US Embassy in Jerusalem reflects the global order’s and international community’s audacity, hypocrisy and double standards in the selective implementation and enforcement of international law.

Firstly, the authority that the POTUS has over Jerusalem and the determination of its status remains absent. Secondly, the sacred practice of democracy has brought about a person like Trump into public office, with severe ramifications that reverberate far beyond the borders of the USA. The current POTUS is incompetent and fails to fulfil the basic requirements of his post and do his homework, as demonstrated in his inability to realise, before “recognising” Jerusalem as the capital of Israel,  that the “ultimate” peace deal was possible when the Palestinian people made significant concessions in the form of the Declaration of Principles and subsequent agreements as part of the so-called peace process. This farce of a peace process, brokered by an evidently biased actor, not only epitomise the hypocrisy of ‘global north’ countries and the weakness of ‘global south’ countries, but also have given cover to Israeli policies that amount to international crimes, including war crimes, crimes against humanity and possibly genocide. 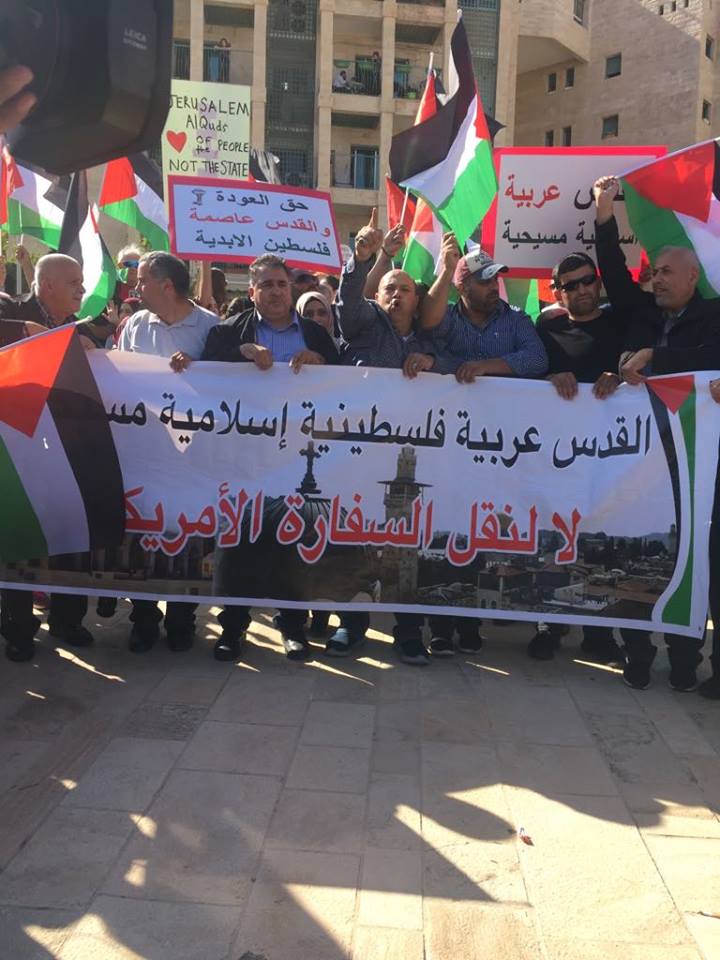 Alternatively, aren’t freedom of expression, assembly and press basic tenets of democracy and fundamental human rights? As a Palestinian who was born and continues to live under occupation, am I not entitled the right to protest and resist a flagrant occupation that has denied me my right to self-determination for 70 years? Or is it also here that we outright observe the selective implementation of democratic value and the double standards in the enforcement of international law? Isn’t the damage and suffering that their actions have already inflicted sufficient for the Western world? This includes the Balfour Declaration, whereby the universe’s most ancient colonial power gave a land they did not own to a people who are not entitled to it. More recently, it is these countries that continue in their arms trade with Israel and persist in its protection at the United Nations by shielding it from any form of criticism, censor or sanction through the use of the veto in the Security Council. The whole practice of giving five nations the power to annul the decision of some 190 other nations is not democratic in and of itself, considering the alleged sovereign equality of all nations. It seems that ‘global north’ countries do not remorse their colonial history and heritage and its severe implications on the development of so-called third world countries that persist until today. Doesn’t the murder of some 60 Palestinians and injury of over 2,000 within the span of 24 hours in Gaza require “humanitarian intervention” or does that only apply to Syria? It remains that these countries do not realise their audacity in the construction and selective enforcement of “principles,” whose true purpose is to perpetuate their hegemony in neo-colonial methods of global control, subjugation and domination.

The modest condemnation by the international community and Arab States and lack of solid action against such atrocities has effectively dehumanised and reduced the value and significance of Palestinian human life to the numbers of Palestinians killed, injured, crippled and left with disability, neglecting the need to intervene for the sake of human lives that are left severely damaged, possibly permanently. Slogans such as “now is the time to stand by Palestine and say enough is enough to the longest-standing occupation in modern times” as uttered numerous times by Palestinian officials in the international arena, including the United Nations, now seem void and naive in light of the continued inaction of the international community for so many years.

This makes Palestinian unity, starting with social and political reconciliation, more than crucial, to adopt strategies and measures that collectively face and resist this horrendous programme seeking to effectively finish off the Palestinian cause once and for all. In light of the complicity of the ‘global north’ in this agenda and the effective marginalisation of the vast majority of the world’s nations, it remains prudent to appeal to the consciousness of the people of the free world and demand the adoption of active steps to strengthen and advance the Boycott, Divestment and Sanctions movement against Israel and corporations complicit in the persistence of the occupation and denial of equality for Palestinian citizens of Israel and the right of return of Palestinian refugees. Only then, there would remain hope to salvage whatever is left of a failing humanity.