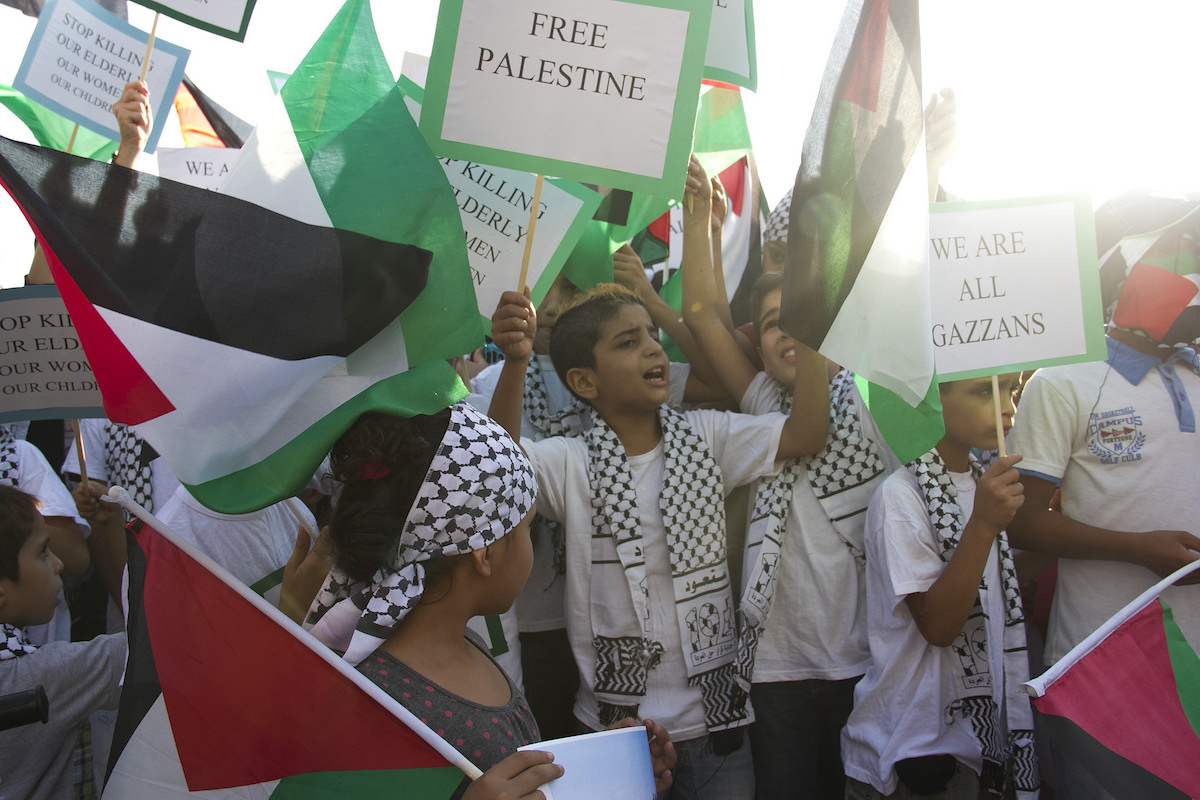 Is Gaza under the belligerent occupation of Israel?

Protests erupted in Gaza on the 42nd anniversary of Land Day, where 33 Palestinians have been killed and more than 1,500 were reportedly injured. Protests that call for the Right of Return persist; Israeli Defense Force (IDF) continues to exercise violent methods in response, as demonstrated by the March 30 incident. Humans Rights Watch has condemned Israel’s actions as “unlawful and calculated,”and the United Nations (UN) has called for an investigation of these events.

Israeli Prime Minister Benjamin Netanyahu “praised” the Israeli troops on the border, and stated that “Israel acts vigorously and with determination to protect its sovereignty and the security of its citizens.”

As Palestinians plan a six-week sit-in along the border between Israel and the Gaza Strip, Fawzi Barhoum, a spokesman for Hamas discussed the protests.

“The large crowds… reflect the Palestinian people’s determination to achieve the right of return and break the siege [on Gaza] and no force can stop this right,” said Barhoum.

However, the case of Gaza is not only one that is limited to ending an 11-year siege that has had catastrophic humanitarian and economic effects, with 80 percent of Gazans barely surviving on international aid and 60 percent living under the poverty line. After its unilateral disengagement from Gaza in 2005, after a 38-year long occupation, Israel still exercises a large portion of authority over the Gaza Strip in various ways, such as access to water and electricity, and control over Gaza’s borders.

The degree of authority and control that Israel exercises over the Palestinian territory, begs the question of whether or not the Gaza Strip can still be considered occupied, even if the IDF is not physically present.

The laws of occupation under International Humanitarian Law (IHL)

According to Article 42 of the 1907 Hague Regulation, occupation exists and “a territory is considered occupied when it is actually placed under the authority of [a] hostile army. The occupation extends only to the territory where such authority has been established and can be exercised.” International Crescent of the Red Cross (ICRC) elaborates that “occupation may be defined as the effective control of a foreign territory by hostile armed forces.”

The Hague Regulations also outlined the role of the occupying power in Article 43.

“The authority of the legitimate power having in fact passed into the hands of the occupant, the latter shall take all the measure in his power to restore, and ensure, as far as possible, public order and safety, while respecting, unless absolutely prevented, the laws in force in the country,” reads the article, meaning that the occupying power has the right to exercise authority over occupied territory.

“Persons protected by the Convention are those who, at a given moment and in any manner whatsoever find themselves, in a case of a conflict or occupation, in the hand of a Party to the conflict or Occupying Power of which they are not nationals,” states the fourth article.

Is a territory is still considered occupied even if the “hostile army” is not physically present in the territory in question?

The case of Gaza

Although Israel has made claims that the occupation has ended, the Israeli High Court of Justice (HCJ) has stated that “the creation and the continuation of an occupation does not depend the on the existence of an institution administering the lives of the local population, but only on the extent of its military control in the area” in one of its earlier rulings.

In addition, numerous humanitarian law experts also maintain that in order for a territory to be considered occupied, it does not necessarily entail that a military is required to have a fixed presence in the occupied territory.

“Effective control may also exist when the army controls key points in a particular area, reflecting its power over the entire area preventing an alternative central government from formulating and carrying out its powers,” they argue.

Since 2005, and even after its disengagement from the Gaza Strip, Israel still maintains  control over Gaza’s borders, airspace, and ports. The extent to which Israel has control over Gaza creates a reasonable basis to assume that it amounts to “effective control,” despite the physical absence of the IDF in the Gaza Strip. The effective control exercised by Israel, in turn, amounts to an occupation.

After Hamas won the parliamentary election, a tight blockade, and eventually a siege, was set in place in 2007. Two out of the three border crossing points are controlled by Israel, and Egypt controls the third, all three of which have been largely kept shut, limiting what comes in and out of Gaza, even basic necessities.

Furthermore, Israel imposes restrictions through a permit system that requires Palestinians in Gaza to get “difficult-to-obtain” permits if they intend to leave the Gaza Strip, making exiting Gaza for any reason futile.

This blockade has also hindered Gaza’s economy. By determining what is imported into the Gaza Strip, Israel’s siege has resulted in the “de-development” of Gaza’s economy, leading to crippling unemployment within the context of a worsening humanitarian situation.

This situation was exacerbated further by Operation Protective Edge in 2014, where Israel “launched a relentless air assault on Gaza,” that led to the loss of 96,000 homes. According to UNRWA, the infrastructural damage that resulted from the operation would require almost $720 million dollars to repair, including the major damage to Gaza’s sole power plant, and its pipeline and sewage treatment infrastructure.

Gaza is currently experiencing an electricity crisis, where the Gaza Strip receives up to three hours of electricity per day. Eighty percent of its electricity is supplied by Israel, while Egypt provides twenty percent.

Not only has Gaza’s power crisis affected hospitals, but it has also affected its water quality, where 97 percent of Gaza’s water has become unsafe to drink. Due to Israel’s siege, access to basic necessities such as clean water, food, and healthcare have become more difficult, and any attempts at reconstruction have been rendered impossible.

The reality and what it means to be occupied

Is Israel required to fulfill its obligation under IHL and protect civilians during armed conflict? According to B’Tselem, even if the Gaza Strip is not considered occupied, and even if Israel argues that an armed conflict exists between it and Palestinian organizations, Israel has an obligation under the Fourth Geneva Convention to “protect the wounded, sick, children under age fifteen, and pregnant women, enable the free passage of medicines and essential foodstuffs, enable medical teams to provide assistance, and refrain from imposing collective punishment.”

Israel also has obligations to uphold the Universal Declaration of Human Rights (1948) under the six international conventions that it has ratified, and ensure the right of every person to freedom of movement, to work, to an adequate standard of living, education, to adequate health care, and to family life.

While bearing this in mind, taking into consideration the poor living condition in Gaza, and the belligerent operations that Israel has carried out since its disengagement are all indicative of not only the evasion of its responsibility as an occupier, but also the evasion of its responsibility as a party to an armed conflict, thus violating the Fourth Geneva Convention, and basic human rights.