On Sunday Feb. 11th, the Waste Management Coalition organized a sit-in in the Riad al-Solh Square to protest the expansion of the landfills and the installation of an incinerator. This has come as a result of the Lebanese government’s paralysis and failure to come up with an adequate waste-management plan has left the country with an on-again off-again looming waste crisis that has  posed grave health risks on its residents.

The government has opted to expand the landfills in Costa Brava and in Bourj Hammoud, which receive an average of 2400 tons of trash per day, and have resulted in the environmental and economic degradation of areas surrounding the landfills, waste overflow, and air, surface water, and groundwater pollution. These waste overflows are reportedly one of the sources of the infamous incident in January of this year, where trash had washed up in the shore of Zouk Mosbeh.

In addition, in mid 2017, media outlets began to report the Beirut Municipality’s plan to opt for a “waste to energy” technique as a solution to the waste crisis. However, this waste to energy technique would consist of waste incineration in Beirut. Potential locations for the installation of an incinerator include Karantina and Bourj Hammoud, where residents of Karantina had organized a protests along with their political representatives to express their outrage at the disastrous effects that it would have on their health.

However, with renewed fears of installing an incinerator in Beirut and the escalating price that the residents of Lebanon are paying for the lack of a proper solution to the waste crisis, several organizations, civil society groups, as well as environmental experts and activists thought to form a coalition in order to push for efficient waste management in Lebanon generally, while focusing their work on Beirut. Waste Management Coalition (WMC) aims to bring to light sustainable solutions as well as spread awareness on the subject itself.

The occasion was meant to raise awareness on the risks that would accompany the implementation of an open burning policy, as well as call for immediate action. Beirut Today spoke with several activists, most of which were organizers, to get to know more about the coalition, the sudden motivation behind the sit-in, and how they aim to implement an action-oriented strategy. Will it be through opposition or negotiation?

The sit-in was also organized to provide attendees with all the answers to questions on the waste crisis, as well as to introduce the coalition, and provide resources to know more about contributing to the entire process.

Before the meeting point, there was a desk for people to sign in their names for a petition to end waste mismanagement in Lebanon. Also,  A group of experts were spread out in the Square, to guide attendees on the dangers of incineration and the expansion of landfills, and by answering any questions they might have about the crisis and available alternatives. Additionally, the coalition members were spread out for media purposes. 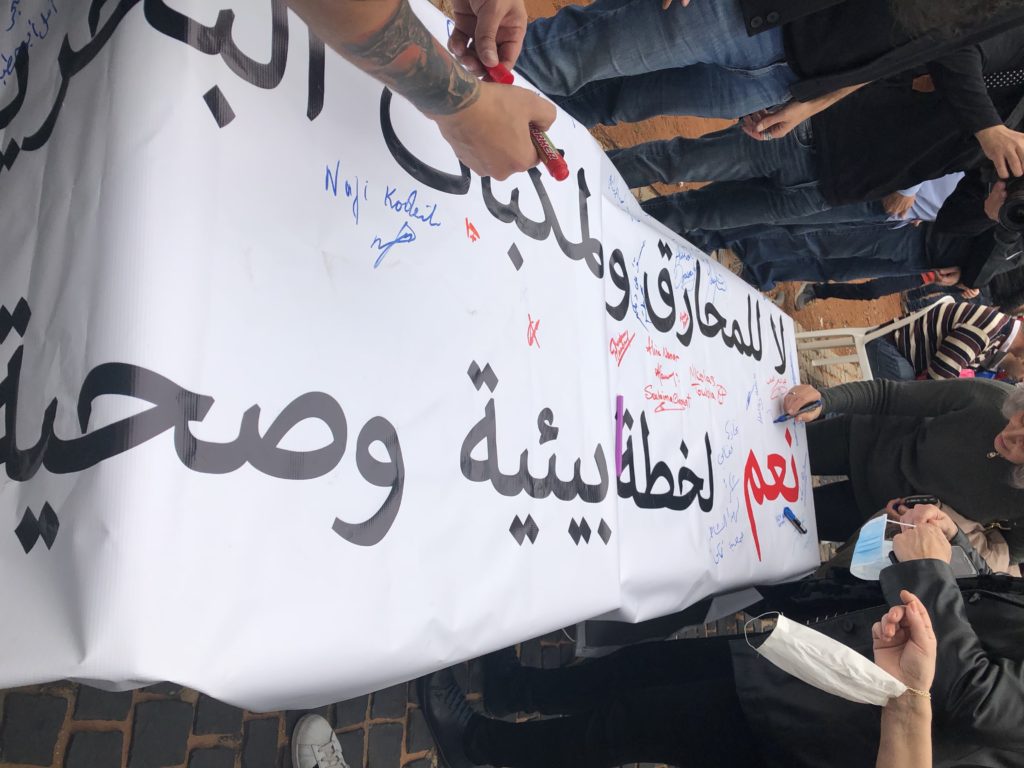 Paul Abi Rached, Founder of ‘El-Ard Lebnen’ organization—a member of the coalition, told us that the sit-in is a direct response to “the Council of Ministers’ decision to expand the Bourj Hammoud and Costa Brava landfills, and establish  incinerators across Lebanon.” Abi Rached  affirmed that the work being done right now is only another end to what has been “in the works since the 2015 protests.”

Abi Rached also reminded us of the importance of hierarchy when it comes to waste management: “If the government uses its authority to push municipalities to recycle and compost waste leading to energy recovery, we wouldn’t be there right now!”  and proceeded to inform us that “there is a consensus at WMC that 80% of the waste that we produce should either be composted or recycled, and should not go into landfills or incinerators. The rest of the 20% of the waste can be used for energy recovery or even other innovations such as Ziad Abi Chaker’s “eco boards”. And any other remaining waste that may still have “calorific” value can be made into RDV (refuse-derived fuel) for factories.”

“The solutions are available. They are environmentally-friendly and would only boost our economy,” Abi Rached said.

In order to set an example and to assure protesters and the surrounding crowd of their message to promote alternatives, the WMC made sure to include recycling bins. 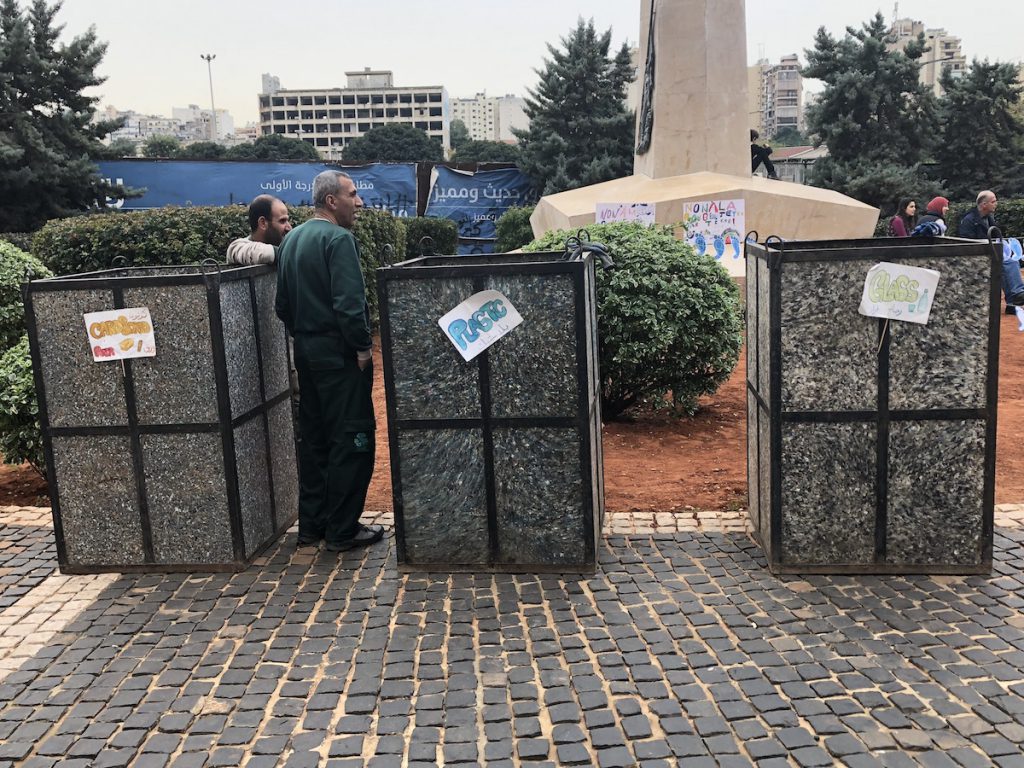 When asked about the motivation behind the establishment of this coalition, Samar Khalil, environmentalist and member of the coalition, said that “there are many groups active on-field, working individually on waste management. We tried to gather ourselves and got to know each other’s’ work better in an attempt to unify efforts and end up with more effective actions. After seeing that joined efforts are taken more seriously and have been proven to be effective, we decided to form the Waste Management Coalition.”

Khalil also described the structure of the coalition which takes the shape of working groups like communications, legal, technical etc. She invited all citizens to visit the website and fill the membership form. Interested citizens would be asked to attend meetings and would eventually join the working group that interests them the most.

“The fact that we are acting as a group made up of members with diverse expertise, we can implement a change on ground. As a coalition, we will not be supporting any of the electoral candidates supporting incinerators. We will be negotiating with authorities to try and change the status quo, and if no response was noted, we will be dealing with this legally through appeals, one of which is in the works for Costa Brava landfill, as actions like establishing incinerators would undoubtedly pose health risks on the residents of Lebanon,” she added.

Khalil sought to send a message to the residents of Lebanon: “The crisis is not yet over even if you do not actually see the waste on streets. Each one of you has a powerful role in mitigating the crisis  be it through reducing waste production, composting, and recycling. As a resident, you need to be aware of what’s going on politically and environmentally. There is a huge amount of waste being dumped into our waters which is not only reducing biodiversity, but it is also putting our lives, your life, at risk.”

Indeed, it is high time for an innovative movement to thrive from within the public realm, and to demand transparent policy-making, especially when it comes to the field of waste management. This time, the matter is not about how much money is being withdrawn from bank accounts, but it is about raising public consciousness on the hazardous practices that are detrimental to their health and present them with alternatives.