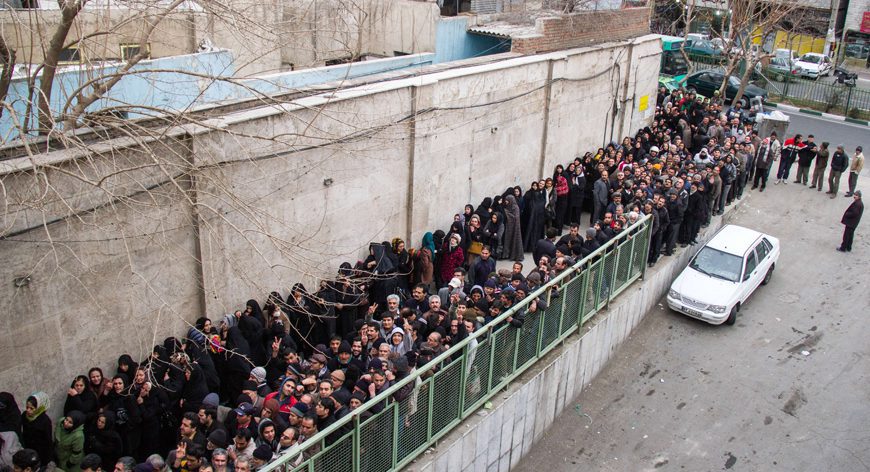 Poverty and Living Standards in Iran After the Nuclear Deal

Many observers in the West have been quick to blame the recent unrest in Iran on high and rising poverty, which is in turn seen as a failure of the Iran nuclear deal (also known as the JCPOA), or the squandering of its windfall.  President Hassan Rouhani sold the nuclear deal to voters, who have elected him twice, as the only way he could improve their lives.  The unrest taking place in Iran’s smaller cities suggests that this promise is far from realized.  As I have written before, there is little doubt that the economy rebounded after JCPOA, but did poverty and the living standards of ordinary Iranians also improve with this economic recovery?

The only reliable source for answering this question is Iran’s Household Expenditure and Income Survey (HEIS), collected by the Statistical Center of Iran (SCI) every year since the 1960s.  It is available to researchers in unit record form since 1984, and the latest round for the 2016/17 (21 March 2016 to 20 March 2017) is available here (in Persian).  This round reports on living standards since the nuclear deal went into effect, in January 2016 (it had been signed on July 14, 2015, but did not really take effect for another 6 months).  We would expect the impact of the agreement, if any, on living standards to be visible in the data collected for this round, which begins after March 2016.

I have reported extensively on this subject before, in a 2017 paper which included survey data until 20 March 2016, only the last few months of which were after the nuclear deal. In this post, I update some of the findings of that paper with the latest round of the survey using the methodology described in that paper.

I make my points using two graphs, one showing changes in average real per person household expenditures (pce, for short), deflated using the consumer price index and adjusted for the differences in the cost of living between three areas: metropolitan Tehran (home to about 16% of Iran’s population), urban areas (58%) and rural areas (26%).  The second graph uses the same data to calculate the percent population in these regions who live below a designated poverty line (known as the Headcount Ratio).

Notes: All values are in 2016/17 rials per person per day. The graph for median values of the pce is very similar.
Source: HEIS files.

Two important points are worth noting here. The first is the divergence in living standards (measured by per capita expenditures) between Tehran on one side and the rest of the country on the other. This is the “Rouhani effect,” the result of austerity that brought down inflation but cost job growth, regressive policies such as raising energy prices while letting the value of cash transfers decline, and other policies favoring businesses and the middle class who predominantly reside in the capital.  It is interesting to note that the divergence in the fortunes of Tehran and the rest of Iran further confirms the role of economic grievances in the current protests.  Unlike in 2009, when Tehran was the center of the protests, the recent unrests have mainly occurred in smaller cities.

Second, this graph shows that living standards in the rest of Iran started to improve in 2016/17, after the nuclear agreement had (partially) gone into effect.  This could be the “JCPOA effect”, which is positive and is in line with the 11% of growth of GDP in 2016/17 reported by SCI.

Turning to poverty, Figure 2 shows steadily increasing poverty rates for urban areas since 2012, which is in line with the point I just made about the geography of the unrest, located in smaller cities.  Rural areas experienced a sharp increase in Rouhani’s first year in office and remained high. There is little evidence in this graph of a positive JCPOA effect for the poor living outside Tehran.  Clearly, the trickling down of the 11% GDP growth had yet to happen by 2016/17.  The good news for JCPOA is that economy has continued to grow in the first six months of 2017/18, according to the SCI, but we do not yet know if this growth has started to reach down more widely to the poor in smaller urban areas.

Note: The poverty line used here is $7 PPP per person per day for Tehran, $5 for urban areas and $3.60 for rural areas.

This graph also shows the effect of Ahmadinejad’s cash transfers on poverty that started in 2011 as part of his subsidy reform program.  How do we know it is cash transfers that reduced poverty after 2010?  How else would poverty rates come down when the real average (and median) expenditures for urban and rural areas were declining, as seen in Figure 1?

A second quick takeaway from this graph is the generally low rate of poverty in Iran — 4.7% for the country as a whole in 2016/17, using my poverty lines, which are appropriate for  comparison with Iran’s middle income counterparts.  In light of these numbers, I do not see how one could attribute the current protests to high poverty; to joblessness and unfulfilled economic expectation, yes, but not to high poverty.

While economic growth in Iran’s petro-economy may not favor the poor, its populist governments do.  Rouhani rightly put his faith in economic growth rather than redistribution as the way forward for the long term, as economic logic tells us.  But the same logic also teaches that cash transfers are far superior to energy subsidies.  For whatever reason, perhaps a visceral reaction to Ahmadinejad’s policies (much as with Trump and his predecessor’s legacy), Rouhani’s economic team appears to have made the wrong decision on cash transfers.  Having killed the program, they find themselves without an important instrument for energy price reform.  The parliament has announced its opposition to any energy price.  Till when they did not say, but I am pessimistic that any time soon Iran can match the new gasoline price in Saudi Arabia (about 15000 rials per liter), which is the price Rouhani had intended for gasoline for next year.