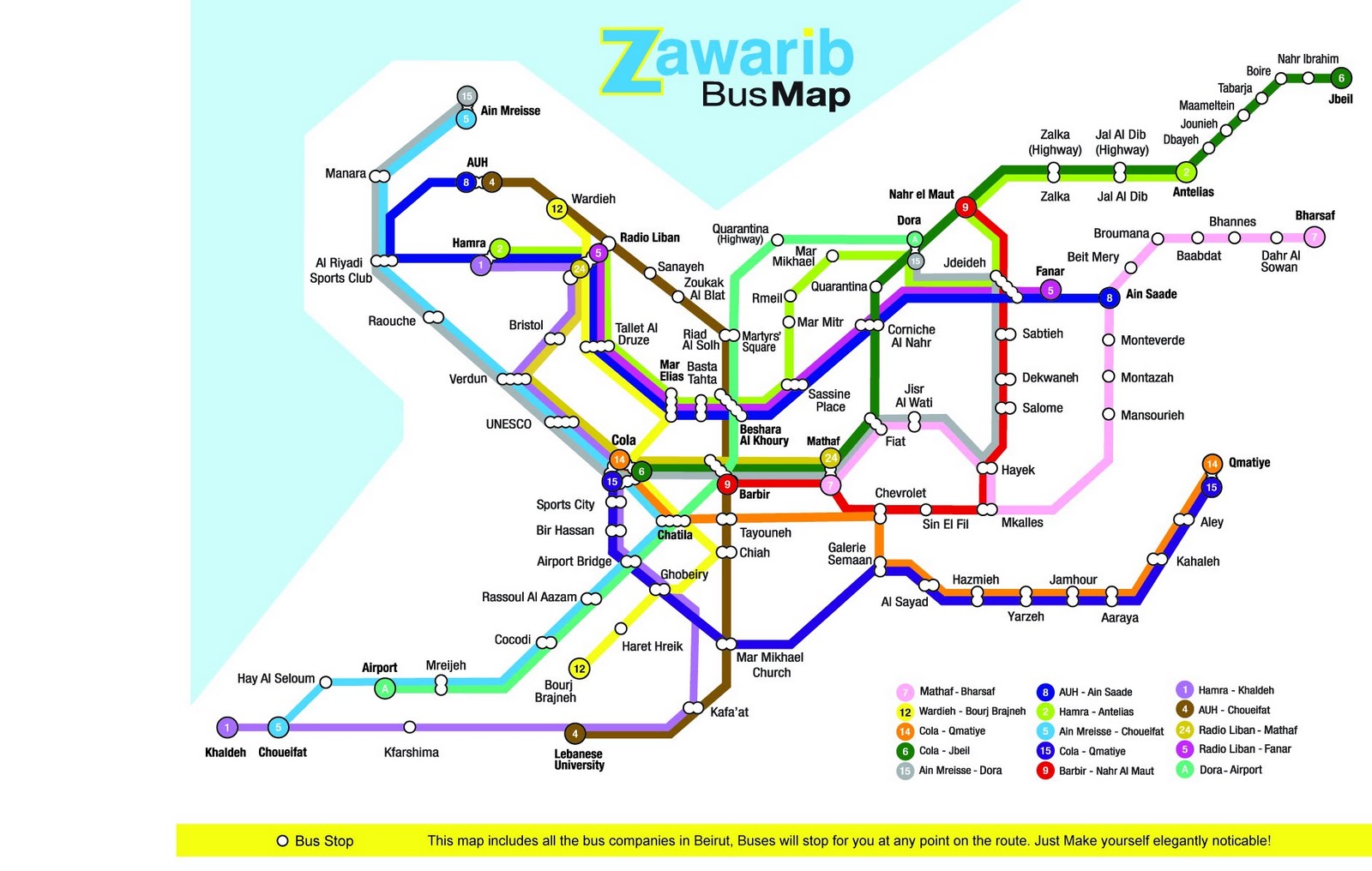 It’s no secret that traffic in Beirut is a nightmare. With very little access to and a lack of innovation and efficiency in public transportation, the Lebanese have increasingly opted to rely on their private vehicles to get around, which led to high congestion and skyrocketing pollution rates. According to a World Bank study published in 2017, 81% of Lebanese prefer using their own cars over vans (11%) and taxicabs (6%).

One group of young student entrepreneurs, however, aims to change these trends. With the imminent launch of Yalla Bus, this app may encourage public transportation use by offering bus times and routes to the average commuter.

Beirut Today sat down with one of Yalla Bus’ co-founders, AUB student Therese Kayrouz, to talk about her team’s effort from transforming a simple idea into a sustainable sollution.

Beirut Today [BT]: How did you have the idea of creating this application?

Thereze Kayrouz [TK]: We realized how much we needed to have good public transportation in Beirut when we got into university.

The problem started at AUB: the minimum parking fee is 7,000 LL a day [a little over $4.5], this is if we find a place to park our cars because believe it or not after 9am it is almost impossible to find a free parking spot. So, you have to give your car to the valet and this would cost you a minimum additional fee of 5,000 LL [$3]. Can everyone afford to pay on average 10,000 LL [almost $7] per day every day of the week? I’m not sure about this. And even if everyone can, isn’t tuition already high enough? Are we obliged to have so many additional fees?

The second big problem is traffic. It’s a major problem I think we all suffer from. One day, I created a survey that I shared with some friends on WhatsApp, just to see if someone would be interested to think about a solution to these problems and to know how people feel about Lebanese public transportation. Many responded and encouraged me to do something and others called me saying they had some ideas and that they’d like to work with me on a project to try and find a solution.

The initial team was composed of myself, Ghassan Zughaib, Georges Geha, Yara Nassar, Johnny el Hajj, Pia Saghbini and Raja Zughaib, all of whom are AUB students or alumni who have suffered from the exact same problems. We met many times and came up with the idea of developing an application.

BT: How did you go from having the idea to actually developing it?

TK: We participated in a competition called “Reimagine Lebanon,” organized by #LiveLoveBeirut and CME Offshore, a company that develops applications and softwares. The competition’s aim was to point out a problem in Lebanon and find an adequate solution. We won the first prize, which came with a cash prize of $10,000. This was a turning point for us, so we started developing the app. We decided that in order for it to be effective, it should aim to ameliorate not only the users’ experiences but also the drivers’.

BT: Can you explain what exactly the aim of this application is and how it works?

TK: For the users, the aim of the application is to give them the buses’ specific schedules, stops, and routes. So, if you want to go to Tripoli for example and you live around the Dora area, you enter your destination and your actual location (in this example, Dora), the application tells you which buses are available at what times and where to wait for them. People who do not have 3G can also have access to the information on the buses.

The stops are not “real stops” in the sense that they are still not constructed. Once the application is launched and working, a startup called H2 Eco Design & Contracting will work on them, as we have already made a deal with them.

As I mentioned earlier, this application helps the drivers’ experiences. Still, the drivers don’t have specific routes and stops that they take so a bus stops whenever someone waves on the road and asks to be picked up. This is the main source of inefficiency from the driver’s point of view. With this application, the drivers will be able to locate the users on a screen mounted on the bus.

BT: Have you started working on this application? And what is your role in the team?

TK: Yes, of course we did. The team and I started taking the bus a few months ago in order to practically see what were the problems and to know where our starting point would be.

My role in the team was to talk to the drivers and understand better the problem from their point of view. I met the bus owners and proposed the idea of us working with them and of course they loved it and were very excited about [this prospect] because they also needed to have better control on the whereabouts of their buses.

A few weeks after that, we installed GPS trackers in the buses of a specific line in order to gather data and have a clear idea of the routes, the times, the most popular stops, etc.

We are planning to follow the same protocol for all the bus lines and when this will be done, hopefully the app will be ready for use!

BT: How are you planning to make it work? Any specific marketing tool or support?

TK: Well first of all, Georges, Ghassan, Raja, Yara and myself are trying to spread the word as much as we can.

We are well aware that this is not enough on a national scale. This is why we have met with his excellency Youssef Fenianios, Minister of Public Works and Transportation, who gave us his full official support for the project (even for funds).

LiveLoveBeirut has played and will be playing the most important part in advertisement and marketing. Berytech offered us a free incubation space for a duration of 6 months after we won the “Femmes Francophones Entrepreneurs” competition.

Finally, we have received a lot of support from MaliaTec, the company that has provided us with all the tracking devices.

BT: It is quite unusual for a woman to take the bus as they tend to be more cautious because of the fear of sexual assaults or aggression. What would you say to Lebanese women specifically on the usage of public buses?

TK: I understand that these thoughts might cross women’s minds. The first time I had to take the bus, everyone was discouraging me to do it alone and, honestly, I was a little bit anxious.

But once I got there, I realized that we tend to make a bigger deal out of it much more than what it really is. We clearly have prejudices and the place of a woman in public transportation is exactly the same as her place in any public space. I’ve never been assaulted and never seen a woman being assaulted.

I am not saying that incidents are impossible but change has to happen at some point and it really is an “experience” like any other, like jogging in the morning alone, or walking to the supermarket on a late afternoon.

BT: How about the buses’ condition?

TK: The Lebanese buses are not modern and they have many flaws but they’re very acceptable. The seats are decent and there are some buses which installed air conditioners.

But if we revive this whole sector and a good number of people start using public transportation, I am sure that the bus owners and the users would pressure the government to help them renovate and fund this sector and maybe by then, our ministers and officials will start giving a greater attention to this issue.

Our goal is to facilitate the usage of public buses by getting every possible information on these buses and putting some order in the schedules. We cannot change the whole system like some people would have hoped or expected us to do. But anyway, I guess all big things start small.

Parts of this interview were edited for clarity and brevity.