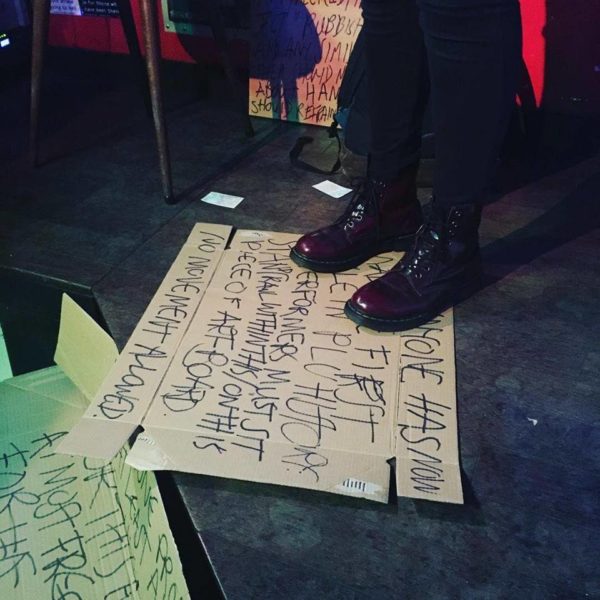 Sidewalk Beirut: Slow Down and Speak Up!

On Wednesday the 25th of October, Lebanon will witness the launch of Beirut’s first and only weekly Open Mic initiative! Sidewalk Beirut will take place every Wednesday, 8PM, at Riwaq Cafe in Geitawi where you will find the host of the evening with a notebook signing up performers for the night.

Over the past few years, Beirut was at the receiving end of a wide range of initiatives providing diverse spaces for artists, and now Sidewalk Beirut kicks in to offer a weekly dependable space for creativity and creation. The Open Mic, which will feature a different guest artist each week, is open to any and every kind of self-expression.

There are no limits or bounds to anyone who wants to perform. Be it comedy, poetry, prose, music, singing, dance, theatre sketches, any form of self-expression is welcomed and encouraged in all its diversity. In its effort to open up the stage to all kinds of art, Sidewalk aims to also become a space for fertile collaborations, where artists can meet, inspire and find inspiration in one another. In its community-oriented vision, it aims to encourage experimentation and exploration, a place where people would feel safe to try out something new.

It is a sister-initiative of Paris Lit Up, a transnational literary organization that is based in Paris, France. Sidewalk hopes to offer to Beirut what PLU offers Paris: A consistent and supportive environment for all kinds of art and all types of artists. Apart from weekly Open Mic nights, PLU also offers writing workshops, publishes a yearly literary magazine and curates yearly tours both to expand and cross-pollinate with other literary organizations across Europe.

I am Maysan Nasser, the founder of Sidewalk Beirut. I have regularly attended Paris Lit Up during while in Paris. I’ve become a part of the PLU team and joined them on two literary tours, one through Italy in 2016 and the other through England in 2017. By the end of my time in Paris, I was invited to host a few of the Open Mic nights. I was inspired by the PLU experience to curate and recreate a similar organization in Beirut. Sidewalk aims to expand and grow to hopefully become an important cornerstone of Beirut’s cultural scene, it also aims to offer writing workshops, publish yearly magazines in the future and collaborate with other artistic organizations in the Middle East.

In a world of echo chambers and increasing alienation and separation, art becomes a fundamental tool for us to regain our sense of acceptance and to expand our own understanding of the world. There is a worldwide movement of artistic organizations that are bringing people together in a fear-dominated world, organizations that are mirroring our own interpretations of the world for us to reflect upon, organizations which amidst their efforts to create more space for self-expression are also promoting empathy and compassion.  Amidst the chaotic nature of Beirut, Sidewalk aims to provide a space for people to slow down and speak up, to listen and be heard.

Friends, passionate writers, activists, and readers: As of the 25th of October, Sidewalk Beirut will be expecting you on any given Wednesday. You can stroll over to Riwaq and find us there: ready to celebrate, ache, share, and create.