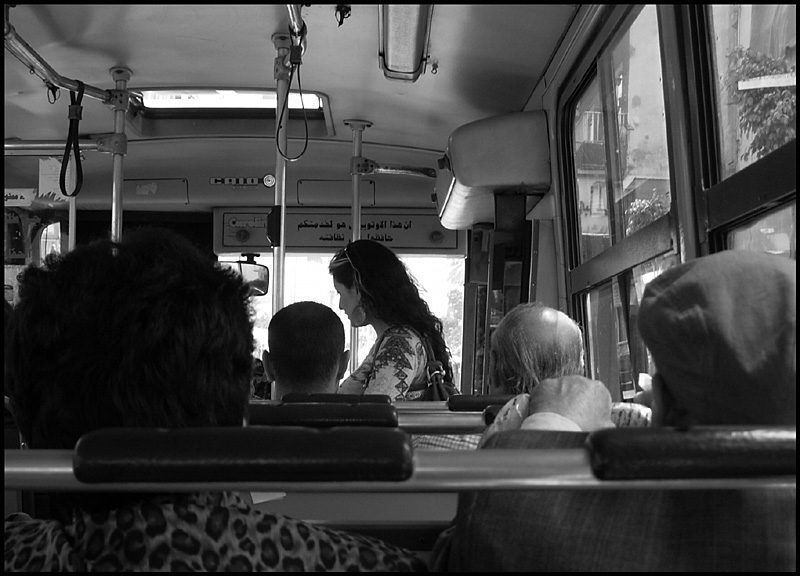 ‘7elo jismik, shu ismik’, ‘7abbaytik, wen baytik,’ ‘shu hal 7elo, fi minik 3a jello’ — these and other litanies of unwelcome praise are a daily part of women’s experience of public spaces in Lebanon. These micro-aggressions shape how women navigate the city, and must be taken into consideration when we plan for more sustainable transportation in Beirut. Indeed, fear of harassment is one of the most persistent stigmas attached to Lebanese public transport today, a fear that prevents many women from even considering riding a bus. Oscillating between exaggerated prejudice and sad reality, women’s experiences in Lebanese buses are a vital starting point for any discussion of power, social inclusion, and, more broadly, civic change in the public realm.

Away from all the hype associated with public transport in Beirut, I find myself surprised every day by the amount of consideration and effort made by bus drivers to protect women. Offering a young woman the front seat so that she can sit apart from male passengers is a common practice. Moreover, passengers usually go out of their way to make sure my experience in a bus is as safe as possible, going as far as standing up to give me their seat so that I can sit comfortably, away from any ‘man-spreader.’ Many have also helped defend me when harassed or made to feel insecure.

It is, however, regrettable that all these positive efforts fit into the same category: this kindness and consideration still frames me, the woman on the bus, as an object to be protected. It would be much better if these everyday acts extended towards educating and challenging the men who put me in these situations in the first place.

Once, a man was bothering me, and some other male passengers immediately stood up to give me their seat, yet none of them bothered to call out the harasser. Though welcome, these short-term actions remain reactive rather than preventive. Helping out targeted people in the heat of the moment is always a good thing, but the way the culture shapes these male responses means that they are not a subversion of the patriarchal and misogynist system, but somehow still deeply embedded in it. Their “chivalrous” reaction takes harassment as a given or natural occurrence, to be counterbalanced by other men, while women stand-by passively and gratefully.

Another problematic aspect of these paradoxical reactions is the inherent racist and classist selectivity of their attention: Black or Syrian women are always less likely to be defended or cared for than Lebanese women, making migrant women much more vulnerable to harassment. This brings up the need for more intersectional and inclusive discussions of public transport as a microcosm of our society at large.

Is this problem inherent to the bus as a space of intimate encounters, or is it an extension of the cross-cultural hostility to women’s autonomy more broadly? Taken from this intersectional and holistic view, one concludes that harassment in buses is less a problem of safety in public transportation, and more reflective of a life-constraining reality of being a woman in any public space under patriarchy.

Fears should not be disregarded, but they do need to be put in perspective: the feeling of being marginalized, illegitimate or insecure is no more acute on the bus than it is in any other urban space. In my view, we cannot make the spaces of public transport safer and more inclusive for women without questioning the pervasive patriarchal and misogynist reality they are embedded in — one aspect of wider constellation of matters of concern: gender rights, bodily autonomy, racism, class and intersectional solidarity.

And this fight can’t happen when women avoid the bus. As women, we need to normalize our presence in this vital urban space, and we need to shift the terms of debate from fears over our safety to a shared commitment to our right to the city. What is at stake on the bus fits into a bigger picture: rooting the transport conversation in feminist and anti-racist solidarity. Concern for safety, dignity and equality for all will mean a more effective ability to reclaim Beirut’s future.

With editorial work and additional input by Jad Baaklini.

Mira Tfaily is a PhD student and researcher working on informal mobilities in Lebanon. Based in Paris, she holds graduate degrees from Sciences Po Paris and EHESS. Her PhD research focuses on denial of reality in Beirut and informal mobilities; her empirical work being centered on the network of buses of Beirut. Her theoretical background is completed on the field by her work for The Bus Map Project, a Lebanese grassroots initiative that maps and promotes the informal system of buses of Lebanon that is discarded by the mainstream discourses on the city. In parallel to her research and her interest in urban ethnography, she has contributed to several media outlets as a cultural journalist.