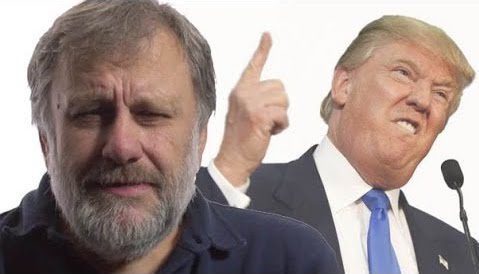 On Political Correctness: Why Making Fun of Trump Is Not Enough

Disclaimer: This article is in no way justifying or supporting any of President Donald J. Trump’s actions and practices.

A variety of talk show hosts, political commentators, and comedy skits on shows like Saturday Night Live have seemingly made it a point to devote at least a couple of minutes of airtime to discuss Donald Trump’s latest outburst or the latest incident in the white house or at a diplomatic affair. Mostly, Donald Trump is criticized through a lens of often-pretentious political correctness. But what exactly is political correctness?

Any proper fan of Slavoj Žižek that has frequently been tuning in to his most recent lectures would know of his rants about “political correctness”, in his signature slurred and sniffy manner of speech. For those who are unfamiliar with his work, Slavoj Žižek is a Slovenian-born, Marxist-Lacanian-Hegelian philosopher whose work has been a source of great debate and outrage.

He argues that in similarity to the way in which political correctness can be used a way to shield society from certain terms. This leads to ambiguity because some things would not be called by what they really are and would be given a more socially acceptable term, and thus distracts away from the actual issue. The most explicit example of this is when US army decided to shift their language when it came to their practice of torture in Abu Ghraib, where instead of using the term torture, they used the term “advanced interrogation techniques”.

Žižek alleges that this removes the violence from the actual act, and thus normalizes the practice. He further humorously predicts that in the coming years, rape may even be called “advanced seduction techniques”.In addition, he analyses that right-wing fanatics may use political correctness to claim that the liberal community marginalizes them when they are labeled as racist neo-Nazis. This thus is completely contradictory and blurs the lines between what is or is not offensive.

When it comes to Trump however, it is of an entirely different breed of political correctness. Trump is a “vulgar opportunist” and has repeatedly succeeded at shocking the United States of America and the world with his racist and misogynist statements and his infantile Tweets. One can never forget his offensive imitation of Senator John McCain’s disabilities, his insults against the father of a deceased Iranian-born war hero, and his infamous statement about women that was caught on camera.

Each time that Donald Trump had stated something irreconcilably belligerent, American democratic liberals thought that his political career was over. Liberals also have never missed an opportunity to paint him as an orange-colored creature, with hair that looks like road-kill that goes around spouting racist obscenities. Political commentator John Oliver once called him a “spray-tanned Furby” and one cannot forget Alec Baldwin’s portrayal of Trump on the popular Saturday Night Live. In his vulgarity, Trump has nevertheless managed to garner a significant amount of support, ranging from moral neo-conservatives to right-wing neo-Nazi fanatics and has successfully mobilized the “the darkest white supremacist circles”. Whenever a Trump supporter would be interviewed, they would claim that they voted for him because “he tells it like it is”. This contrasts with democratic liberal’s language that is far too ambiguous to comprehend.

However, it is far more complex than that. Žižek’s scrutiny of American liberals’ attempts at “diabolizing” Trump and his inappropriate comments and their constant belittling of the “uneducated, white trash” communities through their political correctness indicates that this completely ignores the reality of economic inequality at hand.

By promoting political correctness, liberals literally ignore the policies that have created and recreated the “white trash” working social class that voted and consistently supports Trump. Liberals do not look below the surface to find the clear economic disparity that unceasingly plagues the United Sates. Political correctness does nothing but feed the ego of the pretentious pseudo-liberal left in the US. Furthermore, the more liberal comedians and intellectuals poke fun and humiliate the “uneducated” right wing fanatics, the more disgruntled the working class becomes with the liberal elite and further aggravates their frustrations towards the establishment as a whole.

Thus, the reality is that the Democratic Party establishment has failed at providing basic needs such as healthcare, education, infrastructure, sustainable jobs etc. This has produced an exasperated, disproportionately underprivileged working class whose living conditions continue to deteriorate with or without Trump’s policies. In addition, liberal political correctness overlooks the neo-liberal tax breaks given to corporate conglomerates and further neglects the fact that the working class in the US is paying the price.

When words fail them, American liberals traditionally label Trump as a “xenophobic proto-fascist”. Žižek claims that Trump was and is the anti-establishment candidate and that this is precisely the source of his appeal. Trump challenged Hillary Clinton, the symbol of the establishment and spoke in a language that was clear and simple, rather with loaded ambiguous political jargon. Trump’s hate speeches not only cater to and resonate with the frustrations of the working class in the US, but also contribute to the facilitation of realities of the US to rise above the surface.

Unfortunately, American liberals are still stuck at a perpetual state of disbelief at Trump’s election as President of the United States, his appalling actions following his election, and the “rise of public obscenity”. This comes at the expense of failing to recognize and reflect on the historical narrative that has lead to this moment and to then understand how to prevent another catastrophe like Trump from ever happening.

Perhaps, the inadequacy and failure of the establishment is a yet another sign of the late stages of capitalism and may even be an opportunity for a new “authentic left to emerge” in the United States. Only time will tell.