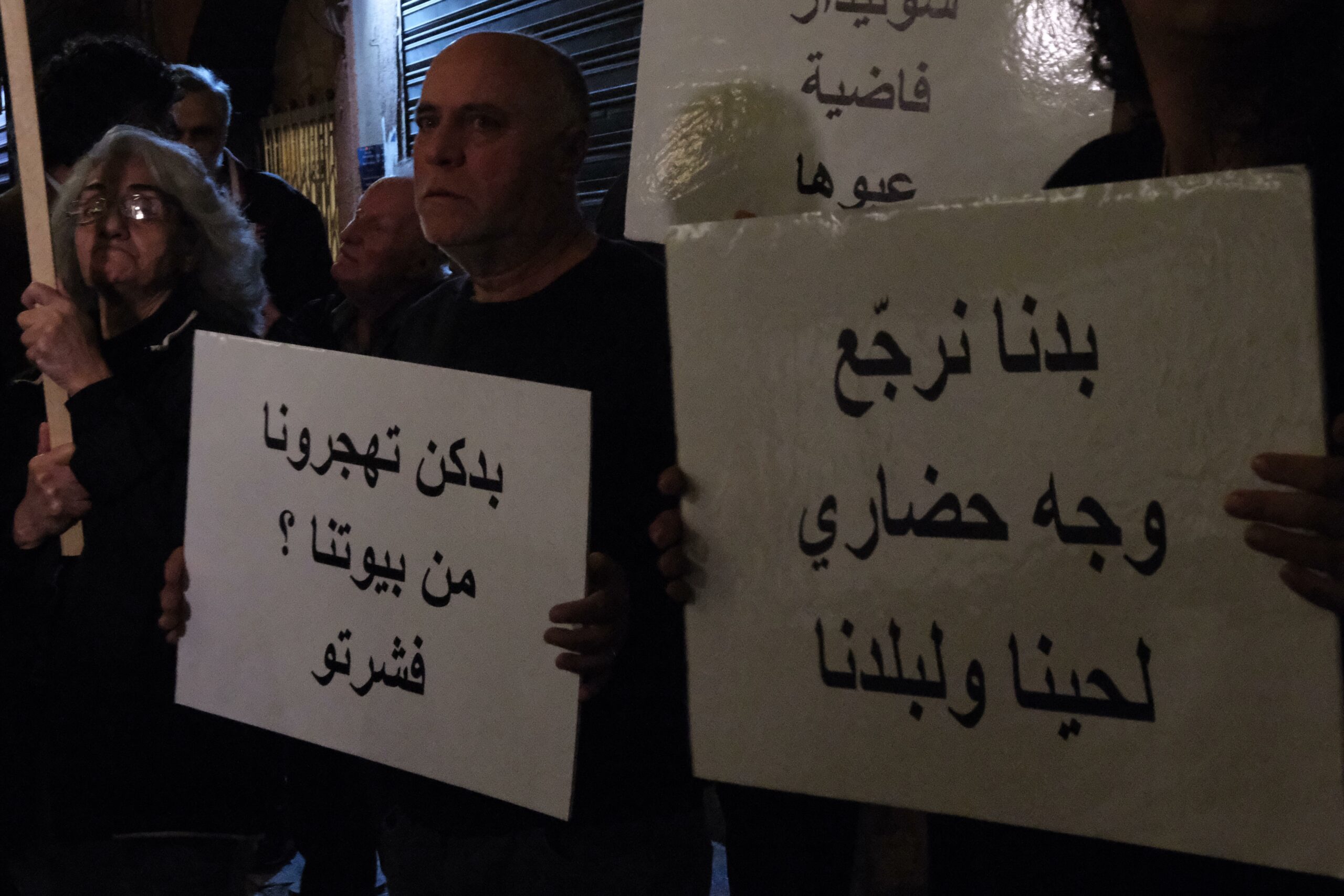 Residents Continue Their Fight Against The Takeover Of Their Neighbourhood

In June 2022, residents of Mar Mkhayel and Gemmayze began organized action against what they describe as unlawful acts by local pubs, valet parking corporations, and crooked realtors. Their first direct action scheme was setting up a banner over a local pub, which says “Residential area, your noise is a killer.” After 6 months of “diplomatic action,” residents took to the streets; this time with heavy local participation, better organizing, and clear demands.

“I have a personal story to tell. While walking on a sidewalk in Mar Mkhayel, I came across a coffee shop which had taken over the street, a common occurrence,” said Pierre, one of the organizers of the march and a lifelong resident of Gemayze. “I asked a customer who was sitting on the sidewalk to let me pass. Even though I was polite in my request, I was attacked. The customer pushed me with both hands. I fell and broke my arm and had to undergo surgery. The medical bill cost me 2,500$.”

In addition to the physiological harm faced by neighbors, loud noises caused by car exhausts and subwoofers take a toll on the resident’s mental health as they bring back memories of the port explosion which struck the city of Beirut only two years ago.

“This area [Mar Mkhayel, Karantina, Gemmayze] suffered greatly due to the August 4th explosion, and yet people still come here to party,” Pierre told Beirut Today. “If you want to party, either respect the residents, or go somewhere else. It is insensitive to act as if this area isn’t still suffering.”

At first glance one might believe that this is a simple issue about loud music and intoxicated individuals running amuck in a populated neighborhood. However, some locals believe that it is in fact a struggle between the economic interests of rich businessmen and public officials on one hand, and those of the residents on the other.

The livelihoods of residents and local businesses of Gemmayze and Mar Mkhayel are also affected by the presence of restaurants and pubs in their neighborhood. Locals claim that they are obliged to pay for extra hours of energy provided by local genitors as pubs demand more hours of electricity to accommodate their customers who stay until late hours. Small time manufacturers, garage owners, and artisans also suffer economic losses as they are forced to halt work as early as 4pm, due to the streets being overtaken by valet parking corporations.

Locals also shed light on the steep decline of prices of real estate in these areas.

“The prices of apartments are becoming cheaper. I believe that this is a part of a larger tactic to evict the residents and turn this area into something else,” explains Emily.

Emily explains that she and other residents have tried diplomatic means to resolve the issues their neighborhood faces. However, these means were not fruitful. Only simple measures were taken even though residents were in contact with officials for as long as one year.

A week before the 2022 parliamentary elections, local officials did indeed take measures to resolve the issue, but they were rather short lived. At the time the police shut down 6 pubs and sealed them with red wax. Their cases we referred to public prosecution, yet they managed to re-open only a few days later.

Members of parliament Nicolas Sehnaoui and Ghassan Hasbani, who ran in the Beirut district in 2022, also participated in the march at the behest of the residents. At first this represented a stark contradiction, considering the lack of response from the officials’ side. However, the organizers explained that the two MPs were only invited in order to attract media attention.

“There is a contradiction between the MP’s economic interest and those of the residents. Some of them may have shares in some pubs or restaurants. My only hope is that this movement pressures officials of the area to implement our demands,” explained Pierre.

“I live in Gemmayze, I was born here. I’ve spent my entire life here. I have even lived during the civil war in this area. I lived through the 4th of August explosion. And I will continue to stay here,” said Emily.