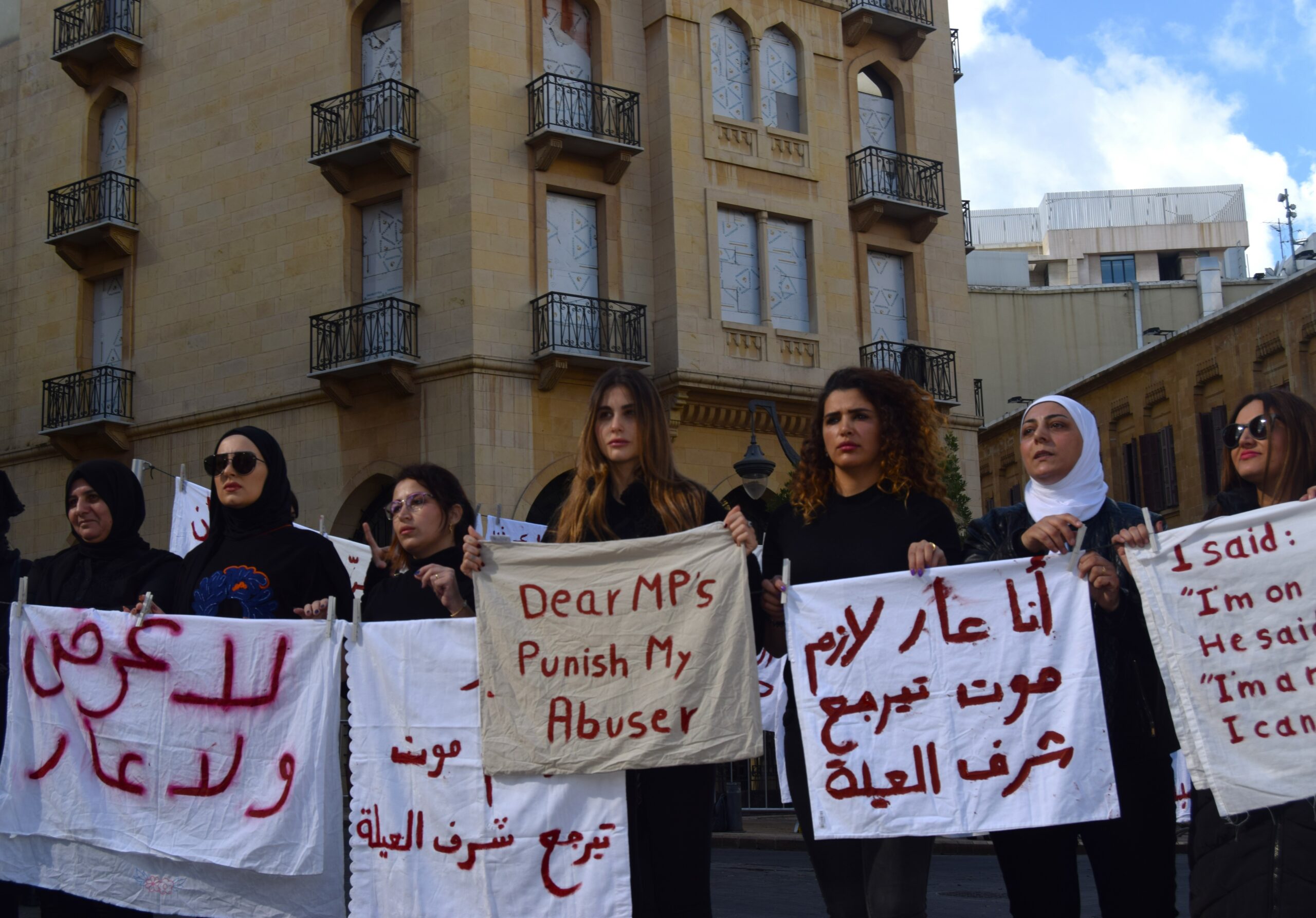 December 27th, 11 am, tens of Lebanese women congregate in front of the parliament for ABAAD’s anti-sexual harassment campaign, their chanting voices reverberating in unison across Al Nejmeh square. Some kneel on the floor, painting bright red protest slogans on fresh white linen that read: I’m free, not your property.

Founded in 2011, ABAAD is a civil, non-sectarian non-profit organization seeking to promote social and economic development in the MENA region based on principles of gender equality and justice. It empowers women through direct protection services, policy development, legal reform, and transmedia advocacy.

Launched by ABAAD as part of the 16 International Days of Activism campaign to end Violence Against Women and Girls, #NoShameNoBlame is a national campaign that seeks to amend Lebanese laws around sexual assault crimes for increased penal sentences thereof.

Prior to the campaign, the organization conducted a national survey showing that for every ten women sexually assaulted in Lebanon, six did not report the crime due to considerations relating to dignity and honor.

The survey also reports that while 75% of women considered sexual assault a primarily physical and psychological assault on women, 71% stated that society considers it an attack on the family’s honor.

“I was raped and discovered my pregnancy five months after the crime. My family forbade me to report the perpetrator because they feared what people would say, and my brother threatened to kill me,” shared one anonymous survivor with ABAAD.

All vested in black, the women hang their linen slogans alongside victims’ confessions on four staggered clotheslines, symbolizing the act of airing out assaulters’ dirty laundry to the public. Huddled together, hand in hand, their chanting intensifies as they demand justice for survivors of all ages, sects, and walks of life across Lebanon.

At the helm of the protest is Ghida Anani, Director of ABAAD, who speaks passionately and eloquently about the organization’s work. She shared that the #NoShameNoBlame campaign is a cumulative process of amending the legislation, raising awareness of the pervasiveness of sexual assault in Lebanon, and addressing the social structures normalizing it.

On the legislative level, ABAAD’s proposed bill demands referring to sexual assault crimes as such rather than the currently used terminology “crime against honor.” Additionally, it calls for courts to prosecute rapists and sexual harassers promptly and to the fullest extent of the law.

When asked about her message to the parliamentarians she seeks to endorse the bill, Ghida tells Beirut Today that she has “nothing but faith that they will accelerate studying and supporting the proposed law as soon as possible.”

“We’ve had over forty women reach out to us in less than 24 hours since the campaign’s launch to share their stories and seek proper help. When survivors feel supported, they speak up,” says Anani.

Standing in solidarity is model and global brand ambassador Nour Arida, who flew in from Paris specifically to join the protest. The 33-year-old has amassed over 10 million followers on her Instagram platform, which she now uses to amplify survivor voices and demand justice.

Nour joined forces with ABAAD a year ago on a social media campaign where she recounted women’s sexual assault and rape cases, which instantly went viral. She recalls receiving over 15 000 messages from survivors sharing their stories as a defining moment that inspired her to keep active in the gender advocacy space.

“I work on big projects and am an ambassador for major brands. But the most important part of my job is to use my platform and voice for good,” shared Arida with Beirut Today.

Nour speaks confidently of her latest collaboration with the organization: a series of episodes shot with sexual harassment survivors, scheduled to premiere online. She believes that although changing the patriarchal culture that normalizes sexual assault in Lebanon cannot occur overnight, it is inevitable once survivors speak up.

“Do not be scared to raise your voice. I know I cannot fully comprehend what you’re going through and had I been in your circumstances, I would also feel intimidated. But you’re not alone, I stand with you, and ABAAD stands with you,” Nour tells Beirut Today, confidently addressing the survivors.

In a final collective action, amid the flashing cameras, Ghida, Nour, and the protesting women raise their black umbrellas to mourn the lost survivors of sexual assault, taking a moment of silence to meditate on their courage.