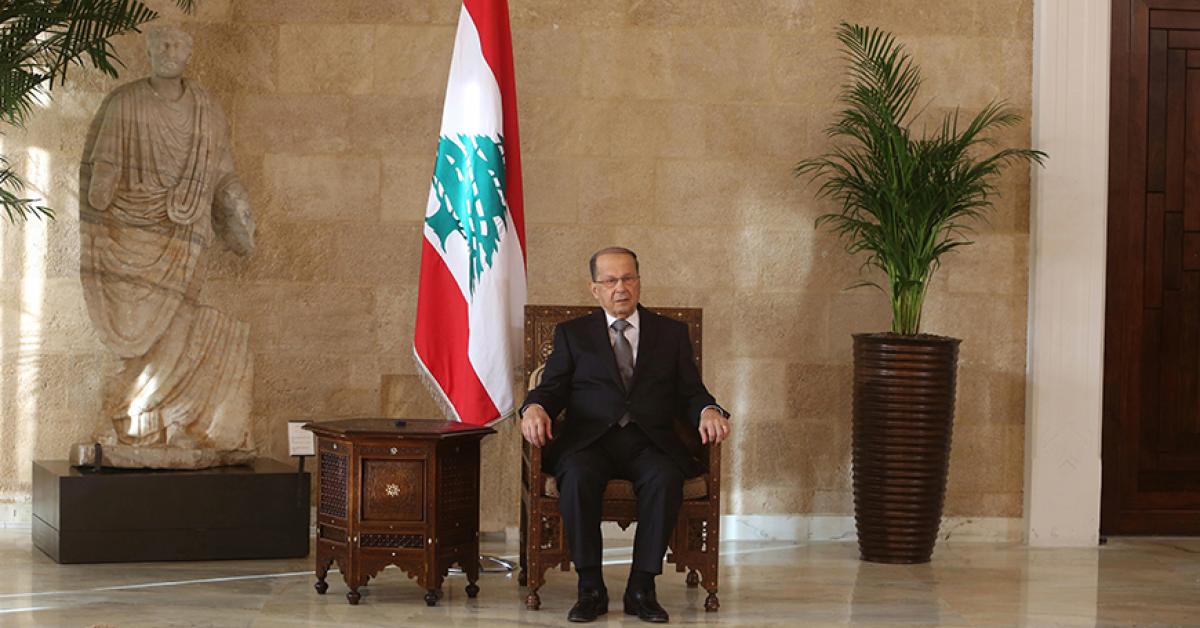 Six years after the launch of the “strong regime” against freedoms, Lebanon closes the curtains of the era of collapse and vacuums. During this era, the country got close to being classified as a tyrannical and police state, as described by a report by the SKEYES Center for Media and Cultural Freedom – an essential research branch of the Samir Kassir Foundation.

Ever since General Michel Aoun assumed the role of president on October 31, 2016, Lebanon witnessed “a serious decline in freedom of expression and has approached the classification of authoritarian and police states, especially after the escalation of repressive practices,” says the report.

Over 801 violations against media and cultural freedoms were recorded during Aoun’s six years as president.

The report, prepared by Widad Jarbouh, highlights the most prominent violations against journalists, activists, and even citizens who were summoned, detained, and interrogated for tweets, publications or news shared on social media networks, news sites and media organizations. The charges include insulting the President of the Republic or the presidency, and defaming the president.

This forms a striking contrast when compared to the retaliatory actions committed by the public in response to these actions, which include storming media channel headquarters, initiating bullying and misinformation campaigns, as well as physical assaults on reporters and photographers in response.

These practices are not exclusive to Aoun supporters, as they are practiced by partisans of most ruling parties in Lebanon.

“The report came with the context of the political conditions the country has gone through, and it clarifies the methodology adopted by the repressive regime during the era of former President Michel Aoun,” said Jad Shahrour, communications officer at SKEYES.

“This regime used most of its security apparatus to commit violations, either directly or indirectly, especially with summons through public prosecutors, illegal investigations, or detention for a long period that violates the Penal Code.”

“It is during Aoun’s era that writer Loqman Slim was assassinated, and the phenomenon of impunity was brought back,” added Shahrour.

“Lebanon has witnessed several assassinations, notably related to journalists from the 1970s up until this day, in the absence of any serious investigation or judicial process that would reveal the perpetrators.”

Journalists were severely beaten during Former President Aoun’s era, especially after the outbreak of the October 17 Revolution, according to Shahrour. He added that mechanisms of repression have developed since Aoun assumed presidency, with over 230 violations recorded in 2019 – the highest number for a single year.

During Aoun’s era, Lebanon recorded a shocking decline in the World Press Freedom Index issued by Reporters Without Borders. Lebanon, which was ranked 98th in 2016, ranked 130th out of 180 countries in 2022, down 32 places from the previous year.

Asaad Bishara, head of the Journalists for Freedom association, told Beirut Today that this decline makes sense, as he claims Aoun’s era was the era of targeting the press and free media par excellence.

“The Era [popular name given to Aoun’s mandate] incited the judiciary against media freedoms and implemented many arbitrary prosecutions of prominent media figures and media stations,” said Bishara.

“Aoun’s term in office witnessed the worst stage of assault on liberties,” he added. “For this reason, the decline in Lebanon’s classification is logical in relation to the arbitrary performance of the authorities. When corruption increases within the authority, it turns into a tyrannical authority to suppress dissenting voices and suppress media and public freedoms.”

Freedom is Stronger Than the Symbols of Tyranny

“Aoun’s era turned Lebanon into a police state,” said Bishara, claiming that Lebanon is one of the countries that violate media and public freedoms the most. “Therefore, it is necessary for the media body to be allied with civil society. The battle for freedom is a constant battle because a free voice is the greatest threat to the regime’s tyranny.”

Bishara insists that these pressures will not stop Lebanon from remaining resilient and opposed to police state practices.

“Lebanon is a country that loves freedom,” he said.