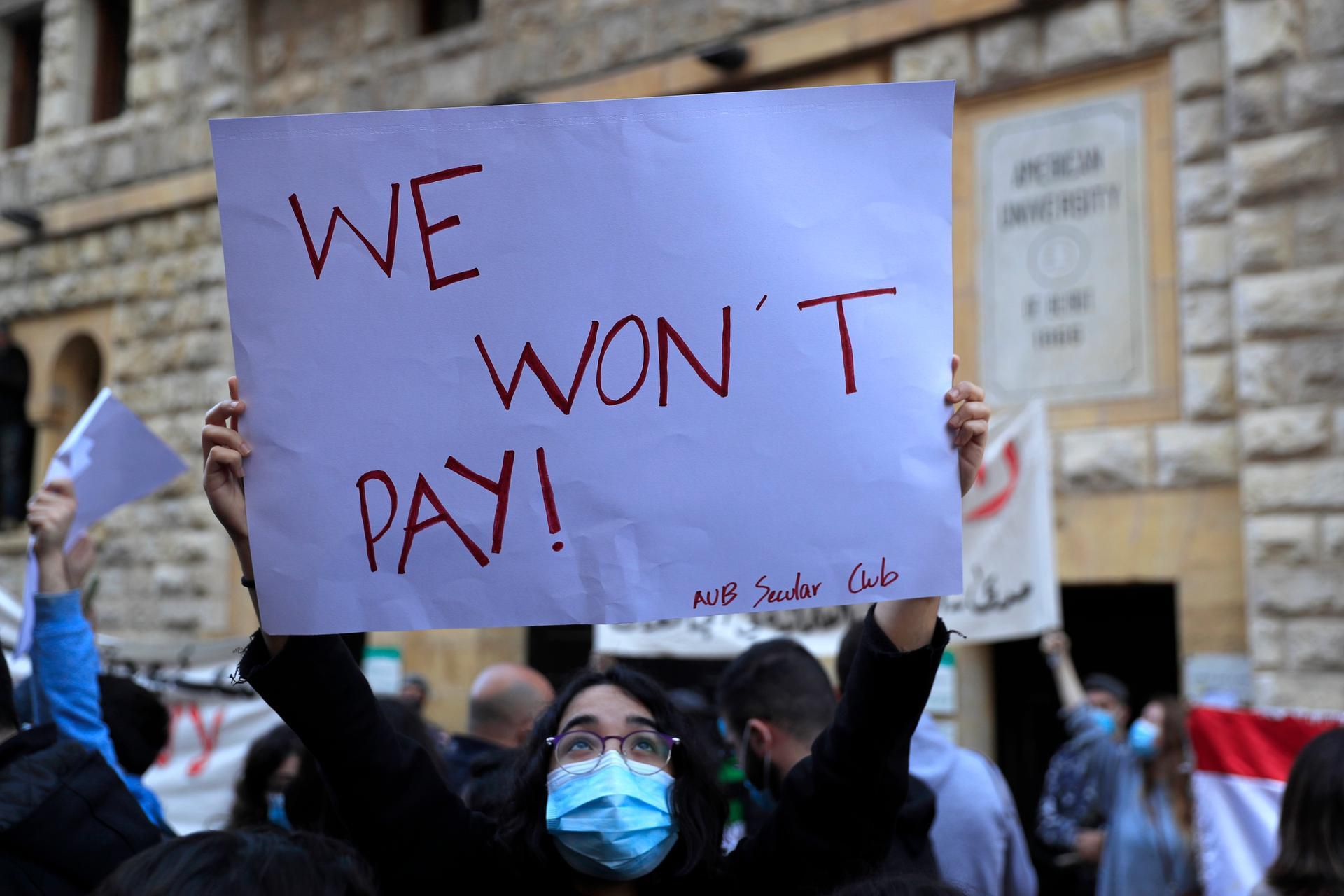 Since the summer of 2019, Lebanon has witnessed an accelerating economic collapse – the worst in the country’s history – exacerbated by the horrific explosion of the Port of Beirut on August 4 and the Coronavirus pandemicThe economic collapse affected all the productive sectors in Lebanon, including the educational sector – a sector Lebanon had prided itself for all these years.

After the decline of public education as a result of the pandemic and the shift to online education for the past few years, in addition to the failure to resume the current academic year after the wave of strikes by teachers, most Lebanese people chose to forgo public education in favour of private education.

Due to the pandemic, online classes  and the several teachers’ strikes in both private and public universities, education in Lebanon has witnessed a decline in the past few years. Now, after almost two years of the crisis, some private and public schools and universities have chosen to fully or partially dollarize the tuition.

As a result, parents have been overwhelmed with high tuition rates, while only wanting their children to receive a decent education and create a future for themselves. So how have recent events reflected on the lives of students and those surrounding them?

High tuition fees were set by private schools for the next academic year 2022/2023 without consulting parents’ committees or the Ministry of Education and the Public Education Department.

Schools also imposed extra payments in dollars – on top of tuition fees – as a condition for registration, which puts the right to education at stake in light of the fragility of formal education and its inability to absorb displaced students from the public schools. Unfortunately, this acts as a warning sign for a possible increase in high school dropout rates.

The 2021-2022 school year was difficult for parents, teachers, and schools. Today, schools reveal, with excessive frankness, exorbitant rates for the next year’s installments.

Tuition fees have somewhat doubled in comparison to previous years due to these extra fees. Tuitions now include a specific fee for electricity, fuel for buses, as well as stationary including chalk, papers, planners and booklets.

Most of these schools have even imposed “fresh” fees starting at $200 and up to $4,000. An additional seven million to 32 million L.L. are demanded in the local currency.

An example of a school in struggle is one located just by the airport. The school now demands $1,000 in fresh dollars, and more than 30 million L.L. for one academic year per child.

The school administration is putting pressure on the parents, as it “imposes paying a large number in dollars at the beginning of the year to reserve a seat for its students, so it counts who will stay and who will leave.”

“The fear is that the number of teachers will exceed the number of students and they will have to dismiss them,” says Ramy W., the head of the Parents Committee at an unnamed school.

The Parents Committee negotiated with the administration because they want to negotiate and compromise for the sake of the school and the students.

They did not resort to the option of filing a complaint with the ministry or filing a lawsuit because according to W. this path “did not lead to a result, but rather generated a tension between the school and the parents, of which the students were victims.”

At another school, L.R, an English teacher and mother of two children, describes the fees as “frightening,” and regrets the inability of some parents to withstand them. She finds “the greatest fear for the school is to stay at the same level of professionalism and preserve its teachers.”

Although parents are struggling to pay their children’s tuition fees, heads of private schools are also working hard to maintain the best education for their students.

“We all know what the people are suffering, but we are also suffering,” M.S., a private school principal, told Beirut Today.

“We also have families, and these organizations are to feed our families. And the business I’ve been working for more than ten years, and I have to make sure that I can sustain my work.”

“I have a reputation, people who trust me with their children’s future, and teachers who survive because of this work. To attain all these things, I should also increase my income; thus, I preserve my school,” he added.

If we put aside the category of affluent parents who are not affected by tuition fee increases, it cannot be neglected that public and private sector employees constitute the overwhelming majority of parents. Those with medium or low salaries will look for schools that require lower tuition fees.

This means that after parents choose to move their children to nearby schools to save on the cost of the transportation, schools will begin to filter students according to their ability to pay next year, which makes schools confused when determining the installments.

This puts the futures of many at risk, as parents are also at the mercy of their employers – many of whom are refusing to pay full employees their pre-crisis salaries in full.

Public schools: towards the abyss

As it currently stands, public school tuition fees – set by the state – are equivalent to one and a half times the minimum wage. However, the crisis and the failure of the state to pay its dues five years ago turned them into disaster schools.

The conditions of their teachers became dismal, except for those with connections to religious associations or prominent political parties.

The power of the government over public schools is tainted by a lot of intertwined interests. This made a large number of schools benefit from public funds in exchange for poor quality education, as well as corruption and fraud in the numbers of beneficiaries.

According to local news outlets, this has also affected the only state university in Lebanon, the Lebanese University. To much surprise, a few of the university’s faculties have started asking for a certain amount of the tuition to be paid in dollars.

Universities both private and public have explained that this change in the tuition fees has been made due to the fact that most amenities such as electricity and fuel oil are currently being paid fully in dollars by the university and thus the students need to bear some of the weight.

Other universities believed that in order for quality education to continue in Lebanon, instructors and faculty need to be paid higher salaries in an attempt to match salaries from abroad.

Salaries are not enough

Noura, a senior business student, stated that even with the financial aid and scholarship, she may still not be able to pay the fully dollarized tuition.

“My parents’ salaries are still in Lebanese Lira, similar to most people. With this exchange rate, it is obviously impossible to pay a tuition in dollars and uphold a household as well,” she said.

“Transportation fees and dorms have increased greatly and has made going to university even harder.”

A ticket to a better future

Other students have expressed the dire need of education in Lebanon to be able to get out of the crisis, but these high tuition rates are making it harder.

Judy, a student at the Lebanese American University, said, “my tuition is almost $20,000 per year. No one working in Lebanon has a salary enough to pay such a high tuition. If it was not for the financial aid, I would have had to drop out”.

She also explains that this does not only jeopardize the Lebanese education sector, but the country as a whole. Students are having to drop out now more than ever before.

“Even though the Lebanese University is among the top 5 universities in Lebanon, transfering there is completely out of the picture for me. Strikes are taking place all year long and students are suffering to even complete one whole educational year,” Noura said.

Education in Lebanon is under immense threat, especially during the next few years. Between the dollarization of tuition and the ongoing teacher strikes, what does the future hold for this generation and their education?