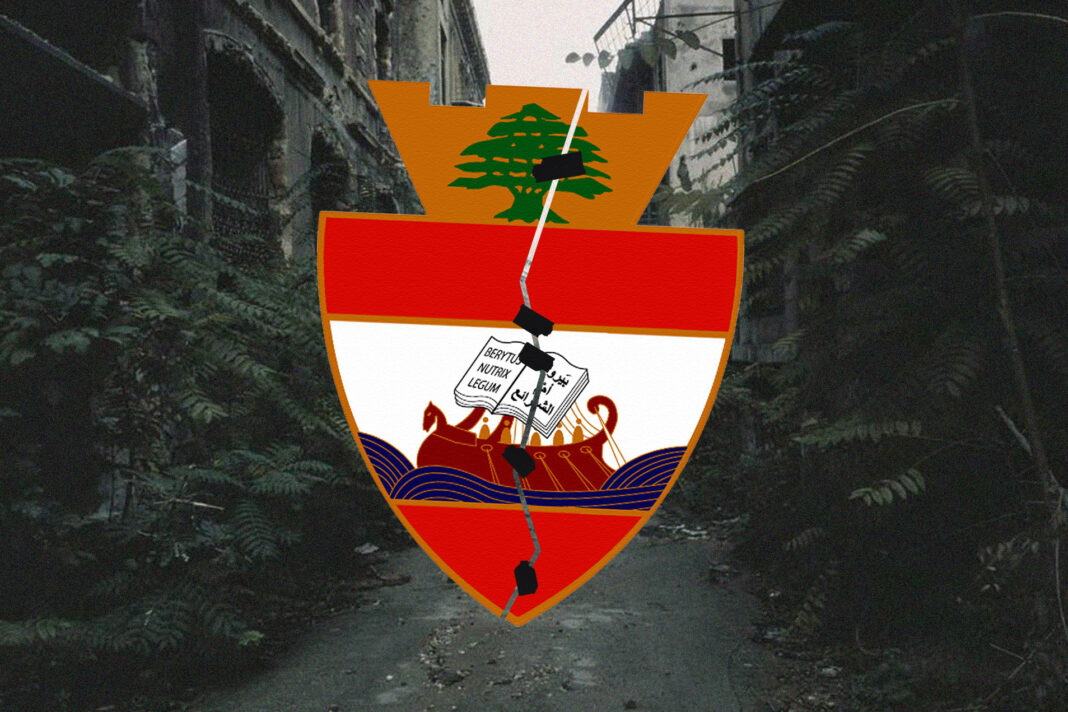 Earlier last week, Members of Parliament proposed a law to divide the Beirut Municipality into Eastern and Western parts.

The proposal was pitched by the Free Patriotic Movement’s Beirut MPs Edgar Traboulsi and Nicolas Sehnaoui, as well as Aley MP Cesar Abi Khalil. It also saw the support of members from the Lebanese Forces, including MP Ghassan Hasbani.

It has been thoroughly criticized on social media, reminding residents of the Green Line drawn between East and West Beirut during the 1975-1990 Civil War—especially since the demarcation is heavily based on sectarian lines.

The proposal would see the Eastern part of the municipality comprise the areas of Ashrafieh, Rmeil, Mdawar, Marfaa, and Saifi, while the Western part would cover the areas of Mazra’a, Msaytbeh, Ras Beirut, Ain el Mreisseh, Zuqaq al Blat and Mina el Hosn.

The MPs supporting the proposal denied it having a sectarian element, maintaining that having smaller municipalities allows for better governance and accountability. However, how feasible is the proposal in reality and what are its social, political, urban and psychological implications?

From an urban and governance perspective

An analysis of administrative and governance-related processes is essential to get a grasp of the applicability of the proposal—and similar proposals that suggest dividing the city into even more than 2 parts, such as 12.

“The tragedy is that Beirut is already poorly served because it is governed as a small territory when in practice it is a capital city and its territory can only be serviced appropriately at the right scale,” said Mona Fawaz, Professor of Urban Studies & Planning at the American University of Beirut.

“If 70 percent of your cars, for example, are coming from the areas outside the territory, you cannot address the traffic jams within the smaller territory,” she told Beirut Today. “Sewers, similarly, need to follow topography and cannot be managed within the municipal current area. Instead of creating inclusive metropolitan frameworks, the parties are now fragmenting the city further, making it unserviceable and unlivable for city dwellers.”

Additionally, the selection of regions comprising both sides of the city rests on no logical urban or administrative basis other than the geographical delineation of the Civil War’s Green Line.

The proposed demarcation itself is not fully clear on the map as well, a crucial matter when it comes to matters such as the collection of municipal taxes and which resident pays where.

“The proposal itself is not realistic and those who concocted know it’s not something that can realistically pass through,” said economist Ali Noureddine.

“The proposal mentions that both councils of the city get together with the mayor of Beirut to decide on matters, and in case there’s an unresolved issue the Minister of Interior intervenes… It’s truly something resembling the days of the Mutasarriffiya, a caricature-like proposal.”

In practice, municipality councils should have their own scope of autonomy and independence in decision-making. What this proposal is suggesting however hinders exactly the councils’ very autonomy, powers and independence and the attempts of smooth governance by complicating the governability tenfold.

Arriving at a unified stance regarding the planning and the administration of the larger city would therefore now include consensus between two parties, as well as the intervention of a third and fourth party, a complication which could all be avoided within one municipal council.

“In Beirut specifically, corruption is a politically centralized behavior that spreads across an entire country and is the work of the corrupted ruling class and not a matter of geography,” Rana Khoury, one of the leaders of the 2016 Beirut Madinati municipal elections campaign, told Beirut Today.

She highlighted the sectarian component to the “solving corruption” argument, which hints that certain communities—particularly those residing in West Beirut— have a higher propensity to engage in corruption schemes.

Khoury added that it is “worth mentioning that the party who suggested splitting Beirut into two is part of the municipal council and has zero achievement […] within the municipality.”

“It’s a party with a long history of sectarianism, racism, sexism, corruption, oppression, and ‘blaming others’ (ما خلّونا / They didn’t let us),” she said.

The importance of the upcoming municipality elections

With pro-change members of parliament leading the charge against classic political parties, the country remains in a state of paralysis following the parliamentary elections.

There exists an over-reliance on new MPs to bring forward change, which is why it is essential to highlight the complementarity of the different venues for political change. Parliamentary courses of action mostly include accountability and legislative steps, with a lack of executive power.

This has several consequences on the population’s confidence in pro-change groups and individuals, as it doesn’t always allow them to see visible, tangible steps—and thus the question of “what did the thawra achieve” remains difficult to answer.

Accordingly, ensuring that progressive pro-change campaigns maintain their high-ceiling discourse and score well on the upcoming municipal elections is a necessity.

The Beirut Municipality and other municipalities have power in solving crucial local issues and putting forward local ameliorations which regular citizens can notice directly, thus increasing their confidence that entrusting new people can actually make a difference.

Municipalities are not apolitical venues where endeavors to manage water or infrastructural matters are addressed by technocrats.

They are purely political grounds where the distribution of resources and the management of local affairs follow the council’s proclivity regarding what social groups it serves, and if it addresses social inequalities and issues central to democracy and social justice.