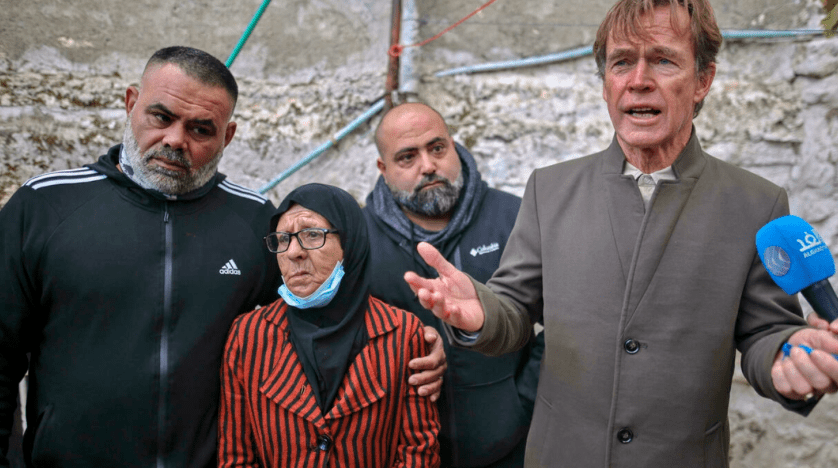 The Salems, a Palestinian family of 11 with four children, were scheduled to be forcibly evicted in March 2022 when Israeli courts approved settler property claims on the home they had lived in since 1951.

Days afterwards, Israeli occupation forces cut off and established checkpoints on all Sheikh Jarrah borders, dramatically restricting departure and entry into the East Jerusalem neighborhood. This led to an increase in the presence of Israeli “police,” which merely added to the violence and disorder through the use of tear gas, stun grenades, and rubber bullets against Palestinians.

This scene is one of many that Palestinian families have been facing in their occupied country. Yet despite the close proximity between Lebanon and Palestine, many Lebanese civilians lack knowledge of the horrors faced by their neighbors.

At a time when major Palestinian concerns are covered daily on other Arab and Pan-Arab media channels, the coverage remains questionable in a country that hosts around half a million Palestinian refugees and whose politics and economics are deeply affected by surrounding countries and foreign policies.

“Palestinian issues have long constituted a factor of differentiation and conflict among Lebanese people; and the repercussions of these two issues are quickly shown in the political and media discourse,” Maharat Foundation, a specialized organization that defends the freedom of opinion and expression, wrote in its 2015 report, Monitoring Racism in the Lebanese Media.

Media discourse can heavily affect public opinion. When content is presented from a media illiterate approach, the role of media becomes critical in the promotion and reproduction of racism. Generally, the media in Lebanon views the “stranger”—the foreigner, migrant, refugee, displaced, and minorities—as a problem rather than as an integrated part of the hosting society.

Despite exercising caution and maintaining objectivity during the coverage of major events, covering events related to the displacement of Palestinian refugees into Lebanon  in the media directly reinforces the racist prejudices of a people already convinced that “displaced persons and refugees are the ones behind the problems and riots.”

This manifestation may stretch the bounds of the crisis’s on-the-ground reflections and provide material for inciting fear of the other, “the stranger,” distributing hate speech, and trying to play the cards of identity, being, demography, sustenance, and national security.

Incitement of Fear and Reviving the Black Days of 1975

The main concern portrayed in Lebanese media is that the displaced’s numbers exceed  the capacity of the country. The rhetoric condemns the other as a risk or threat to the cohesiveness of groups in society, leading to isolation and disengagement of Palestinians based on identification.

Part of the instillation of fear is backed up by arguments that refer to the presence and participation of the Palestinian Liberation Organization during the 1975 Lebanese Civil War, feeding the fear that the “Palestinians” are interested in Lebanese lands and affairs.

This claim serves as a propaganda tool by policy-makers, as it contributes to the idea that there is no differentiation between the PLO, the militias, and the Palestinian civilians.

Ironically, there is evidence of anxiety between Lebanese people about the number of Palestinians, and rumors to that effect have abounded since the Lebanese conflict. The fear game takes a difficult turn in these dynamics since the number in Lebanon is at the origin of the fear equation.

According to the Maharat report, this fear cannot be backed up by numbers since the Lebanese do not conduct their own population surveys, as the most recent one was conducted in 1932. Although many studies were published in the 1980s and in recent years, they are not official figures and have often been questioned for credibility.

It is also notable that the media in Lebanon, a neighboring country to Palestine, does not cover Palestinian concerns except during major events. In such cases, most of the coverage on Palestinian concerns is either presented briefly towards the end of a newscast or on the inside pages of print media.

For example, the report found that the locations for press coverage of refugee concerns including Palestinian issues were distributed as such: 88 percent on inside pages, and only 12 percent on main pages. They were completely absent from the front pages.

When it comes to the Sheikh Jarrah forced displacement incident , results have also shown that Annahar Al Arabi was the sole print Lebanese media outlet that covered what was happening in Palestine, although its reporting was not in support of the Palestinian cause.

It is important to acknowledge that the media plays a key role in shaping public opinion and paving the general pathway for peace journalism. In Lebanon, media ownership is a key factor in determining the narrative, reinforcing stereotypes, and choosing what is news and what is not news. Yet more people are becoming media literate today  and the notion of plurality has become a requirement for professional competency—and in return, financial success.