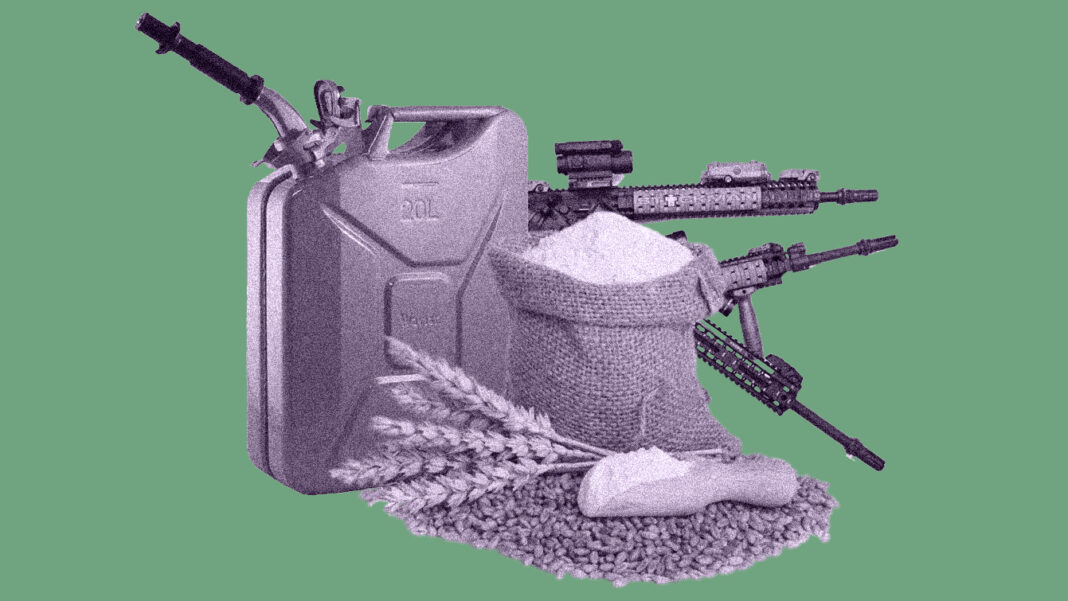 Russia’s war on Ukraine has thrust the world towards an unknown and dangerous destination where global food security, whether related to production or imports, stands at risk. The invasion has had far-reaching repercussions on countries beyond Russia, Ukraine, and their neighbors, including the Middle East and North Africa region.

Despite a difference in causes and circumstances, the world is teetering on the edge of an economic downturn that is no less dangerous than the financial crisis of 2008. The danger beyond the repercussions of the Russian war on Ukraine, with economies around the world already weakened by a two-year war against COVID-19 and its many variants.

The World Food Program’s warning of a food crisis in the war-torn areas of Ukraine is only a broad headline of the reality to expect, with the risk of exacerbating famine around the world still at large due to the suspension of production and export of food products—most importantly, grains.

The state of food security

The war in Ukraine may impact the world’s supply of essential crops such as wheat, corn, and sunflower oil, leading to an increase in the price of food and famine. The situation threatens global food security and fuels geopolitical tensions, a scenario that Gilbert Houngbo, head of the International Fund for Agricultural Development at the UN’s World Food Programme (WFP), warned about—and one that is becoming a reality.

As is the case with most crises, the greatest harm comes to the poorest and weakest countries. Given the current state of Lebanon’s economy and the multi-faceted crash it has been experiencing in recent years, will the country be among those severely affected by Russia’s war on Ukraine? Is Lebanon facing an actual threat to its food security?

“The different crises Lebanon is going through affect food security in many ways,” Etienne Careme, the acting representative of the UN’s Food and Agriculture Organization (FAO) in Lebanon, told Beirut Today.

“Some studies show that access to food is an issue to all communities in Lebanon because of the devaluation of the Lebanese lira,” he said. “This access is also constrained by the hike in the prices of many food commodities and the deteriorating incomes of households, which has made the purchasing of staple food unaffordable.

Careme clarified that 34 percent of Lebanese, 50 percent of Syrian refugees and 33 percent of refugees of other nationalities are food insecure in Lebanon as of late 2021, and that the crisis in Ukraine will negatively affect global production and increase the prices of wheat imported to Lebanon.

The different crises, according to Careme, also affect Lebanese farmers. through an increase in the prices of resources necessary for continuing or starting the food production process. Resources are being imported and sold at the parallel market rate, which is not affordable for a big proportion of farmers. The same applies to Lebanese fishers.

“This results in a low-input system and consequently a decline in yields and marketable production, putting the 2022 agriculture seasons at risk,” said Careme.

Supporting the agriculture and agrifood sectors remain important to the agenda of FAO Lebanon, he added.

The threat of famine in the region

About 40 percent of Ukraine’s wheat and corn exports go to the Middle East and Africa, areas already suffering from food security issues. Further food shortages may cause an increase in prices and fuel social unrest.

According to the UN, one in ten people do not have enough food to eat. Millions have also fallen into poverty and hunger as a result of extreme climate-related disasters and the COVID-19 pandemic.

Russia’s war on Ukraine, already a tragedy for those directly involved, would be disastrous for the entire world—and particularly those already struggling to feed their families.

The Arab world in specific fears the Russian war on Ukraine because many of its nations rely heavily on importing grains from the region. Arab nations even imported around 35.3 percent of Russia’s and 42.1 percent of Ukraine’s total wheat exports in 2020.

In the same year, Arab countries imported a total of 20.76 million tons of wheat—or around 10.8 percent of total wheat exports in the world. This indicates both a great dependence of Arab countries on wheat and the importance of such a market on a global scale

The repercussions of the Russian war on Ukraine extends beyond the wheat and grain crisis,  with other factors pushing the world to famine. Particularly, importing countries have started to feel the fuel crisis the conflict has led to.

The global rise in the price of fuel will exacerbate the trade deficit of weaker states, including Lebanon, and increase their need for hard currency to cover their costs. In turn, an uptick in the price of oil will increase the prices of goods in local currencies. Experts and analysts predict such a fate for Lebanon.

The price of oil has already increased globally, hitting a high of $140 per barrel before slightly declining. The future of the industry appears to be grim, with international institutions predicting fuel prices to hit $200 if imports from Russia are banned.

Such an increase will affect local prices, adding yet another layer of hurt to Lebanon’s crisis and increasing food insecurity because the entire production process is tied to the cost of fuel.