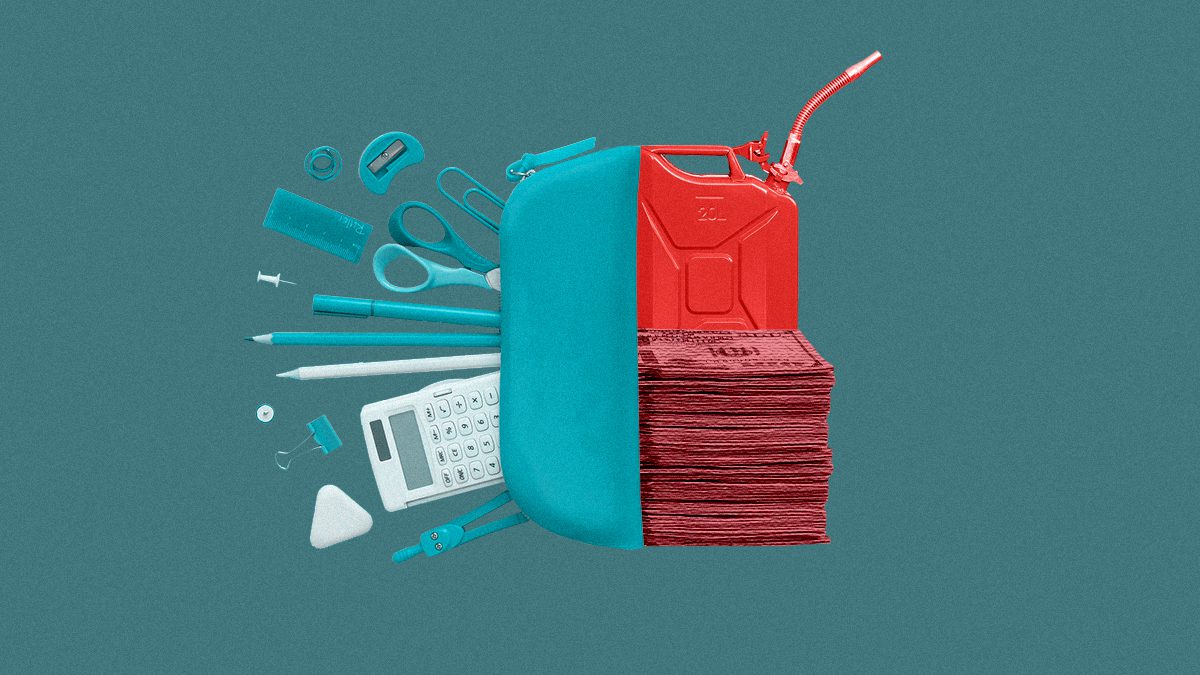 States parties recognize the right of the child to education, and with a view to achieving this right progressively and on the basis of equal opportunity, they shall, in particular.

Article 28, the United Nations Convention on the Rights of the Child

This statement seems irrelevant today in a country that ratified the international treaty in 1990. The Lebanese economic crisis, amplified by the COVID-19 pandemic, has forced tens of thousands of parents in the country to either completely remove their children from school or transfer them to public schools.

More than 737,000 children of Lebanese, Syrian and Palestinian descent in Lebanon were out of school in 2021, according to data published by the UNHCR. This marks a third of the school-age population. Mount Lebanon Governorate alone houses 45 percent of these children, with the data showing that 318,000 children in the area are not attending school.

“I leave the house in the morning to go play in the construction site near us then come back when my mom calls me,” said 12-year-old Ahmad. His parents were forced to remove him from his public school this year. The price of fuel skyrocketed when the Lebanese government stopped subsidizing it in August 2021, and his family can no longer afford transportation fees.

As poverty tightened its grip on people in a failing Lebanese state, parents took the arduous decision to inform their children that they are either never going back to school or that they will continue their education in state-owned public schools—the latter largely proving unsustainable this year amidst countless teachers’ strikes.

Teachers too are struggling with their share of the Lebanese crisis, their current salaries hardly getting them through the first week of the month. Meanwhile, over 53,000 students moved from private to public schools between 2020 and 2021. Another 34,000 never went back to school after the pandemic started.

“This filthy van driver raised his price and now we cannot pay him anymore. I would walk to school but what if it is raining, what will I do then?” said Ahmad angrily, innocently blaming his van driver instead of state policies as he is completely alienated from Lebanese politics in his secluded home in Kafaroumen, South Lebanon.

Ahmad’s family fled to Lebanon ten years ago to escape the war in Syria. For years, his parents wearily tried to furnish a “normal” childhood for him by putting him in school so he can meet friends and live the life that any child deserves. Yet, the current economic hardships took that away from them.

An estimated 30 percent of Syrian refugee children have never been to school. Ahmad is one of tens of thousands of Lebanese, Syrian, and Palestinian forced out of a formal education since 2019. The causes for this phenomenon can be traced back to three reasons.

School supplies are too expensive

Buying new stationary for school has become an act only the rich can afford—with the Lebanese Lira plunging in value these past two years to reach an all-time low of nearly LBP 34,000 per 1 US Dollar on January 11.

The price of a BIC pen, the most used pen in the world, significantly rose from LBP 250 in early 2019 to over LBP 5,000 today. Meanwhile notebooks are being priced in US dollars by most libraries, going up to $15 for one notebook (LBP 345000  at today’s exchange rate, or half the minimum wage). Curriculum books follow the same trend with some costing over LBP 1 million.

Schools are also to blame here, with many still using the same expensive books they had been using before the collapse in their classrooms even though significantly cheaper alternatives exist.

Ultimately, as the financial meltdown deepens, those products will become more and more inaccessible. More parents will remove their children from school for the mere reason of not being able to afford school products.

Transportation costs are too high

Transportation prices soared as the Central Bank ended its decades-long fuel subsidies that had been depleting its reserves for years. Fuel accounted for about half of the hefty $7 billion per year cost of subsidizing fuel, wheat, and medicines.

With that, vans—one of the most common ways of transportation to and from schools in Lebanon—witnessed an alarming hike in prices. This left thousands of parents wondering how they will take their kids to school.

Many parents in Lebanon, like Ahmad’s, either do not have a car and strictly rely on public transportation to commute or would rather save their fuel to get to work and make money to sustain the family. They are forced to prioritize between their children’s education and keeping the family alive.

“We already took a huge blow when schools turned online for a year and half because of Corona. We have to live,” one of them tells Beirut Today.

Schools have shut down

A noteworthy aggregate of schools all across Lebanon have been forced to close down for good after not being able to afford fuel for generators, maintenance costs, and keeping up with the demands of their teachers in regard to raising their salaries. Many of these schools are the only schools available in their isolated areas.

With the closest school being many kilometers away, parents decided that removing their children from school altogether would be the most feasible solution to avoid complications and save money.

With that in mind, a lot of schools are still standing strong either because they receive funding from the outside (like International College) or because they are heavily supported by local Lebanese political parties that must maintain a stronghold over them and provide quality education to their students to make sure their parents are pleased (like the Amal Educational Institutions).

After all, the Lebanese parliamentary elections are coming up in May 2022 and all the Lebanese political parties will be on their best behavior until then.

Non-formal education in the “Republic of NGOs”

Since Ahmad stopped attending school, an NGO whose name he could not remember, has been trying to fill the void by giving him lessons in basic subjects. But this NGO is not as consistent as his old school and could never completely replace it. What it does, however, is provide much-needed free transportation to its center.

These charity organizations exist all over Lebanon. They are part of the “Republic of NGOs” that has replaced the state in the education, healthcare, food, agriculture, and construction sectors.

These organizations have been the only way towards sustaining life for thousands of families across Lebanon amidst the complete paralysis of state institutions, which would have been a cause for alarm in any other country.

Prior to the economic collapse, these institutions, specifically ones concerned with education, did not reach people in any notable effectiveness as one looked farther away from Beirut.

Today, they provide “non-formal education” to 40,788 Lebanese and non-Lebanese children.

Today, children who are out of school in Lebanon are either subject to child labor, are out in the cold streets begging for money, or spend their days doing nothing. Not only has an essential human right protected by tens of international treaties been stripped away from them, but their childhood is also disintegrating in front of their eyes and there is little they can do about it.

An entire generation’s dreams and ambitions are being crushed, their only fault being alive in a country whose successive governments have spent less than 3 percent of the country’s GDP on the education sector every year since 1993—around $1.2 billion annually.

The future of education in Lebanon looks bleak and uncertain. It is difficult to be anything but pessimistic after entering the new year with more teachers’ strikes, the continually-plummeting Lebanese Lira, higher fuel prices, more expensive school stationary, and new variants of COVID-19.

Unfortunately, 2022 will force even more parents to take the impossible decision of telling their children to bid farewell to their schools.

Watch | Riwayat: Higher Education and the Commodification of the Future