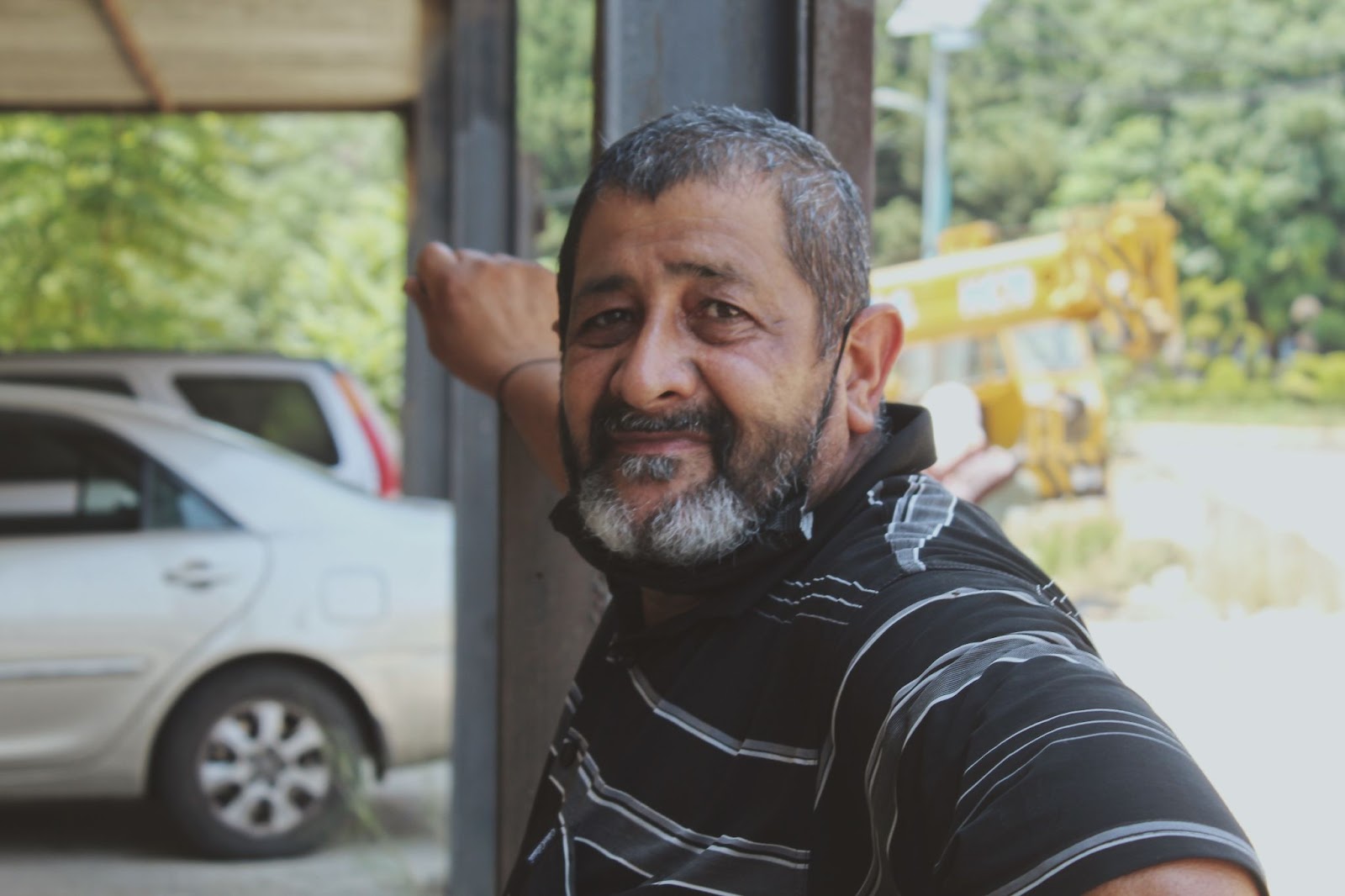 Hopeless Drive: Lebanon’s Fuel Crisis Through The Eyes of A Taxi Driver

While the confines of his old Toyota Corolla Couple are a liminal space of transition for his passengers, Mohammad Harb has been driving people around in it for the past 15 years. He always found joy in getting to know people from different places, each with a compelling story of their own to share, but the 54-year-old taxi driver has been struggling to make a living for the past year.

The spike in fuel prices has taken its toll on everyone, especially taxi drivers whose lives center around the commodity.

Mohammad thought his struggle peaked on June 29, when fuel prices were raised exponentially, but recent announcements from Central Bank Governor Riad Salameh to lift subsidies from fuel imports have added yet another mountain of obstacles to his work.

“Everything has changed,” Mohammad says, implying that his old lifestyle is long gone. “It is 3 PM now. I have not had a single passenger all day. People cannot pay.”

Mohammad,  a taxi driver in Nabatieh, South Lebanon, used to get his first passengers as early as 7 AM two years ago, and would keep on driving people around until 10 PM. This once made him a modest living wage that helped sustain him and his family. Now, he says he’d be lucky to drive 10 people all day.

“Yes, we raised our service fee when the price of fuel increased but that does not mean we are making profit,” Mohammad says.

He says the problem lies in “empty trips,” where can have 4 passengers at a time but none on his trip back to his waiting station in the center of Nabatieh.

Every kilometer travelled means more and more losses. He has reached a point where he calculates every kilometer he drives, because any decrease in his gas tank during a passengerless drive contributes to more heavy losses that he can no longer afford.

Mohammad is very pessimistic about the future of the country, including the fate of Lebanon’s public transportation system.

“The country is a jungle,” he says.

“The fuel distributor guts me, I gut the passenger, and the passenger guts someone else. I have to change oil regularly and each liter costs LBP 300,000 . I might have to increase my service fee to over LBP 20,000 if the situation remains as it is. So will other taxi drivers in Lebanon.”

The current price of what is commonly known as the “service,”a cab in Lebanon that transports several riders at once, is LBP 8,000. With more than half of the Lebanese public transport drivers lacking the suitable license to practice their profession, this price can vary –since they are not subjugated to the decisions announced by the General Syndicate of Lebanese Taxi Drivers.

On one hand, the answer might be in tripling their service fees to accommodate the increasing fuel prices. On the other hand, they know that any additional raise in price will threaten a large population’s only way of commuting.

Many drivers also pick up jobs on the side to put food on the table.

As hard currency reserves depleted in 2020, inflation grew, the country’s gross domestic product (GDP) fell, and the Lebanese lira collapsed. This made it more difficult to pay foreign fuel exporters in dollars.

The price of fuel cans started increasing to reach LBP 33,500 in the first half of 2021. This created a shortage that, in turn, gave birth to endless queues at gas stations, a frequent scene associated with Lebanon. With that, many local gas stations started closing down.

In an attempt to combat the fuel crisis, the government cut fuel subsidies by a significant portion. Fuel became priced at LBP 3,900 for one dollar instead of the official LBP 1,500.

This doubled the price of the gasoline tank, reaching LBP 73,000 per one tank. Then, as the Lebanese lira/US dollar exchange rate reached an all time high of LBP 24,000 per dollar on the parallel market, the price of a gasoline tank was raised again to LBP 75,600.

The fate of fuel subsidies currently hangs in the balance. In August 2021, Riad Salameh announced that Banque du Liban (BdL) –Lebanon’s Central Bank– can no longer open credit lines to import and subsidize fuel. The next day, he was called in for a meeting with President Michel Aoun –who asked him to abide by the “exceptional approval” to continue subsidizing fuel imports until the end of September.

People’s misery doubled, but queues did not shorten.

This price will continue to rise, with the rapid devaluation of the Lebanese lira and  amidst a complete absence of a substitute public transportation network plan or initiatives to combat the fuel shortage. Last week, media reported that an unsubsidised fuel tank may cost over LBP 300,000 –and gas stations halted their distribution to a panicking public in expectation of the lifting of subsidies until military and security forces forced them to open.

Ibrahim Rizk, manager at Morkos Coral Gas Station in South Lebanon, has been seeing several kilometer-long queue lines at his petrol station since the early months of 2021.

“The Internal Security Forces do regular raids to bust hoarders of fuel, but what about smuggling? Who is stopping the smugglers?” Ibrahim asks.

“What they show in the media is not nearly as close to the true gravity of the situation. As long as our fuel is cheaper than Syria’s, most of our gasoline will be smuggled and waiting lines will get longer.”

Unlike Ibrahim, fuel importing companies blame the fuel shortage –and thus the spike in its price– on the Lebanese Central Bank and its policies. The latest decision to offer credit lines to fuel importers at the market price of the Lebanese lira should alleviate shortages and hoarding, but pushes citizens and residents further into poverty without an overhaul of the financial and public systems and a solid, transparent recovery plan.

The Lebanese fuel shortage can mainly be traced back to three main factors: smuggling, storing, and delayed shipments.

Although a number of people are hoarding immense amounts of gasoline gallons and storing them only to sell them later at a higher price, and fuel shipments are getting delayed due to a slow Banque Du Liban process in opening credits for fuel imports, smuggling is often seen as the number one cause for fuel shortages in Lebanon.

Smuggling has now become a process that involves a complex network of prominent high level security personnel and politicians. People hide gasoline in their trucks or cars, and cross the 400-kilometer stretched Syrian border to sell relatively subsidized fuel for triple the price. Syria has been struck by a severe economic crisis that stems from years of devastating war.

To get to the other side, smugglers bribe patrol army guards to allow them to reach Syrian lands with no obstacles. The rigid nature of the area that separates Lebanon from Syria helps smugglers make hidden routes that are difficult to track.

Mountains, hills, and rivers make it a hard task for the army to track them down. With that being said, the army has shown grave weakness in combating the issue. Their frequent busts are just not enough.

In our conversation, Ibrahim implies that the only solution to the fuel crisis is lifting fuel subsidies completely to stop smuggling. Although true, it is not feasible.

Removing fuel subsidies would raise the current price of a gallon of gas by almost four times. This would make Lebanese fuel more expensive than Syrian fuel and would consequently stop the smuggling trend, ending the shortage. Its effects on the people, however, would be catastrophic.

Taxis, Ubers, Careems, and Bolts are already vanishing. People like Mohammad Harb are losing their jobs. Lifting fuel subsidies would abolish what is remaining of a below-average Lebanese public transportation system.

It would also make it nearly impossible for people who own personal vehicles to fill their cars with gas as the new price of one tank would be almost half the Lebanese minimum wage –once equivalent to 450 dollars but today worth around 30 dollars. Other items powered by fuel or that require transportation would also significantly increase in price; something many cannot afford amidst the collapse.

Private generator subscriptions would shoot up in price. Food products would become even more expensive, with Lebanese families already spending an average of five times the minimum wage on food alone. Hospitals, some already turning patients away for lack of fuel to power their machines, would increase the cost of their life-saving services. In other words, it would be a disaster.

The human cost of hoarding

With that in mind, hoarding fuel has also added to the misery of taxi drivers and forced them to be humiliated in gas queues under the blazing Lebanese summer sun. People store tens and hundreds of fuel gallons to sell them for triple the price to those who wish not to wait four hours in line outside a gas station. This created a black market for fuel that only the rich can access.

This act is not just dangerous, as fuel cans stored in tight spaces are ticking time bombs that can explode even if one spark is ignited next to them, but it also deprives taxi drivers in Lebanon of a commodity that they rely on to keep a roof over their head.

On Sunday, a fuel tank explosion killed 28 individuals and injured 79 in Akkar. Many of the wounded are in critical condition at hospitals, which put out a call for aid to receive basic medicines and fuel to treat their patients.

Lebanese military and security forces had seized a hidden fuel storage tank in Altalil and were distributing it to residents at the time of the explosion, with eyewitnesses telling Reuters that 200 people were nearby when the tank ignited. The cause of the explosion, thought to be either the spark of a lighter or a gunfight, remains unknown but the fuel tanker was reportedly being prepared for smuggling to Syria.

People who cannot afford personal vehicles have found themselves struggling to afford the commute to work. With services extremely centralized near Lebanon’s capital, a  large number of people take the long trip from their towns or cities to Beirut every day to get to their jobs.

For a person living in North Lebanon and working in Beirut, , a daily trip to their job would cost them LBP 15,000 for a bus from their area of residence to Beirut, then another LBP 8,000 as a “service” fee from the bus stop to their place of work. That person would also need the same amount of money to get back. Averaging 5 working days per week every month, this commuter would be spending LBP 920,000 every month as transportation fees –while the minimum wage in Lebanon is still LBP 675,000 per month.

Not only does decentralization decrease the transportation costs on employees, it also leads to positive nationwide development outcomes by creating new job opportunities and easing traffic bottlenecks in and out of Beirut.

The spike in fuel prices comes at the direct expense of drivers like Mohammad Hareb, whose profession has long been neglected by officials.

As the crisis worsens, they live each day not knowing what lies in their future and whether they will be able to provide for themselves and their families.