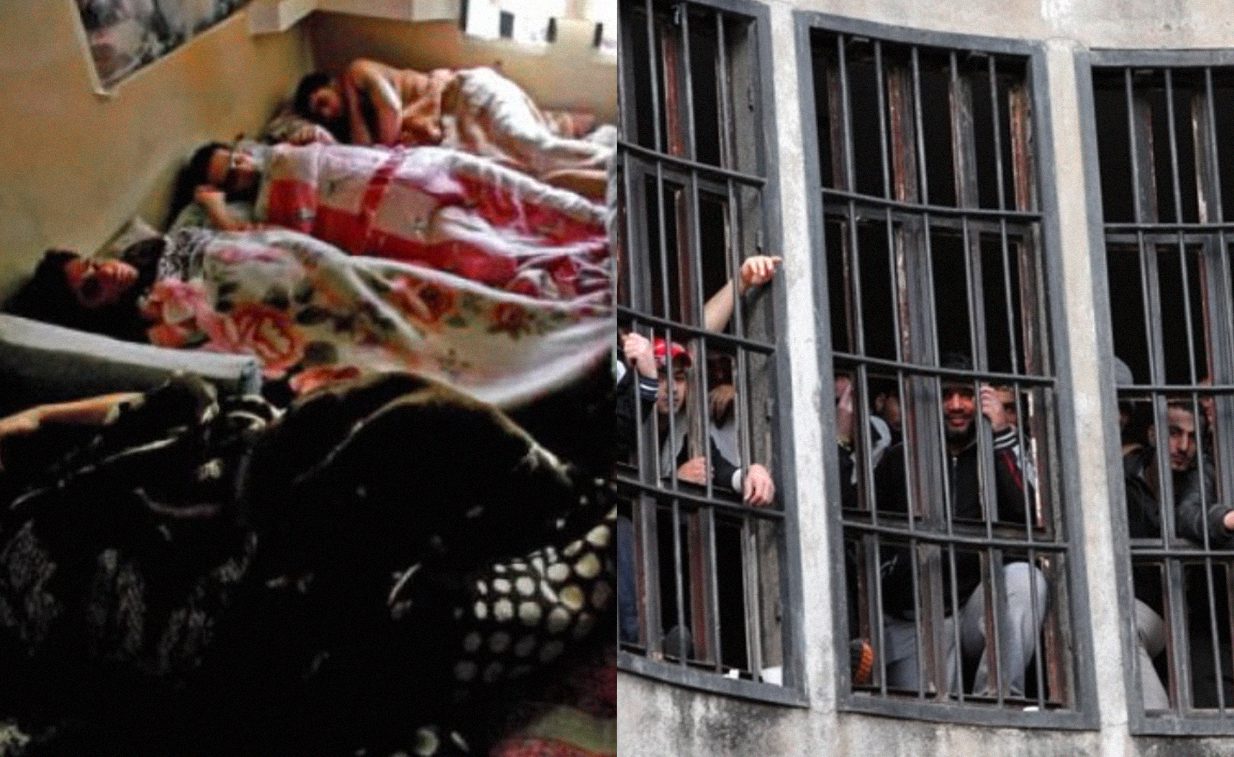 Roumieh prison: A graveyard for the living

The economic crisis, coronavirus outbreak, and electricity rationing have broken through the bars of Roumieh prison and threatened the lives of around 4,000 inmates.

Suffering from severe power outages and water shortages amidst immensely hot weather, overcrowded cells, and an inflated prices of purchasable goods, inmates are calling out for help.

“The situation in Block D at Roumieh prison is catastrophic,” Saadallah, an inmate of Lebanon’s largest central prison, told Beirut Today. “There’s no electricity, no drinking water, and the food is inedible.”

He also spoke of soaring inflation in the prison shop, where inmates are allowed to purchase some of their necessities, where a kilo of beans now costs LBP 30,000 and a kilo of rice LBP 20,000. Inmates also regularly barter by trading food and other goods.

When you’re sentenced to prison in Lebanon, you bid farewell to your human rights. You are forgotten in a country that is being dragged to “hell,” as its president once said, by the hands of a government whose incompetence has turned into a crime against prisoners, their families, and the general public.

The electricity rationing has hit prisoners particularly hard given the absence of fans, the unavailability of refrigerators for food storage, and the inability of inmates to heat food using a microwave or any electrical appliance, according to the Head of the Inmates Right Center at Tripoli’s Lawyers Syndicate Mohamed Sablouh.

Without any official figures coming out of the prison, prisoner accounts of how much electricity they are receiving per day range from two to twelve hours per day.

“We are facing a catastrophe,” Sablouh told Beirut Today, also blaming the Ministry of Health for failing to allocate properly-equipped emergency clinics or field hospitals to treat urgent cases.

Maher, an inmate sentenced to the death penalty, criticized the inflated prices in the prison market, and was dismayed that human rights groups have overlooked the inmates at Roumieh.

The situation is difficult, and “will only grow more difficult without our attention dedicated to it,” said the lawyer Sablouh. “Because of the financial crisis, the Ministry of Interior Affairs will reach a point where it will be incapable of providing food for inmates –who are already unable to purchase their own food due to the massively inflated prices.”

He also revealed that the prices of food in the prison shop are much more expensive than the prices outside.

Prisoners agree that the food is inedible. The bread, they say, has a pungent smell and inmates are limited to two loaves per day. In instances when the quality of food provided is better, it’s not enough for all the inmates and sometimes leads to fighting among prisoners.

Sablouh affirmed that prison administrations are now incapable of providing medicine and medical services to inmates, forcing prisoners to pay their own medical fees, particularly those who  need to be operated on.

No health and medical services

As a prisoner in block D, Saadallah disclosed that several prisoners had experienced skin infections and allergies. Some had their beds and sheets rot as a result of an increase in temperatures, high humidity, and bad ventilation.

The prisoner also fears being kicked out of his cell and having his bed taken by the sergeant responsible for the room due to his inability to meet certain payments.

Similar themes also emerged in conversation with another inmate, Imad. He highlighted a severe shortage of potable water for drinking and bathing, no medical services, and a treatment that denies inmates’ their most basic human rights.

Imad also told Beirut Today that the Block D experienced an outbreak of scabies, a skin infestation caused by mites that can live on your skin for months if left untreated. Rats, a natural host for the microscopic mite that causes intense itching and rashes, were found in the block’s water tanks.

Maher also spoke of the skin allergies and itches. While he doesn’t believe them to be scabies, he added that they “appear to be the result of the potable water.” He confirmed pimple-like rashes across the bodies of prisoners.

“I’ve been in Roumieh prison since November 16, 1993,” he told Beirut Today. “Since then, we haven’t been through conditions as difficult as the ones we’re facing today. If a prisoner gets sick or needs to be admitted to the hospital, they have to pay a deposit to the hospital to be transported.”

Maher also specified that contact between inmates and their families is very minimal, as a result of broken prepaid payphones.

The only positive news, according to Saadallah, is that the building has no COVID-19 cases.

“They give inmates sedatives to keep them asleep or mellowed out,” said Imad, who has been a resident of Block D for the past eight months. He denied ever seeing a COVID-19 vaccination campaign in the block, instead suggesting that doctors prescribe the prisoners with sedatives.

Meanwhile, Maher says inmates who show symptoms of the coronavirus are transported to a different building where they are quarantined for 14 days –but not given any treatment or medicine.

He likened Roumieh prison to the infamous Guantanamo Bay detention camp, describing the former as much worse than the latter. He shared the story of an inmate, Joseph, who experienced shortness of breath and was forced to wait three hours for an ambulance. En route to the hospital, Joseph passed away.

The inmate also notes that many inmates signed up for COVID-19 vaccine. After some time, the prison administration declared that they had been inoculated even though many did not actually receive the vaccine.

Six when there should be one: Overcrowding

“We became forgotten when we went between the two doors,” said Imad, who realised over time that no supervisors visit Block D.

“Between the two doors” is an expression familiar to most prisoners, signifying the process of entering the prison: Prisoners pass through the front door and enter a lobby, before passing through a second door to start a miserable life with no respect for human rights or United Nations charters.

“What’s happening in prisons is massive overcrowding, which in some cases has pushed prisons to 182 percent capacity. Roumieh prison is built to house 1,500 inmates, but at some point in the past the number of prisoners reached around 5,000. Currently, it’s estimated to house 3,600 prisoners,” said Sablouh.

Unofficial sources estimate the number of prisoners in Lebanon to be 7,000, out of which 3,600 are at the Roumieh central prison –currently functioning at above 300 percent capacity, as it was designed to hold 1,050 inmates.

The overcrowding can partially be blamed on judicial negligence, random arrests by security apparatuses, and the misapplication of the law that demands the release of prisoners after a certain period of time depending on the crime committed.

On the topic of judicial shortcomings, Sablouh clarified that the law is clear on the maximum number of months a person can be detained without a trial or a sentence (according to the type of crime) but that nobody abides by it.

In some cases, people are detained for days or months on end, after which they are transferred for investigation with a judge who can set their file aside for months.

When asked if a law on general amnesty could help with the overcrowding, Sablouh said the law will not do justice to all. Despite that, he believes officials must take urgent measures with regards to overcrowding to protect prisoners –and that they have two options: Reduce the number of years prisoners are sentenced to, or apply a fair and secular general amnesty law.

Structural roots to the issue

The Roumieh prison catastrophe is not new, said Sablouh. It is the product of years of neglect.

Lebanese governments have always overlooked prisons, failing to set in place policies that protect inmates and cater to their basic needs –with the Ministry of Health and the Ministry of Social Affairs failing to provide any medical oversight.

Sablouh observed that the media have not treated the suffering of inmates seriously, calling on organizations to spotlight the harsh reality facing prisons and the projects officials claim are underway.

He also noted the absence of civil society in the issue of prisons. Despite the fact that there are groups and non-governmental organizations that wish to help, the Ministry of Defense does not allow them to enter the prison. However, considering the difficulty of the current circumstances, they will soon be allowed to visit the premises.

The lawyer also highlighted the importance of creating a specialized committee capable of handling this humanitarian cause, as security agencies are trained to solve these issues with aggression.

The culture of deploying violence to deal with prisoners is an inherently misguided mindset that overlooks their human rights. Rather than aggression and degrading treatment, inmates need guidance and rehabilitation.

“When you go to prison for writing a cheque without sufficient balance, you can share a room with a drug dealer, and become a drug dealer yourself,” he said. “Someone enters prison having committed a simple crime, only to become even more of a criminal.”

He denounced the absence of rehabilitation programs, guidance and mentorship to help prisoners reassimilate into society after their release.

“Lebanon needs structural solutions to solve the overcrowding in prisons, which were created to rehabilitate and reassimilate prisoners into society rather than create a group that hates the government and society,” he said.