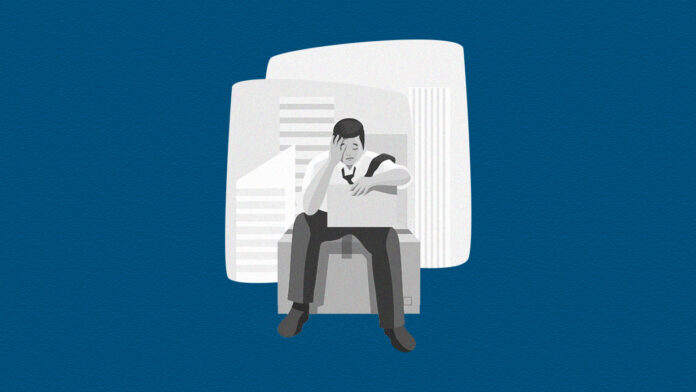 The Lebanese banking sector is now facing its fated dues, drawing potential routes for its continued existence by cutting down on those within it. Different banks are easing their loads and paving the way for restructuring and reform at the expense of their employees and their clients.

After holding their clients’ money hostage, wrecking their life savings and trampling on their rights, banks are now looking within. To save themselves, many banks have shut down multiple branches and are preparing to shut down many more. In the process, more than 2,000 employees have been dismissed so far. Will they receive their rights?

A holistic plan that can minimize expenses remains absent in the banking sector. Instead, each commercial bank has relied on closing down branches as per their individual need. To this day, no bank has been sued by any of its employees –but that is not to say that the pension and severance pays they receive are, in any way or shape, just and fair.

Banks generally rely on the same method to terminate their employees’ contracts: decreasing the number of employees individually rather than collectively, which then halts any attempts at unionization among employees against management.

Not a week passes without tens of bank employees being let go from their jobs. The compensation they receive might have been considered generous, if it had arrived before the lira’s deprecation and decrease in purchasing power.

Today, these severances may shut their ex-employees up but are not up to the standards set by the Syndicate of Bank Employees, which will confront banks if compensation is not adjusted and all those who lost their jobs are included.

Byblos Bank was responsible for the latest wave of contract terminations, with over 400 employees fired just a few days ago.

The majority of employees have their reservations about the amount of compensation offered to them upon their dismissal, but hold back on filing a complaint against banks.

“They’ll lose if they file a formal complaint against the bank before the Ministry of Labor, and then compensation will be determined according to what the labor law imposes,” a bank source tells Beirut Today. “In that case, compensation will be less than that granted by bank management.”

This reality has not bent the will of the syndicate from pushing its agenda forward and defending the rights of those who have been laid off. The syndicate is demanding that banks approach the issue more fairly and halt all individual terminations that “deprive employees of their rights.”

Even employees’ end-of-service pension –considered their last and only hope– has lost more than 85 percent of its purchasing power under the reign of the current crisis.

The syndicate and the Federation of Syndicates of Bank Employees in Lebanon have contacted multiple bank administrations to agree on a cohesive mechanism that governs the dismissal of employees –whether individually or collectively.

The president of the syndicate, Assad Khoury, showed no hesitation when he said that bank employees are bound to face a “massacre,” given that some bank branches already closed and other headed towards closure employ around 5,000 individuals.

Khoury tells Beirut Today that the Syndicate of Bank Employees has suggested a new compensation plan, prompted by questions on how these employees will be dismissed and what compensation they will receive

According to Khoury, dismissal payments would include 18 months of salary, plus two months for every one year of employment up until 36 extra months, along with the employee’s benefits as per their contract, and the legal notice months.

Another key demand states that the years of service should be considered if an employee has worked in more than one bank for a continuous period of time. The most important demand, however, is that health insurance coverage should continue for up to one year after employees are terminated.

At the end of 2019 and during 2020, several employees were pushed to voluntarily resign –as opposed to being terminated– following individual negotiations between them and managerial boards. These tactics no longer hold.

With the banking sector set on internally restructuring itself during the worsening financial crisis, banks’ management should find just solutions that ensure the rights of the employees that they lay off.

In the framework of their attempt to preserve workers’ rights, the syndicate backed a law proposed by a number of members of Parliament that adjusts article four of the Bank Merger Law.

“Article four used to grant between 6 months to about 36 months at the very most in the case of a merger,” explained Khoury.

The proposed amendment allows employees dismissed because of a merger, acquisition, or restructuring process to obtain 20 months of salary for the first year, in addition to two months of salary for every year of service up until 36 months. They also maintain the benefits in their work contract and a year’s health insurance as of the date of termination.

Khoury insists that the recommendations put forth should take into consideration the different ways in which employees are let go from their jobs, including individual termination.

According to Khoury, we can no longer individually negotiate with banks. Rather, a comprehensive formula must be drawn up and relevant amendments must be made to Article 4 of the merger law.

Not shying away from confrontation

Khoury says the syndicate’s endeavor to present the proposed unified law as an attempt to codify rights and avoid stalling, and attributes it to the refusal of bank administrations to meet the demands of those who are terminated.

However, banks may still refuse to apply the law after its approval –similar to their refusal to transfer dollars to students abroad, despite the approval of a law last year.

According to Khoury, the syndicate continues to deal with them politely, “but if the banks do not understand that our salaries have declined by 90 percent and that they must compensate for the purchasing power of our salaries at that time, not one bank owner will be able to set foot into their office in any bank.”

The syndicate is calling for a threefold compensation increase, “but if we estimate the purchasing power that our salaries now have, then we have the right to demand a tenfold increase, and not just a threefold increase,” Khoury said.

The president of the syndicate pointed out that the demands of dismissed employees today are the bare minimum that they can request.

“What if we asked you to pay employees’ salaries as you did in the good old days, meaning in fresh dollars?” he asked, addressing bank administrations.

Khoury stressed that the syndicate will continue pushing for its demands through a series of subsequent moves, taking into account both the living conditions of dismissed employees and the unstable situation of banks.

George al-Hajj, the President of the Federation of Syndicates of Bank Employees, prefers not to anticipate the future –especially since those who fired from banks have until today not objected and not submitted any complaints to the union. According to al-Hajj, this means that the compensation they receive at the time of their termination satisfies them.

“For the bank crisis to end, comprehensive solutions are needed in the country, including the formation of a government, the re-initiation of negotiations with the International Monetary Fund, and the implementation of reforms,” said al-Hajj. “When the state starts to deal with the crisis scientifically, only then can funds and investments return to Lebanon. After that, the situation of banks can take off.”

*This article was originally written in Arabic for Beirut Today.