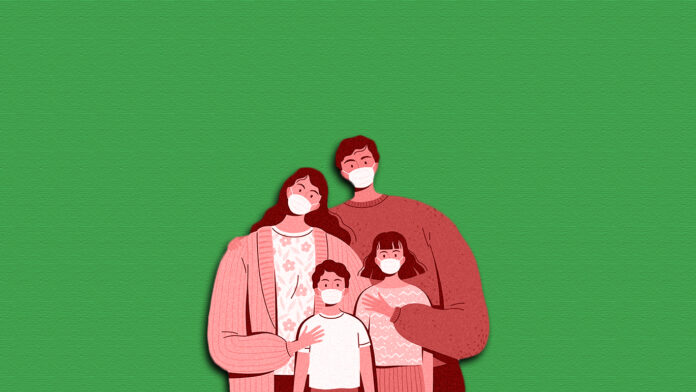 The COVID-19 pandemic has ravaged Lebanon for over a year now, with around 4,700 deaths and more than 375,000 injuries registered in the country as a result of both a disregard precautionary measures by citizens and the absence of government plans or social security nets that ensure constituents won’t go hungry while isolating in their homes.

The pandemic, which knows no color, gender, sect, or nationality, also forced Lebanese women married to foreigners and their families to bear a double burden –a result of discriminatory laws that pay no mind to basic human rights.

“Every day, our government shows us its the blatant discrimination against Lebanese women,” Karima Chebbo, a human rights activist and coordinator of the Lebanese Women’s Right to Nationality and Full Citizenship campaign, told Beirut Today. “With every decision it takes to aid Lebanese citizens, it violates the rights of Lebanese women.”

Chebbo explained that the repercussions of the COVID-19 pandemic are significantly exacerbated for the families of Lebanese women who are deprived of the ability to pass their nationality to their families. A discriminatory nationality law considers them to be foreigners rather than Lebanese citizens, which means they are ineligible for several benefits available to others.

Bearing in mind that Lebanese citizens are struggling even with the presence of national aid, the families of Lebanese women married to foreigners are in an even more precarious situation as they have not been included in any emergency plan put in place.

The Lebanese Women’s Right to Nationality and Full Citizenship campaign calls for justice and equality between women and men through the pursuit of full citizenship rights for Arab women, the reformation of nationality laws, and the implementation of the United Nations’ Convention on the Elimination of All Forms of Discrimination Against Women (CEDAW).

In collaboration with the Collective for Research and Training on Development – Action (CRTDA) and the Friedrich-Ebert-Stiftung (FES) foundation, the group of activists launched a new documentary “COVID-1925: Stop Discrimination” that sheds light on the human rights violations against Lebanese women married to foreigners and their families during the pandemic.

The title of the documentary references the 1925 Nationality Law, which prevents Lebanese women from passing on their nationality to their children. The law’s deadly effect has hit these women particularly hard during the coronavirus outbreak by preventing them and their families from accessing basic rights.

The campaign called on Lebanese authorities to approach the issue of women’s rights from the perspective of justice and equality, away from the flimsy arguments raised by the patriarchal system that governs the country. It also sought the amendment of the nationality law in compliance with international treaties and conventions, as well as lifting all reservations about CEDAW.

Chebbo stressed that it is the duty of the state to treat the families of Lebanese women married to foreigners in the same way it treats other Lebanese citizens and to eliminate all kinds of prejudices against them in the face of any crisis or pandemic that may emerge.

The film layed down the facts and shared video testimonies of the difficulties faced by Lebanese women and their families as a result of the measures adopted by the state during and after lockdown, including being stuck abroad and being denied aid.

Chebbo listed several human rights violations faced by women married to foreigners as a result of the pandemic in general and the lockdown in particular:

For Chebbo, these problems are nothing but the result of an unjust nationality law that discriminates between women and men.

The activist called for the “humanization of all discriminatory laws, especially the humanization of the nationality law that discriminates against women and their families,” adding the need to consecrate the principle of active and full citizenship for all.

“[We need to] abolish the violations that are practiced in the name of a law that is decades old,” she said. “The law practices violence across all aspects of the life of Lebanese women married to non-Lebanese men and their families, and denies their access to basic rights such as health, education, work, the participation in sports competitions, the exercise of talent, and so on. This comes in addition to the psychological consequences that Lebanese women pay dearly.”

As for the decision to vaccinate all residents in Lebanon regardless of their nationality, Chebbo gives no credit to the government.

“Giving the vaccine to the children of a Lebanese woman or her foreign husband is not a favor from the Lebanese state, because the World Bank has determined the inclusion of all people on Lebanese territory in the vaccine loan allocated to Lebanon,” she said. “But if we had left the matter in the hands of Lebanese authorities, things would have been different.”

“Any person residing on Lebanese territory in every crisis, emergency or pandemic must be treated exactly as any Lebanese citizen. They must be viewed as a human being, away from racial discrimination, as the coronavirus pandemic did not distinguish between people but rather affected everyone,” she added.

*This article was originally published in Arabic on Beirut Today.

Zeina Labban - August 5, 2021 0
Given the amount of stressors we face everyday in Lebanon, dealing with “Lebanxiety” is normal and should not be looked down upon.

Dreading August 4: On triggers and remembrance

Lynn Sheikh Moussa - August 3, 2021 0
Both a deeply personal experience and a collective trauma, the Beirut blast has marked our minds, bodies and calendars in unfathomable ways.

Scientists see light from backside of black hole for the first...

Laudy Issa - August 2, 2021 0
Scientists observed what the backside of a black hole for the first time and provided evidence supporting a prediction of General Relativity.