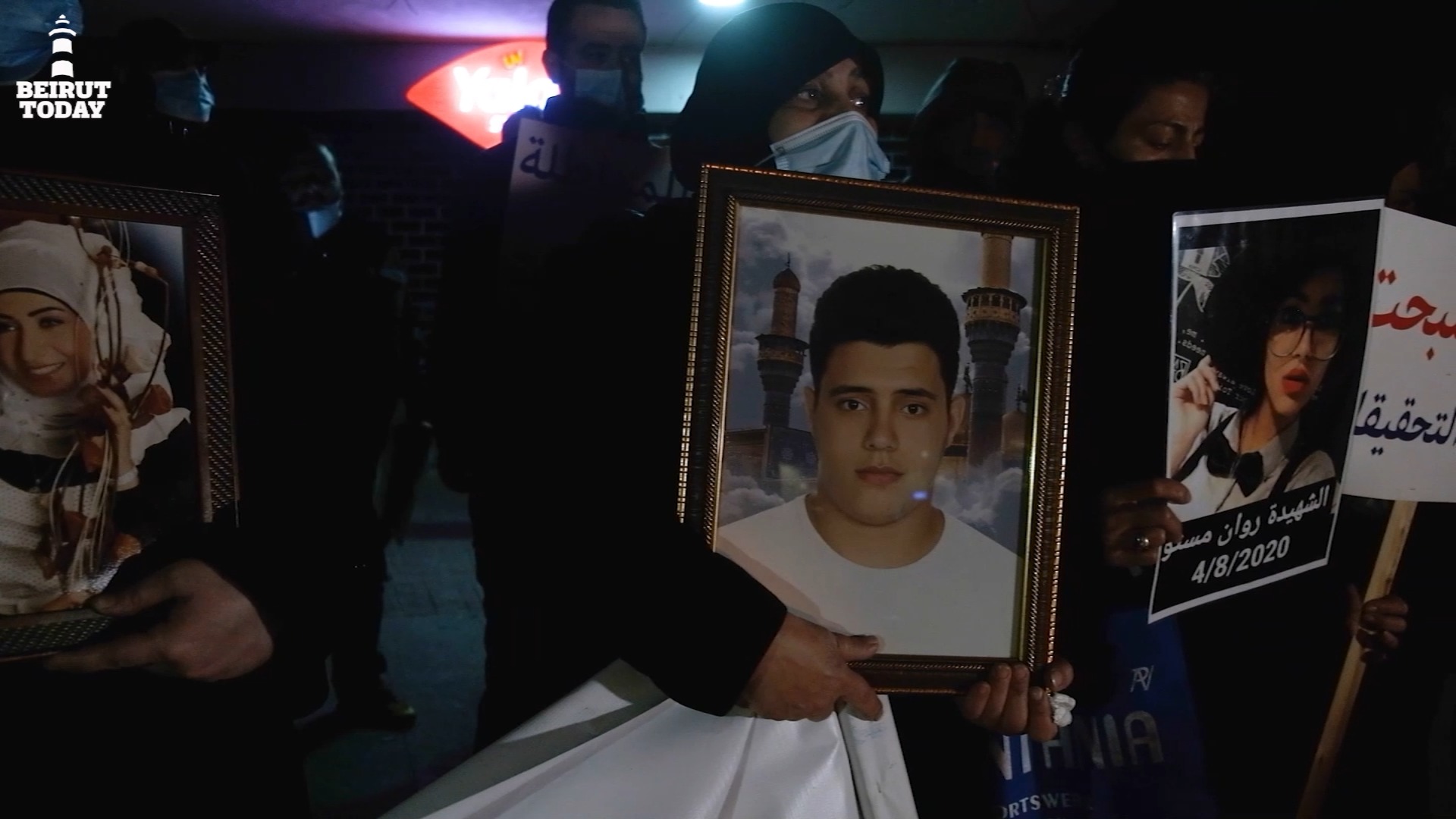 Families of victims of the Beirut port explosion protest the removal of Judge Sawan from the investigation on February 18, 2021. | Photo: Ghassan Mogharbel
Home
Community Voices
Activism

Uncontained Rage: The politics and socioeconomics of wrath in Beirut

In theory, a depiction of rage is often accompanied by a well-defined description of a backlog forcing it into existence. But, that’s not always possible. To live in Beirut –a city that was almost entirely wiped out in a matter of seconds half-a-year ago– is to manage anger that is undefined and so immense that it clutches one into numbness. Our rage is economic just as much as it is political.

Much of this sentiment is sustained by Lebanon’s decades-old political regime. For years, authorities have used tools of suppression to ensure that anti-establishment street mobility is diverted, levelled and kept at an almost invisible minimum.

However, rage that is silenced is not rage that is dissipated. The structure of the political system –one that is based off consociationalism– is inadequate and essentially designed to further emotions of fury, as evidenced by festered public sector institutions as a result of corruption, lack of an inclusive political vision, and a reality of nepotism that has made way for incompetence and life-threatening negligence.

Not to mention, the bureaucracy within levels of government has had its own adverse effects on citizen welfare, whereby formal needs are often delayed, ignored or slowed down for reasons that are unclear and undeclared. The consequence of poor policy practice is a political environment that is shy of citizen-focused considerations and so abundant of interpersonal inequalities.

Often, population wrath is silenced through an outright exploitation of Lebanon’s model of democracy. When people took to online platforms or peaceful protesting, there always was a buzzing sound blaming them for the current state of affairs –that they’ve elected those leaders they are revolting against.

In reality, a theory of rational choice is impractical if projected against Lebanon’s political economy. Come the 2018 parliamentary elections, citizens found themselves up against an electoral system that ensures the continuity of a political class of warlords and financial oligarchs. Most of the same people were voted back into power accompanied with a growing political unrest.

This unrest is triggered by a paternalistic mode of governance whereby political leaders assume they’ve cracked the code on behalf of the many –that they truly know what the people want and they’re there to protect them. Sequential governments have promoted a notion of “solidarity” by burdening the unprivileged with a cost of sacrifice, to help the state thrive and surpass hardships. In reality, any policies passed have politically and economically empowered the richest of elites and disfavored communities that those promised to protect.

The ordinary citizen has been forced into a convoluted social bubble that is regularly fed a concoction of unhealthy emotions that are, quite simply, unprocessed. Several movements preceding the October 17 protests, such as the Uprising of Dignity in 2011 and the 2015 protests amid a waste (mis)management crisis, have all amplified this snowball-like rage but they were never defining eras on their own.

It is also worth noting that even within each of those protest movements, there was an undeniable diversification of anger driven by a sense of community. In other words, anger towards the basic political structure of the country soon enough translated into one addressing economic grievances and inequality, gender-based violence, discriminatory practices, militarization of people against one another, sexism, and homophobia.

In October 2019, a decentralized form of street protest spread across the entire country calling for the fall of the Lebanese political regime motivated a gradual and historic deflation of this very same social bubble.

The political model I allude to earlier was being vividly challenged as geographies politicians had tight control over were being saturated with rage, in the most unfiltered of ways. Accordingly, and by use of patriarchal means of violence and suppression, protestors were beaten, verbally assaulted, and unjustly arrested for simply calling for basic life necessities such as formal employment, food, shelter, and education access.

Social identities in this country have been molded and governed by a sense of communitarianism whereby grief and frustration are almost always shared by the majority. Often, though, this reality is forced upon us by the mere doings of the political class.

On August 4, 2020, a blast with nuclear proportions struck Beirut almost wiping it out of existence. As a people who’ve experienced wars and conflicts across history, the first intuition shared by many was that this was yet another war.

No resident of Beirut would have dared to entertain the idea that this is a government negligence-induced blast, and not an actual war bomb. This is a blast whose remnants infested the psyche of many, but more particularly ravaged the livelihoods of vulnerable Lebanese, Syrian and Palestinian refugees, migrant workers among many other marginalized segments of society.

When it comes to national outrage, this now was a defining era on its own.

For the longest while possible, state-inflicted harm and violence were institutionalized and legislated for. Authorities have always utilized the rule of law –as biased and power-centered that is– to legitimize human right violations.

Sentiments of unrest instilled within the Lebanese society following the 2019 protests were deemed unprecedented. As a state and Riad Salameh-engineered Ponzi scheme which slashed out purchasing power of so many, was unmasked to the public, the saturation of ire was unfathomable and was no longer an abstract emotion.

Come a blast that ended the life of over 200 people and left hundreds of thousands homeless, the convoluted social bubble I spoke of earlier shattered to the ground and it became impossible to try and define any of this heartache. The last quarter of 2020 shaped a dark time for a country that’s historically ridden with war and poverty. The buildup of rage translated into either one of the following: an uncontained and uncontrollable force of rage or despair and loss of hope.

One glimmer of hope for the families of Beirut Blast victims was the investigative probe led on by Lebanese Judge Fadi Sawan, who had been investigating the explosion for half a year.

Sawan, who was assigned by political officials themselves after deeming him independent and trustworthy, was removed from investigations by the Court of Cassation yesterday. The request to remove Sawan, six whole months following the deadly blast, was reportedly filed by former ministers Ali Hassan Khalil and Ghazi Zeaiter, both of which, among other officials, were charged by him.

Families of victims were previously pushed back by Lebanese Security Forces when they were protesting in front of Sawwan’s residence to demand justice. Last night was a tipping point for those families, many of which have lost family members and any sense of economic certainty.

The unwelcoming attitude the families are constantly faced with, especially after yesterday’s political decision to remove the judge, is a crucial phenomenon worth examining in the context of Lebanon’s model of anger economics.

The lack of an economic vision and the abundance of political uncertainty has unveiled an often-clouded strain of Lebanon’s debilitating economy –a model of anger economics. The stagnant economic inequality coupled with an artificial sense of economic stability fueled by a financial oligarch-designed Ponzi scheme, and state violence remain at the heart of this model.

The symptoms of this strain include the disappearance of a middle class as a result of an unprecedented lira devaluation in modern times, thus reinstating a poverty trap characterized by food insecurity, unemployment, and compromised education access.

Thus, the lack of any informed policy intervention has created an idea that a resident of Lebanon is one to live a life in adaptation to fury. At a time of a global pandemic and a financial meltdown, an eradication of an impetus for political reform seems likely in the short run, but the reality could be indeed different.

For any sort of political rejuvenation to materialize, our rage needs to be defined, acknowledged and compensated for by policies that ensure safety, stability promoting job creation, adequate delivery of public services, and economic inclusion for all, as well as justice.

Otherwise, uncontained anger will remain the one tying agent for our social relations and therefore, our economic (dis)welfare.