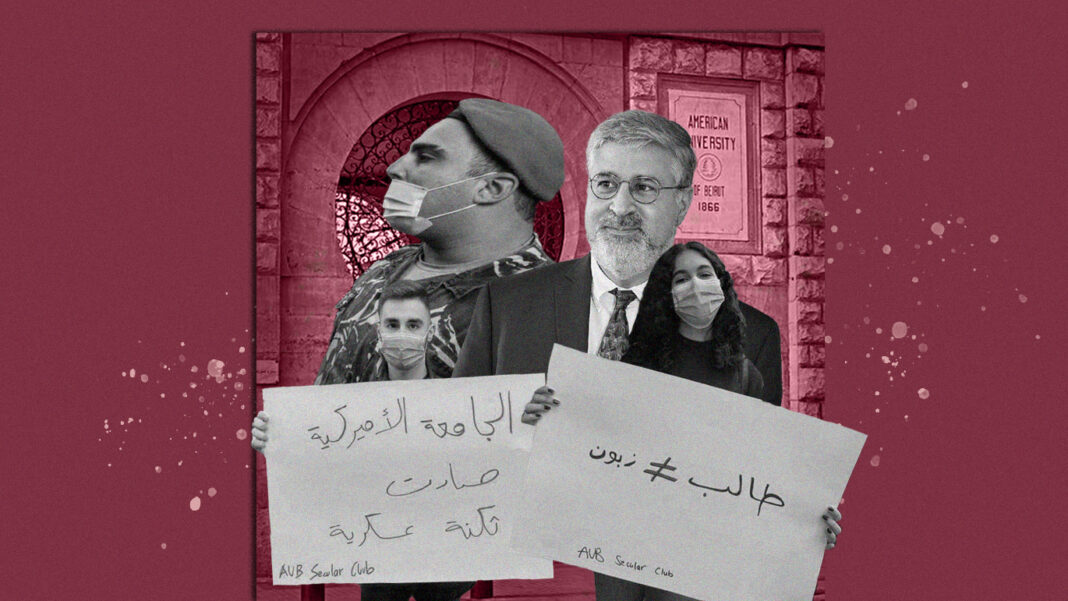 AUB students called for a tuition strike last week in response to the administration’s dismissal of student demands and after state security’s violent attacks against student protestors.

Around 30 different clubs, societies and other groups at the American University of Beirut signed a statement calling upon students to withhold paying their tuition fees until certain demands are met.

These include: “A reversal of the tuition dollarization policy, no significant increase of tuition in the upcoming semester, opening up a transparent channel to discuss these matters which respects the voices of the students, [and] an independent student council with more authority in all issues concerning students.”

It has also been revealed that a law may pass in Parliament enforcing the fixture of the tuition at the original LL 1,515 per dollar rate. In the hopes and likelihood that this occurs, AUB student activists are urging to stall tuition fee payments until then.

“There is a good probability that this law passes before the tuition fee deadline and will be an important card for any negotiable process pursued in the next few weeks,” reads a joint statement from the clubs. The tuition payment deadline is on February 5.

Do no harm, but ignore all evil

AUB President Dr. Fadlo Khuri announced on December 8 the increase in tuition to match the Banque Du Liban electronic platform exchange rate of LL 3,900, resulting in a 160 percent increase from the official dollar rate of LL 1,515. The decision was made unilaterally, leaving no room for negotiation or respect of student voices in the matter.

As per the new rate, AUB’s $24,000 yearly tuition equates to 93.6 million Lebanese pounds as opposed to the 36 million it used to equate.

The tuition hike comes at a time when Lebanon’s local currency has lost more than 80 percent of its value since mid-2019, more than 50 percent of the population has sunk underneath the poverty line, and unemployment rates are skyrocketing. Many families, being paid in liras at the official LL 1,515 rate, cannot afford paying the new tuition rate.

The Lebanese University, the country’s only public university, meanwhile remains underfunded and overwhelmed with students –rendering students without options.

AUB students exercised their agency through protests at the end of a finals week burdened by the stress of this knowledge, only to be met with police brutality while the university watched.

In an email, President Khuri profusely denied AUB’s role in calling in security forces or inciting violence against demonstrators but student protesters have cause to believe otherwise.

“The administration refused to allow their students onto campus after showing [their] IDs in front of the main gate,” Kassem told Beirut Today. “Whereas, they granted access to the Internal Security Forces (ISF) and the ISF were spread out across different areas on campus.”

While the ISF may have not been directed by the University to inflict any harm, the administration made no effort to protect its students, according to the student representative.

“AUB’s security took no action after witnessing their students being beat up by the ISF,” she said.

A tuition strike eventually materialized as “a way to enforce our presence as a student body, and to make sure that the administration negotiates this decision with the student representatives,” according to Kassem.

The promise of –and problem with– financial aid

In his letter on December 8, President Khuri reminded the AUB community that the LL 1,515 rate was not guaranteed beyond Fall semester due to the unsustainable losses resulting from the worst economic crisis that Lebanon has seen since its civil war.

The president also continuously said that the administration is “doing everything in [its] power” to accommodate students financially while also preserving the University’s academic mission.

The administration has promised to accommodate 60 percent of AUB students financially, but some people believe this is still not enough compensation. Kassem reminds us that “40 percent of students at AUB are still not accommodated for and that is a big number to dismiss.”

Kassem shared concerns over strictly relying on financial aid to secure the future of continuing students, saying it takes away their agency and ability to hold their University accountable.

“This means that we have given the administration more power over the future of continuing AUB students because they will be able to decide how much each student receives in financial aid and may also give the administration a way to hold student protestors accountable for their activism by threatening to remove their financial aid,” she said.

Even with promises of compensation, the administration continuously fails to prioritize student interests and inclusivity in decision-making processes.

Transparency does not translate to mere warnings of a tuition increase before it occurs,” said Kassem. “It requires a respectful exchange with students and a complete and detailed disclosure of financial statements. The administration has failed in both regards and refuses to acknowledge it.

Kassem added that most of AUB’s financial statements had not been sent to the Ministry of Education since 2014.

“The student body must be aware of the decisions that the administration is making, especially as a ‘nonprofit organization’,” said Kassem. “There must be a clear way of communicating how the finances are spent and to involve the elected student representatives in such decisions.”

Kassem questioned whether or not the administration has seriously considered other alternatives, given that there is proof of previous “multiple funding initiatives that require multi-million dollars” and that “the university has a very large endowment.”

According to her and other student activists, cutting the costs of multi-million dollar projects in AUB is among the many different measures that could have been taken to relieve students of the financial burden that comes with a tuition hike.

However, we cannot know the details of such considerations or the dismissal of viable options, or the reality of the exhaustion of options when students are taken for granted, excluded, and ignored in relation to the University’s key affairs.

“The administration holds more power than the students, and sometimes the student body’s interest is not always theirs, and this may disrupt channels of positive communication and the calling for transparency which the student body is asking for,” said Kassem.

When definitions of transparency do not align, the student body finds itself in a relationship of unequal respect and power with the administration.