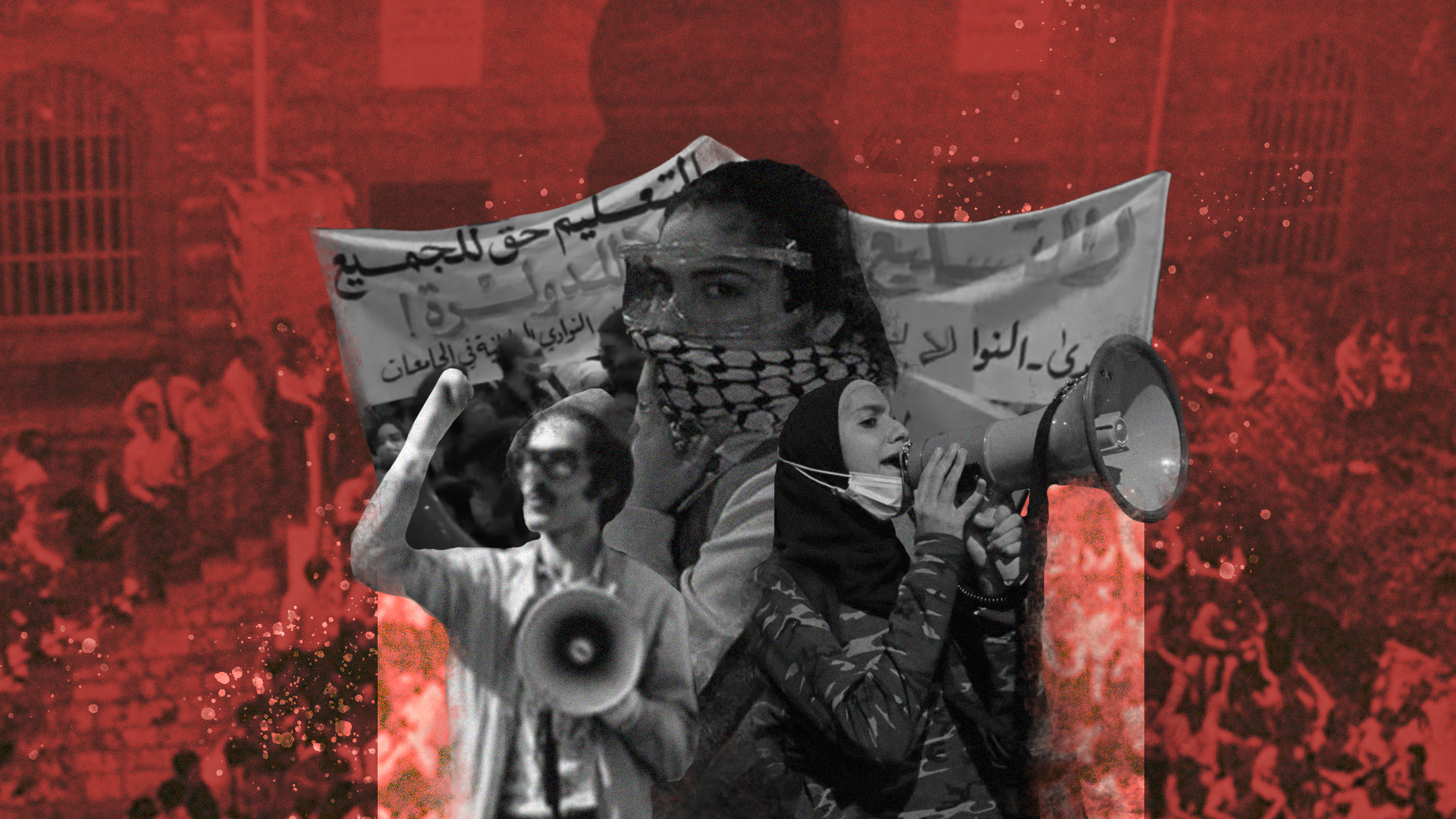 Lebanon’s student movement: Learning from the 70s and moving forward

Since their establishment, both Lebanese public and private universities have reflected internal Lebanese politics and the geo-political scene of the neighboring region.

After a long hiatus, an organized student movement led by seculars and independents in Lebanon has reemerged –reigniting feelings of hope in the midst of a full blown collapse.

On December 19, students from different universities across the country staged a protest in Hamra in response to the recent hike of tuition fees. The administration at the American University of Beirut (AUB) announced it is forcing students to pay their already-exorbitant tuition at an exchange rate of LL 3,900 per US dollar instead of LL 1,515, which paved the way for other universities like the Lebanese American University (LAU) to follow suit.

What began as a peaceful march from AUB to LAU, escalated into a battle between students and both Internal Security Forces (ISF) and Army personnel.

ISF and the army used tear gas and metal batons to confront students who were demanding that both AUB and LAU university administrations revoke their decisions. This incident of police brutality is yet another episode of a series of repression attempts by ruling oligarchs that started with the October 17 uprising.

In the 1970s, Lebanon witnessed what was known as the “strongest” student movement in the country’s history. The dynamic and spirited movement saw the rise of frequent strikes, demonstrations, and occupations.

Reflecting upon these experiences of student insurgency can help us pave the way forward on many levels.

The 1970s movement managed to overcome internal divisions within its ranks, due to the agenda that focused on the student’s demands. In 1971, over 10,000 students occupied every single faculty of the Lebanese University –the country’s only public university to date.

After a long lasting strike, the students in Lebanon achieved what they wanted in the same year: representation and negotiations with the committee of higher education, led by George Saade at the time. These representatives, 6 students, had their first meeting in 1971.

This led to forming the first ever student and professor joint committee, and as a result the forces put together a law proposal within 24 hours.

The law demanded an alteration to LU’s internal rules and regulations, and most importantly the acknowledgment of student participation and decision making in university policies.

Similarly in the same year, AUB students went on strike for a month to protest a 10 percent increase in tuition fees.

In 1974, and after a series of victories for the movement, students issued a referendum to ultimately choose a democratic structure with a union-like approach to activism. This led to widespread political organizing at a student level, reaching more than 50 student unions and coalitions across the country.

In that same year, student protestors stormed the Ministry of Education and Higher Education. Even though they faced major systematic repression efforts from the ruling classes’ army and internal security forces, the students once again achieved their goals: a decree by the Government that allowed funding of the Lebanese public university.

The Lebanese Civil War, which started in 1975, and political maneuvers killed thousands across the country and effectively put an end to the country’s bustling student movement. In 1977, then-Minister of Education Camille Chamoun issued decree 122 and 115 to revoke the rights that gained in years of activism.

Most notably, he nullified the student councils and abolished student participation in university decision-making –slicing democratic values and academic freedoms out of university life.

With over 50 percent of the population living under the poverty line in 2020, the majority of Lebanon’s students cannot afford any increase in tuition.

Their recent stance was against unjust measures taken by universities in the midst of an economic crisis, specifically the dollarization of private university fees –which they fear is the first of many steps that will ultimately bring down an already decaying regime.

AUB President Dr. Fadlo Khoury has cemented AUB’s historic legacy with oppression by yet again raising the bar in regards to coercion. After turning AUB’s medical center into a military zone on July 20 to lay off over 800 workers, he now unleashes brute force both inside and outside AUB’s campus to attack his students.

Even though the context might have changed than that of the 1970s, the enemy remains one and the same. AUB and LAU administrations are no different than the Lebanese regime that has openly declared economic war on the people.

Khoury and recently-appointed LAU President Dr. Michel Mawad resemble the 1 percent and their class interests. They and their administrations are biased towards the oligarchy, and not the students.

They have declared war on every single student in the country and are complicit in the domino effect that will lead to an increase of tuition for every university student. With all of that in mind, we must equip ourselves with knowledge on the history of student activism, and create our own more fitting approach to reclaim our universities.

How to move forward with today’s movement

Considering student led direct action strategies, such as local strikes, that encompass all public and private universities remains essential to today’s movement. This can only be achieved through more efforts of finding shared goals with nationwide student representatives.

Moreover, occupying and reclaiming student spaces are essential in the process of regaining students’ rights. This is not only a symbolic victory, but rather a political message affirming the people’s ownership of all spaces, under a regime that aims to privatize everything owned by the masses.

Learning from the previous experience on a political level stands as another necessity. In the early 70s, the way to overcome the repercussions of geo-political tensions on a student level was difficult. However, an agenda that prioritized student’s rights ultimately paved the way forward in spite of ideological differences.

Today’s student body representatives must emulate yesterday’s approach to organize in a way that encompasses all progressive and independent students. This however should be a temporary transition to a more ideological-based approach, considering the fact that today’s student activism movement is relatively new as it is not a byproduct of the accumulation of knowledge and experiences of the 70s movement.

It is also vital to put things into perspective by separating ourselves from movements that preceded us. It is crucial to move on from romanticizing the older student movements, and forming our own reality, since the hurdles we are facing today are much more challenging than those of the past.