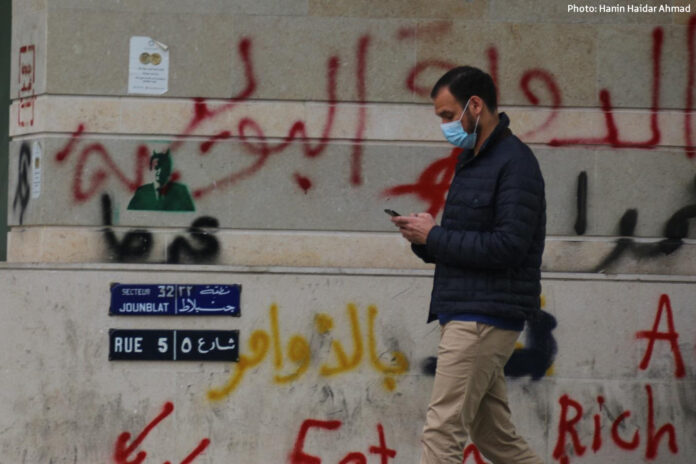 Around two weeks ago, the government-imposed lockdown to contain and limit the spread of coronavirus across the country came to an end, but the high number of cases and infections continues.

“Lebanon is currently still sustaining a high level of COVID-19 cases, the majority of which remain undetected due to insufficient testing and allowing the disease to be so widespread,” said Jade Khalife, health systems practitioner, researcher and the person behind the Independent Lebanese Committee for the Elimination of COVID-19 (ZeroCOVIDLB).

Not long ago, online conversations began to highlight an alternative healthcare plan that aims to limit the spread of coronavirus in Lebanon. The plan was put forth by ZeroCOVIDLB.

Jade Khalife had been advising colleagues within state institutions on the novel coronavirus since the outbreak began in Lebanon. After noticing the insufficient progress made in building a national strategy to fight the virus, Khalife took to social media to connect with like-minded experts on the subject.

In September, Khalife began actively looking for people who would be interested in holding in-depth discussions on how they can help Lebanon recover from the upward-spiking coronavirus curve in the country –both old and new contacts reached out. After their initial meeting, all eight participants agreed on making the outcomes of their discussion official

“…And the overall focus would be encouraging strategic work to counter the outbreak, advising central authorities on best approaches, and also connecting with municipalities and local level organizations for local action” said Khalife.

The team of experts agreed on the need to focus on eliminating COVID in Lebanon, as mitigation capacity is limited due to the vulnerability of the healthcare sector.

Life after the first lockdown

Lebanon confirmed its first ever coronavirus positive case in February and imposed its first lockdown in March, when the country was completely shut down for two weeks. Pictures of empty streets began to circulate, with awareness campaigns on social media and local TV stations rapidly circulating.

See also | Social Distancing: It might be necessary, but it isn’t easy

With the resumption of life after the first lockdown, less and less people kept their commitment to government-imposed regulations, including curfews. Others became critical of the insufficient measures imposed by the government and took to social media to report on violations and share opinions.

“We seem to always lack a post lockdown strategy and a slow return to normal life. I cannot blame the people as it’s the duty of health authorities to do proper awareness campaigning, which has been non-existent compared to the first few weeks of the spread,” said Randi Issa, senior clinical research associate and member of the Zero COVID Lebanon discussion groups. “It also doesn’t help that TV stations give air time to pseudo-scientists and doctors who promote negative propaganda about the virus.”

Cases became exceptionally high after the explosion that rocked Beirut on August 4, leaving hundreds of casualties and thousands injured. Lebanon broke the 1,000-case threshold, officially, in mid-September, a month and a half after thousands of citizens took to the streets to pick up rubble and protest the criminality of the country’s political leaders.

The increasing cases and number of deaths pushed officials to impose a new lockdown in November, all while the economy continued to plummet.

“The lockdown did not have to be perfect (it never is). But if most people abide by it, reasonable measures are made and communicated to the public, then it can succeed in ‘re-setting’ the outbreak. But achievements are temporary, for a couple of weeks, unless this is followed by containment of the disease at low levels,” said Issa.

“We do not want to replicate or do work that other organizations can do, but rather, we want to be a platform for people and organizations to collectively tackle COVID, especially at a local level, but all together coming to form a national success” said Jade Khalife.

While the Zero COVID Lebanon initiative cannot impose precautionary measures, the team has come up with a three-phase plan that authorities, municipalities, organizations and individuals can implement. Developed with effectiveness, sustainability and feasibility in mind, their plan relies on suggestions and studies from different models.

By implementing the different steps proposed by the Zero COVID Lebanon plan, the government will actually be reducing costs: The amounts paid on a one-time basis during a 4-to-6 week full lockdown to those who need compensation is comparatively lower than the costs brought on due to mitigation. According to the initiative’s extensive plan, this can be done by diverting from mitigation to containment and by relying on national and international resources.

“Leadership for this specific crisis should be handled by a dedicated team with multi-disciplinary expertise, meeting daily and coordinated by someone with long-standing experience in complex decision-making,” commented Khalife. “The dilution of responsibilities across different ministries and committees is unacceptable; one clear body is needed to coordinate, and to be held responsible.”

Life during the holiday season

Life has seemingly gone back to normal –or whatever the rate of normalcy is in Lebanon these days–  after the November lockdown. Restaurants, markets, pubs and gyms are back to work with some precautions applied while the airport has been busy greeting expats coming in for the holiday season.

Meanwhile, as Lebanon has refrained from closing off its airport due to economic and political reasons since the break of the pandemic, it has now lifted mandatory PCR testing upon arrival. There is also no mandatory quarantine period.

“It makes no sense to have a lockdown without having effective quarantine and testing for arrivals through the airport and borders. Experiences from various countries have shown that those who have been able to regulate their borders effectively were successful in containing COVID-19. You cannot leave a tap open while trying to empty the sink” said Khalife.

Recently the COVID Committee in Lebanon issued a new statement allowing nightclubs to reopen and allowing gatherings of less than 100 people with some regulations, but according to Randi Issa, the cases in January will definitely be increasing as there is no provision on the implementation of real measures at this stage.

“74 percent of new cases in New York City arose in households and between families,” said Issa. “We need a clear strategy to make people aware that this might put them and their family at risk. They might be losing loved ones after the holidays for the sake of one night.”

And life after the holiday season

The coronavirus pandemic could not have hit Lebanon at a worse time, with the country already drowning in a multitude of political and economic problems. Following the Beirut explosion, many have been left homeless, jobless and hopeless while the economic crisis continues to rid people of their purchasing power.

The surge of coronavirus cases has massively affected the Lebanese health sector, adding yet another black dot in Lebanon’s record book. Lebanon has reported over 1,200 deaths because of COVID-19, and doctors have started to emigrate from the country as a result of the financial crisis.

Dr. Firass Abiad, CEO of the Rafik Hariri University Hospital, told Human Rights Watch that the Lebanese state owes his public hospital –which is spearheading the fight against COVID-19– around 20 billion Lebanese liras for 2020 alone.

According to a statement by caretaker Health Minister Hamad Hasan, Lebanon will be one of the first countries to import the Pfizer-BioNTech vaccine –which will arrive in the country sometime in mid or late February. Lebanon will also be receiving  a variety of vaccines from Covax, including the Oxford-AstraZeneca jab at a later stage.

Today, Hasan told Reuters that the government is set to sign the $18 million deal for the Pfizer vaccine this week.

The agreement with the American pharmaceutical company Pfizer secures coverage to 15 percent of the population, while the deal with Covax will cover another 20 percent of people. The Pfizer vaccine has caused some controversy in Lebanon, since it became known that the vaccine has specific storage requirements that the country might not be able to meet.

“Other vaccines would be easier to manage but it is still at this time regarding availability,” said Khalife. “In all cases, Lebanon will not have sufficient vaccines to reach herd immunity for many months, if at all in 2021.”

While his view might seem negative, it offers a realistic outlook into Lebanon’s healthcare system and its capabilities given the number of increasing COVID-19 cases.

At-risk individuals and those over 60 are a top priority for the vaccine so far, according to official sources, but Khalife says how the vaccination will be distributed poses yet another concern. A lot of uncertainty surrounding the distribution process still exists, including whether or not children and people with certain conditions should receive it. Khalife thinks the vaccine should be national and inclusive of all communities.

The Zero Covid Lebanon strategy seems like Lebanon’s last resort at saving the healthcare system and citizens alike, especially during these uncertain times the country is passing through. But as the holidays approach, expats come in and life resumes, it only seems like we are headed towards yet another catastrophe.

“The virus is still widely spreading in our community and this will only increase with the holidays as I don’t see any proper measures being implemented” said Issa.