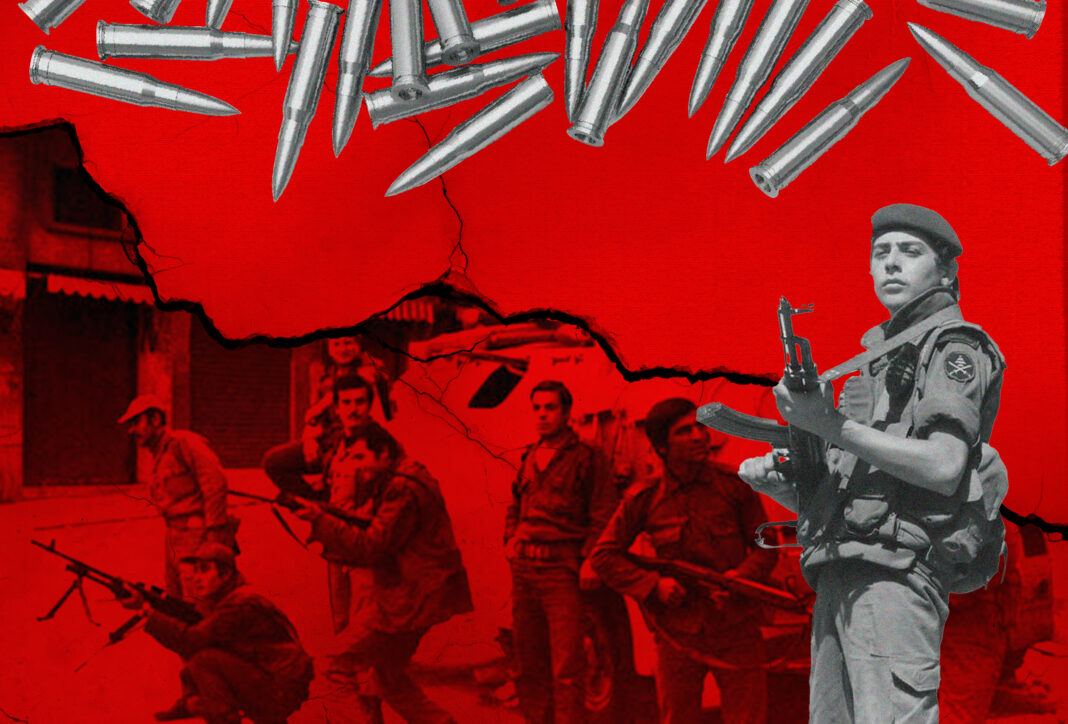 On October 22, Saad Hariri was named Prime Minister –accordingly, he was assigned the task of forming a cabinet primarily based on partisan accommodations, breaking the year-long routine of supposedly “independent” and “technocratic” formations.

Although sometimes perceived to be the “only way forward,” members of the political class knew very well that the crisis-inducing model they are now reproducing one year after October 17 and a few months after the August 4 explosion cannot end well.

The latest developments corroborate that sentiment. While the country witnessed a political and transformative breakthrough within university campuses in the pursuit of a secular and just Lebanon, a divisive discourse and thirst for partition have resurfaced in conversations between ruling elites and their supporting bases.

To elaborate further on this phenomenon, leaning towards a “Christian-Muslim” strife over power, representation, and material gain, a few topics are to be highlighted: the cabinet deadlock, the forensic audit of the Central Bank, modifications to the electoral law, the rise of fascism and anti-refugee sentiment in Bcharre, and bigoted accusations utilized during the USJ university elections.

From Hariri to Bcharre: A narration

Since Hariri took office, a rhetoric revolving around “reform” and “crisis-management” was utilized to persuade a growingly frustrated population that sectarian accommodation mixed with a “will for reform” could as well be the remedy for the current economic and health disaster facing the country.

Adopting the discourse of the street, media and official statements discussed two primary conversations or topics: holding the Central Bank and its governor accountable, and reforming the electoral law in preparation for the next parliamentary elections. Following the uprising, specific political actors were keen to openly defend the interests of banking executives and shareholders, and by extension, Riad Salameh.

These actors primarily include but are not restricted to: Nabih Berri and Saad Hariri. Amusingly enough, this has led to Amal-affiliated Finance Minister Ghazi Wazni claiming that Kroll, a company which was formerly meant to oversee the forensic audit of the Central Bank, had Israeli ties.

Meanwhile, the Free Patriotic Movement has been “demanding” that the forensic audit be implemented since November –ironically, its MP Ibrahim Kanaan, who is the head of the Finance and Budget Committee, has been delaying any structural and systemic solution to the banking sector and has reportedly delayed a comprehensive forensic audit of the Central Bank’s balance sheets.

The contentious discussion over the forensic audit happened in parallel to that of the electoral law, which has taken an overtly sectarian dimension, adding more fire to the already heated cabinet deadlock.

Following a symbolic proposal by Amal Movement MPs to unify Lebanon’s electoral districts into one district alongside a proportional system, both the Lebanese Forces and the Free Patriotic Movement claimed this was a dangerous attempt at reducing Christian representation.

Accordingly, prior to the restructuring consultancy firm Alvarez and Marsal’s confirmed withdrawal from auditing the Central Bank’s accounts, the Lebanese Forces and Free Patriotic Movement launched a campaign condemning the Amal Movement and the Future Movement for stalling the process to implement the auditing process, especially as Wazi proceeded to extend the deadline before which the Central Bank can provide the data to the firm.

Consequently, one partisan contention over the electoral law mechanically reduced any other (immensely concerning) topic to the same form of dispute –one based on a sectarian, federalist, and regionalist flavor.

The issues didn’t end with the higher ends of governance, but coincidently (or cleverly?) reflected a few days after in Bcharre, specifically after LF MP Sethrida Geagea formally requested that all residences of Syrian refugees in the area be inspected following an individual and isolated murder.

In the midst of the sectarian ruckus going about in high-end realms of government, some enquire about the concrete and material remedies inspired by the revolutionary upheaval which occurred a year ago.

While the sense of a persistent status quo is dominant, the most important change that surely cannot go unnoticed is the increase in political awareness and curiosity amongst youth. For instance, in the AUB student elections, not one single list or candidate publicly announced that they were running in the name of a certain political party.

All candidates ran, at least rhetorically, as “independents” (despite accusations that some were still backed by their previous affiliations), which makes it safe to say that people in Lebanon no longer pride themselves in their leaders as much as they used to. Up to a certain extent, they are even ashamed of it.

On the other hand, the situation at the St. Joseph University is quite different during this election season. Students still find themselves facing direct situations of sectarian discrimination and bigotry.

“I’m speaking to you from one LF (Lebanese Forces) supporter to another, we can’t let the Muslims win.”

These phrases were reiterated by candidates to potential voters to sway them away from voting for independent or secular candidates.

“LF supporters would use Shia as a synonym for Hezbollah, and consequently focused on fear of Hezbollah’s weapons to bait voters away from candidates with independent, diverse and secular political backgrounds,” said Yara Idriss, a third year clinical psychology student.

This rhetoric was also broadcasted on the nightly news forecast on MTV a week before elections, a rumor based on false claims to smear the USJ Secular Club’s Taleb campaign as one that is apologetic to or even supportive of Shi’a Islamist militant group Hezbollah.

Nazem Khatib, a fourth year student in the faculty of engineering, says that the sectarian parties are using personal and invalid attacks to undermine the secular movement on campus.

“Despite being a pluralist movement, we aren’t solely being classified as leftist, but also as a communist group,” he said.

“And all these claims are being made without any concrete proof or evidence. They are simply phrases being thrown around between candidates and voters to defame the independent lists,” he continued.

It’s worth-noting that the terms leftist or “communist,” particular within communities sympathetic to the Lebanese Forces, are often reminiscent of dichotomies prevalent during the civil war period when Muslim-Christian conflicts were sometimes masked as Left-Right schisms.

While sectarian divisiveness is in the air, it is also unsustainable primarily due to the fact that our leaders can often benefit when united against an increasingly rebellious population.

In the past few days, most sectarian political parties from different sides of the spectrum openly announced their opposition to continuing subsidies. This comes after their collective –and successful– attempt to bring down the forensic audit within the parliamentary finance committee.

Nevertheless, a subsequent byproduct of these policies is an increase in overall disillusionment with sect-based politics, as evidently suggested by the student election results in AUB, LAU, RHU, and USJ.

The bigger and grander question relates to ways in which these student formations can unify into something bigger, clearer, and more ambitious in a political sense. Only then can mere campus victories build up a momentum paving the way towards the nearest parliamentary election, which will certainly not shy away from the same sectarian divisiveness we’ve witnessed in the past two weeks.

Ghassan Mogharbel - February 26, 2021 0
"We are convinced, after legal consultations with the team of lawyers helping us, that setting the tuition at the LBP 3,900 rate is not legal."

Maria Aftimos - February 25, 2021 0
Brzezinski’s analysis provides a geopolitical base to explain the UAE-Bahrain-Israel normalization deal through a historical lens.

Lynn Sheikh Moussa - February 24, 2021 0
Lebanese members of Parliament skipped the queue to get vaccinated, violating the terms of the national COVID-19 plan.

Murdering women: A look at Lebanon’s surge in gender-based violence

Hanin Haidar Ahmad - February 23, 2021 0
We talk to Fe-Male's Alia Awada about how the COVID-19 lockdown plan fails to protect women and girls in Lebanon.

Lynn Sheikh Moussa - February 22, 2021 0
Lebanon’s Military Court has charged at least six protestors from Tripoli with terrorism and theft, as per a statement by lawyer Ayman Raad.  A live...