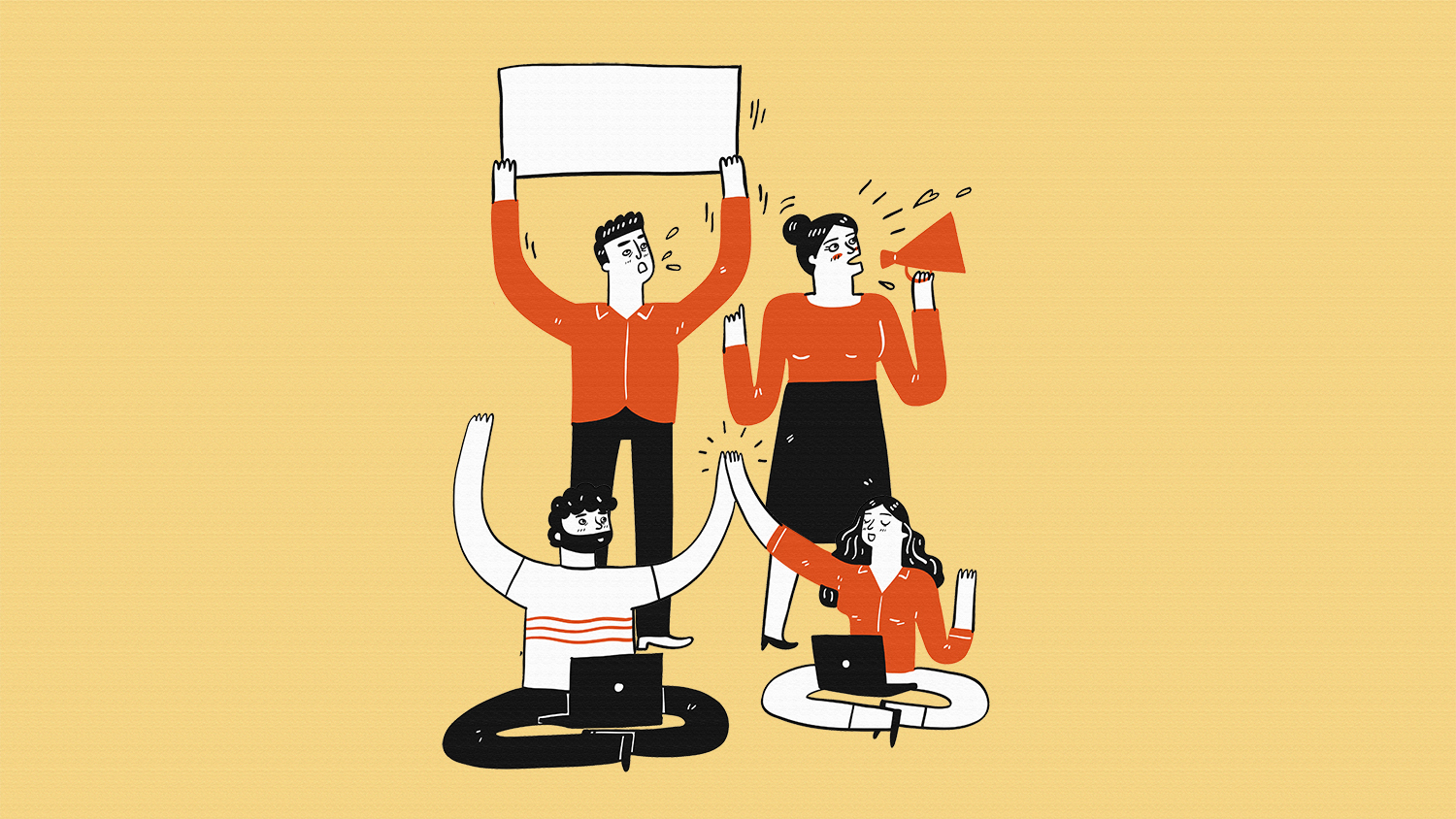 October 17: From activism to slacktivism

Slacktivism
(/ˈslaktɪvɪz(ə)m/)
Activity that uses the internet to support political or social causes in a way that does not need much effort, for example creating or signing online petitions.

Does this description sound familiar to you? The Cambridge Dictionary definition is not far from reality. Slacktivism has become a trend, even more so with the emergence of the COVID-19 pandemic, which has pushed protestors and activists to shy away from the streets and resort to digital activism.

The collocation of the words that make up “activism” is ironic, isn’t it? Being an activist, while slacking. What it typically means today is liking someone’s hopeful Facebook post, sharing a petition on Whatsapp groups and retweeting “for a cause” on Twitter. In Lebanon, the October 17 revolution has had its fair share of slacktivism.

On October 17, 2019, people from all over Lebanon began to gather in Beirut’s Riad El Solh Square in Downtown after a series of unfortunate events –ending with a $6 tax on Whatsapp–  pushed them to protest the status quo and demand a change in the regime.

The accumulation of governmental failures was no longer bearable and the country was on the brink of collapse. Protestors remained on the streets for months, chanting against the regime, holding discussions in Azarieh and targeting different politicians wherever they were located.

Calls to move to the street remained organic for the first few months, with people mainly tweeting or posting status updates on Facebook of where they were protesting while some prominent civil society groups that had already, at this point, existed, supported the calls by sharing visual representations on their social media pages as well.

People relied on independent journalists and sometimes traditional media outlets to get updates about where to go and what was happening. The general atmosphere of the protest movements was organic and didn’t heavily rely on social media use.

The shift towards slacktivism began before the lockdown

A monopoly over the movements through social media began soon after. As more and more groups on-ground and on Whatsapp started to emerge, each started to circulate their own visuals and calls for their own protests and marches.

This was the start of slacktivism in the October 17 revolution, even before the pandemic forced the country to shut down and the protestors to remain in lockdown.

Activism has since become harder.

Slowly, people became reliant on their groups to represent them on the street, and would be satisfied sharing a few tweets or stories every once in a while rather than physically being on the ground.

At this point, and after only a few months, people began to slowly delve back into their routines.

The momentum of the October 17 revolution began to take a hit once the government-imposed regulations for the coronavirus pandemic began.

The coronavirus pandemic has forced the globe to create a shift, even in daily tasks. Schools and universities alike are resorting to online classes as semesters resume. Meanwhile, some businesses are allowing employees to work in rotation or remotely.

Activism has since become harder. During Lebanon’s first two weeks of full lockdown, many groups began preparing and sharing supportive videos as a reminder that the momentum has not died down and that they will be back on the streets soon.

Activists and groups even started podcasts or series of short episodes by going live on social media platforms to discuss the current situation. More and more messages began circulating on Whatsapp and other platforms, while fake news was at its peak.

On the other end of the spectrum, many lost hope in positive political change ever becoming a reality and opted out of supporting the protests altogether.

Ground movements resumed, but they weren’t the same

Slowly, people were getting ready to come out of lockdown and back to the streets again. This started with small car rallies around Beirut, making stops at different politicians’ houses to leave powerful messages asking for their resignation.

Videos and other types of digital content have since been massively circulating on social media platforms to raise awareness, whereas digital campaigns with certain hashtags have become popular on Twitter and Instagram.

Soon after, ground movements resumed, some at the palace of justice in support of people under interrogation and others in local squares or at politicians’ houses. The impact of the coronavirus pandemic was visible on ground, as people had become even more reliant than before on digital activism –more people were viewing stories on Instagram and Facebook, and sharing calls to protest than actually attending.

On the popular revolution page, Thawramap, the issue was highlighted several times by pointing out the number of times a story promoting a call to protest had been viewed as opposed to the number of people who actually showed up.

Slacktivism had, unfortunately, started to creep its way into the lines of revolutionaries after February and reached its peak during the pandemic. Some people were trying to regulate their routines and fall back into them, and others had concerns being in crowded places. Both relied on digital activism as an alternative.

The petitions covered topics the general public had reached a consensus regarding and other topics that were still controversial such as pleading French president Emmanual Macron for help and the implementation of UN resolution 1559, pertaining to the withdrawal of foreign forces from Lebanese land.

Twitter polls also became popular during and after the pandemic, where different prominent figures and independent journalists would survey public opinion by creating polls around certain topics.

On Instagram, some pages gained popularity due to their engaging content, which they used to their advantage to also survey people’s opinions on different issues, including current events and protective procedures against the Coronavirus pandemic.

Some active figures of the revolution had even been called in for interviews either by newly created podcasts, independent media outlets or to appear on TV interviews with local media outlets.

Many active, independent, political groups had taken this time to strengthen their presence online by sharing more content about their solidarity with the people as well as their reformative plans and awareness videos.

After the explosion at the Beirut port on August 4, slacktivism continued to be a prominent factor in the fight for rights. While many were affected, and others unable to help, only some had the strength to be back on the street.

From that perspective, even slacktivism has become difficult.

Despite the emotional, and in many cases physical, unreadiness to head back, tens of thousands of people from all over Lebanon joined forces to protest in anger against the injustice that had taken place on August 4, 2020.

Lebanon’s model of slacktivism reflects the reliance on social media in other countries as well. During the past year, many revolutions in different countries including Iraq, Iran, Hong Kong and the United States had broken out, many of which had to rely heavily on online activism as a form of expression due to lockdown and government oppression of protestors.

Oppression, in Lebanon in particular, has become even more prevalent with different activists and figures being called into interrogation every few weeks for vandalism or for the confrontation of politicians, and mainly for online expression. From that perspective, even slacktivism has become difficult.

Many social media platforms are monitored, while many “fake” accounts engage in conversations to prompt slander and defamation which could lead to legal procedures. Not only so, but some political followers have even gone as far as sending out fabricated calls to protest and petitions.

While it can definitely have some upsides, slacktivism alone does not suffice. It’s a start, to say the least, but should be accompanied with powerful political campaigning and movements on the ground.

Achieving real change is two-fold: Civil groups and activists need to raise awareness and share appealing content in a manner that excites users beyond a like and a tweet, while the general public needs to be ready to put in the effort to advocate change beyond the screen.