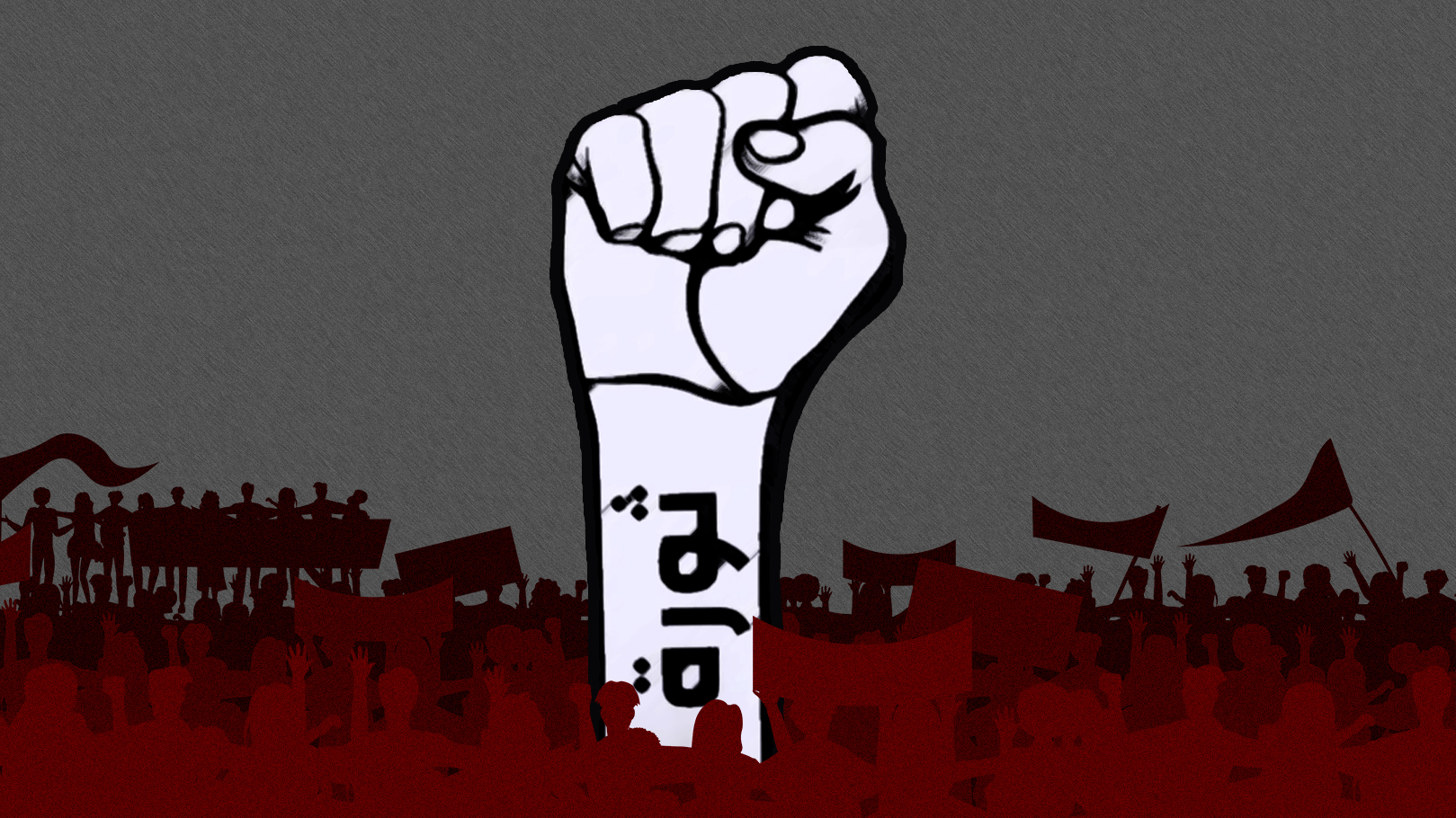 The turning point: On October 17 and what came after

As hard as I try, I can’t get myself to remember what I was doing on October 17, 2019. What I do know is that earlier that day, I had booked a follow-up session with a psychiatrist I had visited the year before. I did not get to attend that appointment.

I spent the rest of my night glued to the TV, not fully comprehending what was happening. The protesters burst out in anger and frustration on screen, fueling both my excitement about the events and my anger about my mother not wanting me to be there.

I spent the days after October 17 on the streets. For the first few days, my parents would accompany me during the day and I would stay and meet up with friends at night. Up until November or early December, it was just me and friends listening to talks and helping out with donation campaigns during the day, and chanting our lungs out at night.

Soon after, it was just me. Life has completely shifted since. The street slowly started to lose momentum. People grew tired, lost hope and started to focus more on their personal lives and wellbeing in the middle of Lebanon’s economic crisis.

Being on-ground without company didn’t bother me. In the end, we went to the street to protest injustice and not as part of a social event. It allowed me to observe my surroundings, understand what’s happening, listen to conversations and meet different people –some are wonderful souls whom I later befriended and others, not so much.

Those of us left endured a lot: teargas, water cannons, rubber and live bullets, having our cars smashed to bits and pieces, demotivation, bad weather, and failed attempts, among other things. I remained until July 25. That, for me, was a turning point.

Some on-ground movements had turned into casual social gatherings at this point. It was just a bunch of group members catching up in an organized march or in-between chants at a protest, which for the most part wasn’t all that bad until it became a sad routine.

Movements organized by the more left-leaning members of civil society were sometimes more ambitious, from what I observed, but failed to gain traction.

On July 25, 2020, we headed to the World Bank headquarters in Downtown to protest the building of a dam in Bisri. It was no surprise that very few people joined –those of us remaining on the ground were used to this by now.

When I got there, someone was giving a statement to the media that went on and on, and then someone else gave another statement that also dragged on. After that, some posed for pictures while others engaged in chitchats. I looked around me and felt as though I had been at a casual gathering.

A group of activists stood in one corner alongside Roland Nassour and Amani Beaini from the Save Bisri campaign, in the middle of a constructive dialogue on raising awareness about alternatives and answering questions on the issue. The turnout was little, and most people were still busy posing for the camera and having side conversations.

After that day, few protests, if one could even call them that anymore, were organized. I did not attend. As a lone observer, I had spent the months after February noticing the decrease in numbers.

I had asked people why they stopped showing up and what would urge them to start coming back, I tried to use my social media platforms for awareness. I had even tried to get in contact with civil society groups to share my concerns. It was all futile.

At many instances after the new year, different civil society groups –those born from the October 17 revolution and those that preceded it –tried to form some kind of alliance that would give people hope and show them that “in unity, there is strength.”

The main aim behind them was to organize ground action and political work under the same umbrella, but at all these instances, the alliances barely saw the light.

“The moment the light dimmed on these alliances, that small spark of hope began to dissipate once again.”

On-the-ground groups tried to align and work together several times, but their plans for unity have not been successful yet, given the number of people left on the street today.

Two major alliances have been discussed, one of which is called Al Moubadara: Drabzeen and the other, Al Jabha Al Madaniye.

The former was announced on social media on August 18 but has not presented anything substantial yet. The latter was announced at an August 30 event in Downtown Beirut, where representatives of the alliance gave statements and announced their political agenda to traditional media. The alliance has been silent since then.

Both alliances include different political groups from within civil society, including LiHaqqi, Beirut Madinati, Citizens in a State, and other up-and-coming groups that have gained traction and popularity since the break of the revolution –like Minteshreen and Maseeret Watan.

Seeing big names work under one scope inspires hope that there are people who are actively working towards change. Unfortunately, the moment the light dimmed on these alliances, that small spark of hope began to dissipate once again.

For the past several years, civil society groups have been trying to align under one umbrella, each clutching to their own beliefs and refusing to compromise to reach a middle ground.

Today, we are at a pivotal point. Many people are choosing to throw themselves at sea, apply abroad as immigrants and sell their souls to make a living because they do not see any hope of an alternative stemming from their own society to replace the corrupt political class.

A lot has changed in the last year. What started as a rush to the streets in anger, anticipation and excitement to ask for basic rights turned into a divided political game. Of course, the most drastic change happened after the August 4 explosion at the Beirut port.

On August 8, there was a planned move in Downtown to condemn what the officials had done to us. What was supposed to be a day of anger turned into a day of horror.

I was lending a hand in Mar Mikhael when, at around 3 pm, a notification popped up on my phone saying that teargas had been dispersed in Riad El Solh. I had not planned to go there before 4 pm.

When I did get there, the stand-off between the protestors and the army had already started. Teargas was thrown at us from every entrance. Many families with children were present.

At some point, beside me, there was a woman with a crying toddler trying to figure out how to leave. To my other side, I saw a friend wounded by rubber bullets and bleeding on that same sidewalk.

I ran further towards the square to get a better grip of what was happening but there was nothing to see, only clouds of white smoke.

I went back for two days after that night, only to see the number of people there lessen and the mechanics become more violent. There were specific groups of people actively throwing rocks at army men to incite a standoff, afterwhich we’d get showered with teargas and sometimes rubber bullets.

This had been happening for months before. Many of us were used to this and knew how ineffective these tactics were.

After that, the ground went silent again, save for a few movements every now and again.

The Plan and Moving Forward

People are no longer hopeful, instead the majority are demotivated. The million Lebanese who hit the streets in October have now been reduced to a few thousands, sometimes even hundreds, and need reassurance that an alternative political plan actually exists.

“But many of these disparities are there for a reason.”

While some civil society movements are not wasting time proving themselves, others still fail to see the bigger picture, making collaborations even harder.

There remains to be many disparities among these groups, especially when it comes to economic policies, stance on weapons, foreign policies, early elections and where they center themselves.

But many of these disparities are there for a reason, maybe even as a sign that these groups don’t always have to see eye-to-eye on all the above mentioned points to make change possible. Maybe, they just need to learn from the mistakes of the past few years rather than force an alliance that keeps failing to happen.

In parallel, a new alliance is actively being worked on to be announced soon.

While this is being cooked, some members of parliament who label themselves as “opposition” have also been busy at work along with a few civil society groups. They’re trying to implement a transitional plan that leads to elections through establishing a political front with a joint program based on the need for confrontation from outside the system itself.

Citizens in a State, which believes in peaceful negotiations as a form of advancement, previously discussed this method. The group considered working with Lebanese politician Chamel Roukouz, but the move itself and later on the party received significant backlash.

Current works look promising for some, while some might be indifferent as daily life challenges increase. But as long as we have people investing their capabilities into political work, change is inevitable.