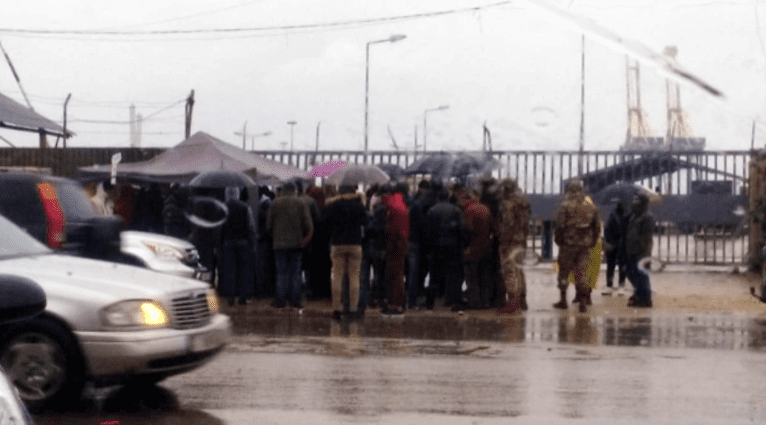 Protesters Thursday shuttered Lebanon’s two main ports in Beirut and Tripoli while also blocking roughly a dozen state institutions and public utilities across the country that they see as corrupt and inefficient.

A few dozen protesters gathered outside the entrance to the headquarters of Lebanese Customs at the Port of Beirut in the early morning hours of Thursday, in opposition to what they see as rampant corruption in the port’s management. “It’s Ali Baba’s cave, we’ve come to Ali Baba’s cave,” one protester said, standing with a group huddled under umbrellas, as rain fell.

Dozens also blocked the entrance to northern Tripoli’s port, demanding it be “cleansed of corrupt people,” the state-run National News Agency reported. Protesters set up a tent in front of the main entrance to the port, asserting their presence while work continued as normal inside, according to the NNA.

Protesters in Tripoli also headed along a regular protest route in the city from the Kadisha Electricity Company, to state-run internet provider Ogero and the North Lebanon Water Authority, all public utilities they say provide poor services.

In Northern Akkar’s Halba, one of the most persistent protest sites, demonstrators headed to a dizzying array of public utilities including the local water company, a branch of the finance ministry, a center affiliated with the Labor Ministry, Ogero, a technical and vocational training center and a local office of state-run Electrcite du Liban.

Meanwhile chaotic scenes continued at banks across the country over the increasingly restrictive informal capital control measures that have been imposed on depositors for the past two months.

Security Forces beat and pushed several dozen people as they tried to enter a branch of Credit Libanais in southern Sidon, according to a video shared on Twitter.

In a video from southern Nabatieh shared on social media, depositors complained that the bank was charging $3 for every $300 dollars that people sought to withdraw –effectively charging people for taking out their own money.

After dozens gathered demanding their money, the bank closed its doors with some customers still inside. “No one leaves until we get our money,” one woman said.

Another video from the scene showed a woman wiping away tears as she stood waiting inside the bank, before being hugged by another woman. In another video from a FransaBank branch, reportedly in Beirut’s Ras al-Nabaa district, a man says that he has locked the bank’s doors after employees refused to pay out any dollars at all.

Activists have planned a protest in front of FransaBank’s main branch in Beirut’s Hamra district at 10:30 a.m. on Friday.

Banks across the country have increasingly become the scene of tense exchanges between depositors and bank employees, who have been told to restrict the access of depositors to their funds.

Protesters have carried out demonstrations in which they have pressured bank employees to pay out dollar sums greater than the roughly $200 that has become the norm at many banks.

Lebanon’s union of bank employees Thursday threatened to launch a renewed strike if security forces fail to protect staff from “organized attacks by people who claim to represent the popular movement.”