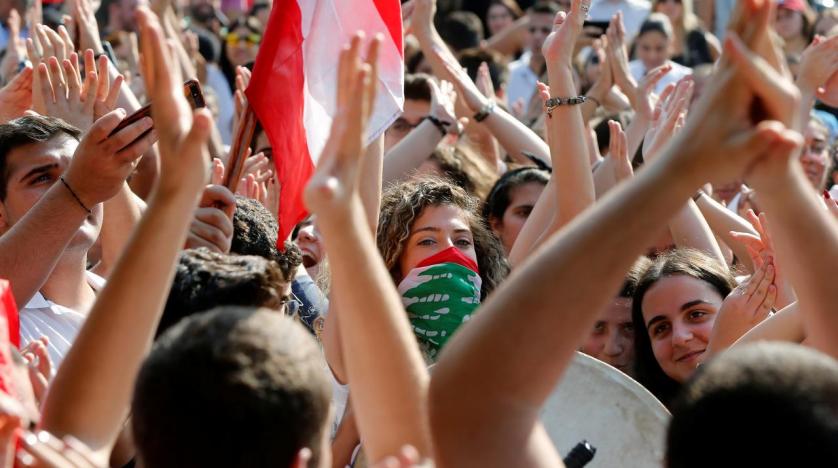 Feminism and the October Revolution: The people demand and do not negotiate

Marching to the sounds of drumbeats and chants, women, migrant workers, students, members of the LGBTQ+ community, and allies in Lebanon shook the streets on November 3 as part of the Feminist March from the National Museum to Riad El Solh.

With more than 500 people, the march represented a culmination of feminist efforts from the past years, through which feminist groups have firmly asserted their presence within Lebanon’s October Revolution and the overall political scene. It was undeniably a revolutionary effort, one that does not seek reforms from the authorities in power but demands the downfall of the patriarchal and sectarian regime.

“The people demand and do not negotiate,” chanted those marching, making it clear that there would be no room for any further negotiations on their rights and demands because authorities have failed them beyond measure.

Feminist groups have been relentlessly contributing to the efforts against patriarchal institutions, their abusive discriminatory behaviors and all forms of exploitation against vulnerable communities in Lebanon.

Their work is intersectional in nature, taking on causes such as the Kafala system, the systematic abuse of refugees, the harassment and discrimination faced by members of the LGBTQ+ community, among many other struggles that receive just as much priority. Their inclusive and intersectional politics, both preached and practiced, have allowed for the creation of safe spaces for these communities whose goal is to provide solidarity and empowerment.

Feminist currents and the link to the sectarian system

It comes as no surprise that proponents and supporters of the movement are present and seen leading people in the squares, from creating chants and banners against the corrupt elite, to organizing discussions on feminist politics and economic justice.

Such actions serve to erase the notion that the roles of women in the revolution should be confined to “human shields” against police brutality, or as “nurturers” of the protests, a rising popular concept. These allegedly empowering concepts only serve to reduce women to the typical gender roles they aim to break away from.This popular women’s rights current has been gaining traction during the uprising, and while elevating women’s rights and place within the changing political and social scene is essential, it is worthwhile to note that certain naive narratives can be harmful and detrimental to the cause itself.

When women are framed as “nurturers, healers and community builders”, or are called out to as the “daughters, sisters and mothers” of the revolution, this contributes to the reductionist framing of women as solely that. The goal of feminist struggles has always been to push beyond those traditional boundaries and perceptions.

With these currents forming and consolidating themselves within the protests, it becomes all the more necessary to oppose any attempt at brushing away feminist causes because “there are more important things to worry about,” a sentence many feminists have heard far too often throughout their struggles.

The ceiling of acceptable discourse and demands should include feminist goals, since it has been proven time and again that the sectarian system that plenty aspire to bring down is intricately linked with the patriarchal system that has destroyed lives and futures.

This is true of the many institutions and legislations of the regime. Take personal status laws for instance, which are nothing but the embodiment of the pact between sectarianism and sexism. This institution has routinely abused and deprived women of their rights to divorce, protection from domestic abuse and rape, from receiving custody of their children and undergoing fair trials, purely on the basis of sectarian belonging and the religious court they answer to.

It deems women guilty until proven innocent, no matter the case, and unfairly determines the legal status and standing of women according to their sect. Women are therefore not equal in terms of legal standing before the law. This reaffirms the fact that the sectarian system inherently enables the patriarchy, and vice versa, through religious courts for one, and through multiple other discriminatory institutions and legislations.

Reclaiming the streets and raising voices

Sexual harassment and assault remain a major source of worry and anxiety for women and non-conforming individuals, even during the protests

Unfortunately, sexual harassment and assault remain a major source of worry and anxiety for women and non-conforming individuals, even during the protests. Reports and videos of men harassing women in the crowds and crudely invading their spaces have made many wary of participating in the protests as freely as they hoped they could.

However, people have not been silent on these issues. Harassers have been named and shamed, sexist and harmful behaviors denounced and condemned, and social accountability has been maintained, to the best of the people’s ability.While the relegation and confinement of women to the private realm is now considered an outdated idea by many, Lebanese laws still do not ensure the safety of women and vulnerable groups within public spaces.

Our legal system remains willfully unjust to victims of harassment and sexual assault; there is currently nothing within any legal code that holds harassers accountable. Despite the fact that some efforts have been made in parliament to pass laws that protect against sexual harassment, , no such laws have ever been approved by the parliament due to political deadlocks.

Pushing for reforms within a broken and uncompromising government has proven to be a waste of effort because of the very nature of the sectarian system that insists on upholding patriarchal social norms to further its benefits. The main players within the current regime operate only and exclusively for their own interests, and when these interests clash –which is most of the time– any chance at reform becomes utterly obsolete.

This is what feminists and other political groups have understood and have begun to act upon. Empty promises to reform and adjust matters will not convince them anymore. They will continue to assert their undeniable presence not only on the streets, but within public life and the upcoming political transformations.