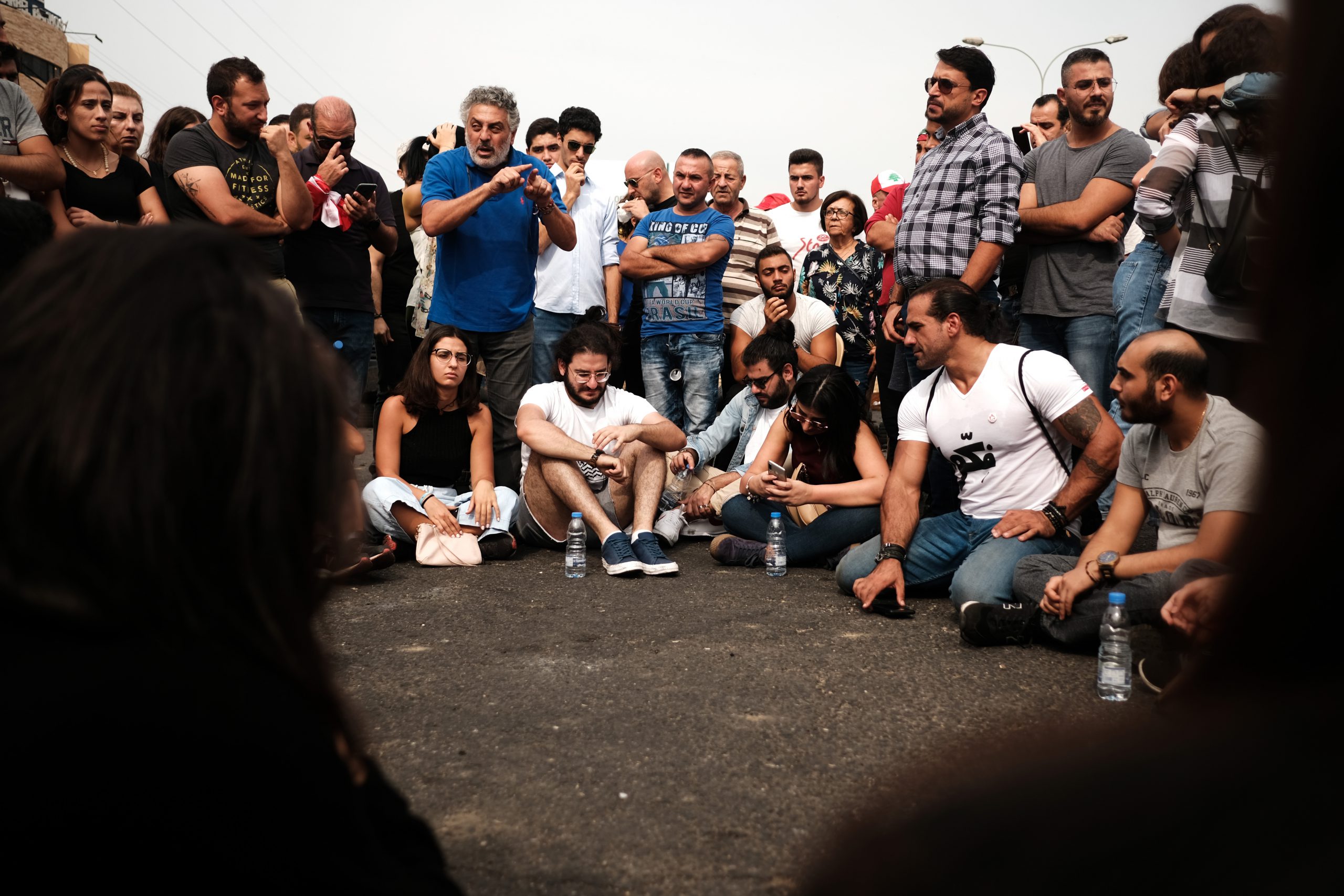 During the protests, several university professors gave their classes on the streets. Here, Dr. Sharif Abdunnur gives an open class lecture and discussion on the importance of a technocratic government, in the middle of the Jbeil highway. (Eva Mahfouz)
Home
Economy

The protesters want to end the sectarian system: Our future economy should cater to their demands

Ongoing protests have brought the country to a standstill since October 17. People took to the streets to demand the “fall of the regime” and the overhaul of the political status quo. This political class was not only deemed as excessively corrupt by protesters, but a remnant of a costly 15-year civil war, the end of which eventually brought the various opposing warlords and rich businessmen to power.

Prior to the mass demonstrations, austerity measures, taxes and a looming currency crisis created an environment of frustration amongst citizens. Economic hardships were being felt, and people became increasingly dissatisfied with the performance of the current political class and its “national unity” government. The proposed WhatsApp tax was the tipping point that eventually brought the people to the streets and sparked what is being named the “October Revolution.”

The mass protests, fueled by the recent hardships, presented two main economic demands. The first one pertains to curbing corruption and reclaiming stolen money. Corruption in recent years was seen as one of the main reasons for the difficult economic situation, and the main talking point in terms of proposed reforms from both the ruling parties and popular opposition.

The second demand was to increase the provision of public goods, and as such an end to austerity. Protesters denounced the lack of basic public utilities, be it electricity, water, or waste disposal, and relatively nonexistent public education, healthcare and transportation. Cuts to military retirees’ pensions and Lebanese University professors’ salaries also sparked outrage and protests months before the revolution.

These demands cannot in any way be dissociated from the failure of the current political system to build an economy that works for its people. The sight of massive, decentralized and cross-sectarian protests across the country since the start of the revolution confirms that the post war sectarian system was an economic failure.

Protesters demanding the “fall of the regime” also shows the dissatisfaction of the population with the current system. Identifying and remedying the drawbacks of such a system should thus be the basis upon which we build our post-revolution economy, one that satisfies the needs of its citizens.

The post-war sectarian system and corruption

The sectarian system, which could not prevent the 1975–1990 civil war, was kept in place in the post-war period, albeit somewhat restructured with the Taif agreement in 1989. The system was introduced under the assumption that it would preserve the political rights of every sect and maintain peace by means of adopting proportional sectarian quotas in top public offices.

But accommodating for sectarian interests in a country with 18 sects meant a large number of stakeholders had to be included in the decision-making process: parliaments in the post-Taif period included 128 parliamentary seats, considered a relatively large number relative to the local population, with governments generally comprising of 30 ministers.

The high number of politicians made corruption easier, less costly and subject to increasing returns: The greater the number of politicians engaging in corrupt behavior, the lower the probability they will be caught, and the more they could embezzle public funds. With governments also including a large number of ministers, additional unavailing ministries had to be created, thus increasing wasteful spending and making corruption easier.

The rules of the game set by the sectarian system also meant that politicians seeking to be elected faced fierce competition for votes, especially with electoral laws favoring small electoral districts. Thus, politicians became compelled to create large clientelist networks in order to get elected, and as competition over votes was strong, corruption became self-generating and self-sustaining: If one politician provided resources to one citizen, another one had to do the same for fear of losing political support.

The post-war sectarian system, the provision of the public good and living conditions

Corruption and the formation of large clientelist networks in the post war period drastically changed the relationship between elected representatives and their constituents. Politicians’ roles shifted from reasoned policymaking to sustaining their patronage networks.

Ironically, public goods were provided through private and illicit means. For example, politicians would cover health care or education expenditures of some citizens in return for political allegiance, usually using public funds.

Thus, politicians have no incentive to provide the public good through public means. Doing so would free their constituents from conditioned political allegiance and disintegrate their clientelist networks. The sectarian system can therefore only be conducive to an equilibrium, where the public good is under-provided.

The under-provision of the public good can partly explain the massive inequalities and poverty in the country. In 2017, the richest two percent of the population owned as much wealth as the bottom 60 percent according to UNDP estimates and 28.5 percent of Lebanese people are estimated to live in poverty in 2018. These living conditions are the product of the economic model that the sectarian system generated, and cannot be remedied without its abolition.

One of the main economic problems the post-war sectarian system created, was its inability to conduct anything resembling any form of economic policy. Government budgets were rarely finished on time, and few were the instances where one could feel that the executive and legislative powers were conducting any form of fiscal policy whatsoever.

The “consociational democracy” form of governance designed to accommodate for sectarian interests is largely to blame for the lack of policy-making. The post-Taif reality demonstrated that no decision could be taken without the consent of the three heads of state: the President, the Prime Minister, and the Speaker of the Parliament, representing the three biggest demographic sects (Maronites, Sunnis, Shias respectively) and commonly referred to as the “Troika.” Within this troika, each sect practically holds a veto power, and decisions are made by mutual consent. Economic policies are thus very hard to agree upon and subject to political tensions.

Governments with 30 ministers also make decision-making very laborious and time consuming, especially that by convention, the council of ministers’ decisions are taken in a consensual manner. With everyone wanting a say in matters of economic policy-making, sectarian dynamics often hamper the efficient management of the local economy.

To build an economy that will curb the corruption enriching the ruling status quo, provide the public goods the population needs and put an end to 30 years of brutal austerity, we will have to abolish the sectarian system.

The sight of cross-sectarian protesters all over the country demanding “the fall of the regime” is proof that the Lebanese people are ready for this major step. The protesters want to put an end to the sectarian system. To build an economy that works for all of us, we need to listen to their demands.