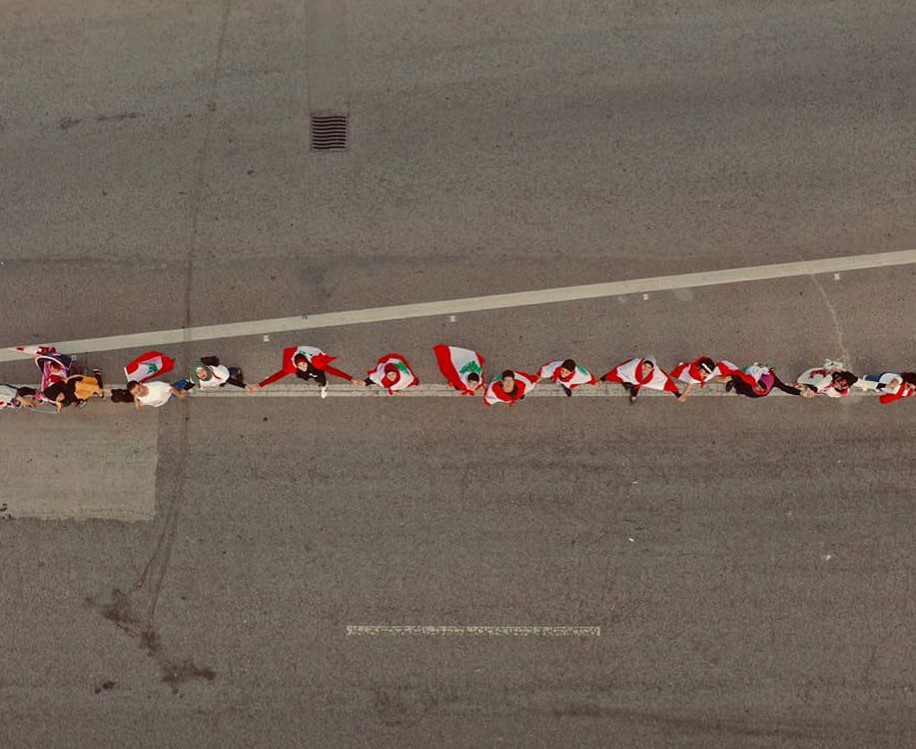 Aerial view of a part of the human chain formed by protesters in Lebanon on October 27. (Omar El Imadi)
Home
Community Voices
Activism

From Tripoli to Tyre: Protesters in Lebanon form first ever nationwide human chain

In the middle of the fight for rights, a new initiative flourished to raise demonstrators’ voices even higher. More than 170,000 people gathered yesterday on October 27, holding hands to cover a 171-kilometer distance along Lebanon’s coastal roads, from Tripoli in the North to Tyre in the South.

“I stand here today for my children, so they don’t have to fight for their rights,” said Kamal, who joined the chain with his cousin.

Lebanon’s human chain united people of all ages and backgrounds under one flag, nation, and anthem. Some of its participants had not taken to the streets as part of the October Revolution’s protests before, but felt the need to become a part of the new initiative.

The human chain wasn’t limited to Lebanese citizens. Expats from different nationalities,  who now consider Lebanon their home, also joined the movement. It was also not rare to spot Lebanese celebrities such as Nadine Labaki, Oscar-nominated Lebanese filmmaker, in some parts of the chain.

“This is a movement of solidarity to all of Lebanon and its people,” said A.G., who came with his two friends.

The Lebanese Human Chain was launched and organized by two sisters Edith and Julie Tegho, their cousin Muriel Aboulrouss, filmmaker and director of Zyara, amongst others, and Cyril Bassil, their close family friend.

According to the organizers, the credit of their action goes to the 200 volunteers who helped make the event a success and to all the people who joined.

“We love you all. Life is beautiful. As long as we are holding hands, no one can divide us,”the four organizers shared the same message. “And to those who did not join, we love you regardless and hope one day you join us in making a chain with every single person living in Lebanon. We are all brothers and sisters, we are all equal.”

The idea flourished during the first days of the revolution, fueled by Edith Tegho’s need to make a difference to her country.

Edith was in Lebaa, Jezzine, working at the family-owned oil-press business. The idea of the human chain is rooted in the olive trees she saw there. The way they were planted, in parallel lines, and the symbolism of peace, strength and victory they carried in Ancient Greek culture breathed life into her initiative.

Edith returned to Beirut on Wednesday evening, and shared the idea with her family the next morning to find that her cousin Muriel Aboulrouss had also been thinking about it.

Without wasting any more time, Julie Tegho created the event on Facebook that instantly went viral. What the four Lebanese citizens, independent from any group, were able to accomplish in only three days is a true exploit.

“The chain may have not been perfect,” said Muriel, “But it was a genuine act of love towards Lebanon, Lebanese citizens and towards everyone living in Lebanon. I believe that by holding hands, not only can we spread peace around the country, but we can do so across borders as well.”

Cyril Bassil finds that the recent and on-going events in Lebanon built solidarity between people in Lebanon. The chain symbolically sealed these new-found bonds, casting aside cultural, religious, social, and political differences.

“National unity is not a dream,” said Cyril. “It is what we have been living these past few days.”

The organizers of the human chain are also encouraging dialogue between citizens, believing that people can start building towards the same goal by discussing and sharing different points of view. “Be part of the conversation!” added Cyril.