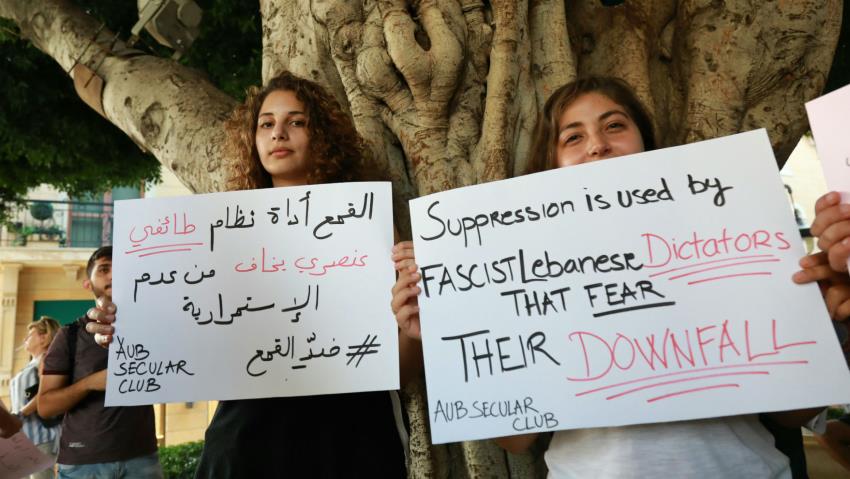 Suzan is gone, but the bureau’s violations persist

Suzan was ousted, but the Bureau’s practices and conduct still follow the same path. Major Suzan Hajj Hobeiche being “ousted” from her position as Head of the Cybercrime and Intellectual Property Bureau in October 2017 didn’t really affect the Bureau’s tendency to violate the right to freedom of expression by summoning journalists, activists, and citizens, whether for articles written or posts published on social media or any other electronic media. This raises the question: Is this conduct simply the approach taken by the Cybercrime Bureau or is there a more insidious reason behind it?

In 2018 alone, 41 journalists, activists, and citizens were summoned for interrogation by the Cybercrime and Intellectual Property Bureau because of social media posts (including posts and pictures on WhatsApp), compared to no more than 9 summonses in 2017, according to documentation by SMEX.

Most arrests were conducted as a reaction to criticism of the “Era of Strength” (العهد القوي) and a number of ministers, political and religious figures, and security forces. The Bureau (currently headed by Major Albert Khoury) seems to be a tool for the political class on the one hand and religious authorities on the other, in both cases servicing one purpose: the suppression of freedom of opinion and expression.

This suppression isn’t coincidental. It warns of a political decision to contain any critical voice—even if its platform is social media—using intimidation tactics. This was manifested most clearly during the period of time leading up to the parliamentary elections.

But, does this suspicious increase in the number of summonses in 2018 indicate that the Bureau’s performance and conduct improved after the decision of the Director General of the Internal Security Forces –General Imad Osman– to transfer Hajj Hobeiche to the Office of the Director General under his direct supervision and appoint Khoury as her successor?

Jad Shahrour, the Communications Officer at the Samir Kassir Foundation, doesn’t think so. In an interview with Beirut Today, he claimed that the Bureau bases its work on “an approach unrelated to its head.”

In most cases, when journalists and activists are summoned by the Bureau they are not informed of Article 47 of the Code of Criminal Procedure, which is the article that gives a suspect the right to contact a family member, an employer, a lawyer of their choosing, or an acquaintance, as soon as they are detained for the purpose of an investigation.

Beyond this violation of the most basic rights, the Bureau “extends its authority beyond the limits of the law by forcing detainees to sign a pledge not to repeat what they had written in a certain post, tweet, or comment or a pledge not to malign a particular politician or cleric. The Bureau has also been known to force detainees to provide them with the password for a social media account and many more violations that contribute to the suppression of the right to freedom of expression.”

Note that the “pledge to not malign” referred to above does not lead to the dismissal of the ongoing case and may, in fact, constitute an acknowledgement by the journalist or activist that they had intended to malign the subject of their post. As a result, several human rights organisations have asked journalists and activists to refuse to sign such pledges.

On the other hand, a source from inside the Bureau confirmed to Beirut Today that the office has not made any summonses on its own accord since the appointment of Khoury as its head, and that all summonses were conducted according to a reference from the competent judiciary after the file was referred to the Bureau. The source refused to answer a question regarding the Bureau’s unlawful extension of its investigative authority on journalists and activists and the coercion of activists to sign a “pledge of non-repetition” or similar. The source stressed instead that the Bureau carries out the instructions of the judiciary and the Public Prosecutor.

This position answers the question posed earlier about the change in the Bureau’s behaviour after Hajj Hobeiche was removed from her position. Previously, Hajj Hobeiche would carry out many of the violations referenced by Shahrour —and documented by organisations defending freedom of opinion and expression— of her own accord. Today, however, the Bureau carries out these violations under the direction of the Public Prosecution.

Perhaps the strangest decisions issued by the Public Prosecution, the first of its kind in Lebanon and probably the world, is the decision of the Public Prosecutor of Mount Lebanon, Judge Ghada Aoun, to compel Charbel Khoury to deactivate his social media accounts for one month. Additionally, investigators of the Bureau deleted all satirical posts from his personal Facebook account following a sarcastic post directed at a certain saint, on which the journalist Joy Slim commented. The post was met with insults and death threats directed at Khoury and his family as well as threats of harassment and much more. In her decision, Aoun disregarded all the threats being directed at Khoury and Salim in conjunction with the case.

Another case was documented in which a 15-year-old minor was detained by the Bureau because of a picture he posted on WhatsApp, which was considered an “insult to the president.” But what about the insult to childhood inherent in treating minors as if they were adults?

So who directs these general prosecutions? In Khoury’s case and similar cases in which certain clerics or behaviors are criticized, the head of the Catholic Information Center, Abdo Abu Kasam, plays an important role. In other cases where the “Era of Strength” (العهد القوي), Minister Gebran Bassil, or others were criticised, the intervention of the Public Prosecution occurs as a result of pressure from the presidential palace, according to a source from the Mount Lebanon Public Prosecution office at the Court of Appeals.

Lawyer Tony Mikhael, Maharat’s legal adviser, asserts that the main responsibility lies with the public prosecution, which is guided by the Public Prosecutor of the Court of Cassation, who in turn acts in coordination with and under the guidance of the Minister of Justice.

“The police state seeks to intimidate journalists and activists by issuing summonses to police stations and to the Bureau, while the Publications Act clearly stipulates its jurisdiction to decide on cases related to publications,” Mikhael explains. “These cases are supposed to be referred to the proper authority immediately, and if it is necessary to investigate the suspect then it is done by the investigating judge.”

It is important to note that cases related to publications or freedom of expression are subject to the discretion of Public Prosecution Offices at the Court of Appeals, which can refer them to the Court of Publications or to the “Bureau” without any justification.

The Bureau was created unlawfully

The Cybercrime and Intellectual Property Bureau was created with a Memorandum of service issued by the General Directorate of the Internal Security Forces in 2006 and was merged with the criminal investigations department of the judicial police.

Therefore, the creation of the Cybercrime and Intellectual Property Bureau is in itself unlawful and allows the Bureau to exercise de facto authority.

The Muhal platform, an observatory for violations of freedom of expression on the internet

On 27 February, SMEX launched its Muhal platform, a database intended to track and monitor cases of violations of online freedom of expression.

Muhal is an ongoing campaign by SMEX to document detentions and arrests related to online freedom of speech in Lebanon. It aims to raise awareness about these issues among civil society organizations, journalists, the youth, and other stakeholders and pressure policymakers to change the laws, particularly regarding defamation and libel, that have led to the majority of these arrests.

Muhal also aims to shed light on the pre-trial detention process and bring an end to this tactic, particularly for freedom of expression related cases.

The platform allows those who have been subject to arrest because of their social media activity  –or know someone who has– to report the case by filling in a form created for this purpose. SMEX, after having a specialized team investigate the violation, will upload the case to the platform archives.

Over 60 media and cultural violations in 2018: Is Lebanon a police state?

In 2018, the Samir Kassir Foundation documented more than 60 violations of media and cultural freedoms, divided between detentions, interrogations, and the banning of films. Most notable out of the major violations were the three prison sentences issued to journalists Hanin Ghaddar, Fidaa Itani, and Michel Kanbour in 2018, in addition to one issued in 2019 to Adam Chamseddine.

The perpetrator of most of these violations is the Cybercrime Bureau, with the rest divided between the Information Division of the General Security, Army Intelligence, and National Security.

Lebanon is the land of freedoms, but what kind of freedom are we referring to? The freedom of the Bureau and courts to summon us because of an article or a post expressing our opinion? What about the right to freedom of opinion and expression guaranteed by the constitution? And how many political asylum seekers will Lebanon amass during this “Era of Strength” that has turned Lebanon into a police state?