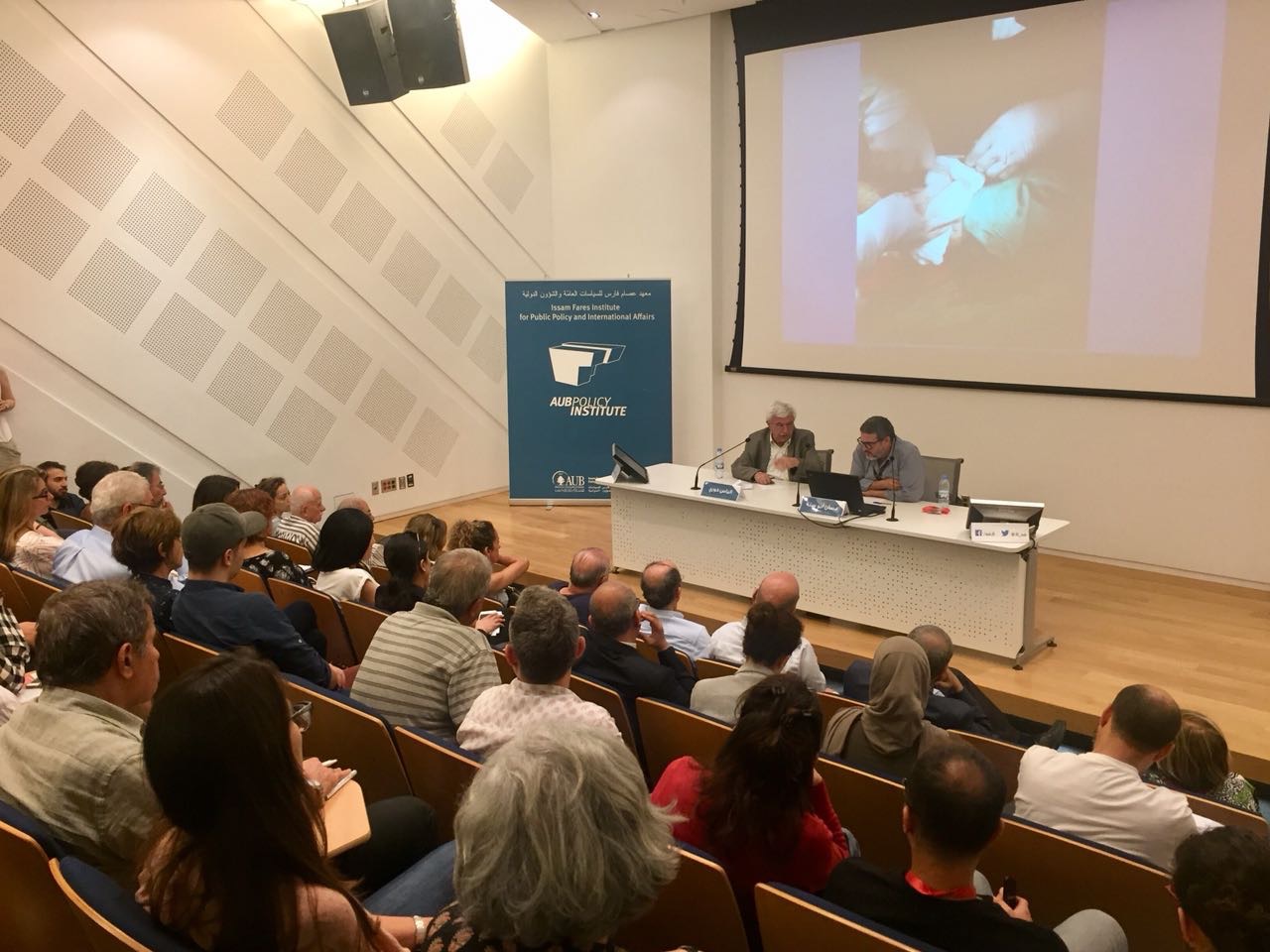 A chief surgeon at the American University of Beirut Medical Center (AUMBC) shared his recent experience operating on injured Palestinians in the Great Return March and peaceful protests in Gaza with guests at the Issam Fares Institute for Public Policy and International Affairs (IFI) on Monday, May 28.

Dr. Ghassan Abu Sitta, the head of the Division of Plastic & Reconstructive Surgery at AUBMC, spent two weeks in Gaza during the marches commemorating the 70th anniversary of the Nakba. He also visited Gaza during the second Intifada in 2008, then in 2012 and 2015, with his most recent visit on Friday, May 11 being spent in one of the few medical institutions still functioning in the area, Al Aouda (The Return) Hospital. The surgeon found that more than 9,000 individuals were injured, 500 of which were waiting to undergo reconstructive surgery.

The surgeon was introduced by Lebanese novelist and public intellectual Elias Khoury, who called Abu Sitta a fighter putting his knowledge in the service of his people and the Palestinian cause. He also called this knowledge a weapon to resist the occupation that would aid to change this reality, and described the relationship between knowledge and practice as one that is inseparable.

Khoury also suggested that citizens today are witnessing a large transformation that reflects a new Palestinian reality with two names: the ending of the Oslo illusion, and a transitional period that remains unclear. Khoury is also convinced that the Palestinian experience is capable of renewing itself, and that Israel wants the Palestinian people to disappear, which makes it necessary to finds new ways of resistance.

Abu Sitta discussed his experience in Gaza chronologically, and provided his own analysis and conclusions on the events taking place. The wounded Palestinians at Al Aouda Hospital belonged to an age range of 15 to 25 years, which happens to be the same age range of the leaders and organizers of the marches.

The World Health Organization (WHO) and the Palestinian Ministry of Public Health had issued a decision to reorganize the medical sector, one that included establishing centers for the injuries near the locations of the protests. Ambulances would be prohibited from taking the patients to the hospital without passing through these centers first. The centers would also know beforehand about specializations pertaining to specific hospitals, so they could direct the ambulances.

A large number of injuries, like the 9,000 that Abu Sitta mentioned, is meant to paralyze the hospitals. The surgeon also highlighted that many of the wounded were children who had to undergo amputations due to the usage of shrapnels, which are prohibited by international law. Today, 22,000 individuals are disabled because of the war in Gaza, hence the purpose of Israel is to disable the protests.

Abu Sitta described the return of the injured people to the protest as an incredible social phenomenon. He also discussed how this prevents Gazans from providing to their households, which in turn contributes to more poverty and more severe psychological trauma. Similarly, targeting the bones of the protestors causes a complete paralysis in the medical centers and in the Palestinian society as a whole.

For Abu Sitta, these protests indicate the ending of a historical period that began in 1974, proven by the dominance of the idea of the right of return once again politically. Additionally, the economic situation is disastrous, the siege has persisted for 12 years, and the employees and doctors have not received payment in a year and a half.

The Q&A section brought to light different questions and interests from audience members, including the demands of the Arab and international communities. Abu Sitta mentioned that help is needed to end the siege and ensure economic development. Another question pertained to the effectiveness of the tent, which Abu Sitta answered by stating that the care that injured protesters received at the tent helped decrease the number of martyrs before transferring them to the hospital.

Whether evidence can be submitted to the International Criminal Court (ICC) was also asked, with the surgeon indicating that documentation of the use of prohibited weapons, such as shrapnels, has improved. As for the role of the displaced Palestinian medical doctors, their contribution depends on having a foreign passport to enter.

The last comment from the audience questioned how Israel can be held accountable when the Zionist entity has always considered itself above the law, especially with protection and support form the United Nations. Novelist Elias Khoury answers that a very important problem is understanding that the fight today is against Zionism first, but also against its ideological manifestations.

Activist and researcher Muna Khalidi’s efforts to raise funds on social media were also mentioned during the discussion. The purpose of the fundrasing campaign was to buy the external fixators for the legs of the injured protesters which are very expensive.