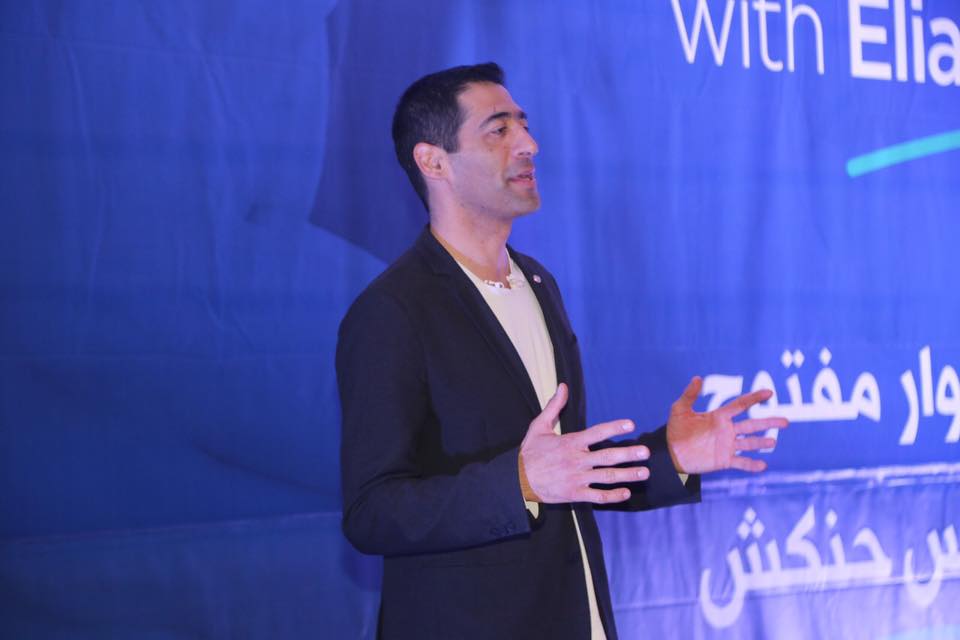 Elias Hankach has been a member of the political bureau of the Kataeb Party since 2015. He graduated from the Holy Spirit University of Kaslik (USEK) with a bachelor’s degree in marketing, and has completed training courses in Harvard and the London Business School. With previous experience working for Taanayel Farms and Red Bull, where he became a general manager at the age of 27 and helped establish Red Bull Egypt, he is currently a partner in a food training company in the Middle East and North Africa region. Hankach was also appointed as an advisor to the Minister of Economy in 2014 and has held different positions in the Kataeb Party over the years, including being the Assistant Secretary-General and Deputy Secretary-General.

Elias is running for the Maronite seat in the district of Mount Lebanon II (Maten) on Kataeb’s Maten electoral campaign, Nabad El Maten (Pulse of Maten).

Since school, I have always been involved in activist movements. I remember when we distributed pamphlets when General Michel Aoun was not allowed to appear on MTV in the late 90s. Since that time, I have always believed that we ought to be involved in what’s happening in our lives, and not simply whine about our situation. Since 1975, the situation in the country has been deteriorating, and I think that all those who have a better vision for Lebanon, especially the younger generation, can make a difference. I truly am certain that we can make a significant change in Lebanon, especially because it is a small country where a small change will have a large impact. I am confident that we can transfer the success of the private sector to the public sector. I am doing this for my children to have a better place to live in.

As we did in 2009, we’ve announced our candidacy based on a project and not a slogan. We are asking, first and foremost, that the Kataeb as a party, and its supporters, before other Lebanese individuals, hold us accountable based on this project. We are responsible for this project, which is divided into 5 chapters, including 131 practical and time-bonded points. The project tackles different issues, whether political, economic, social, environmental, or sovereignty-related. Being positioned in the opposition, we aim to criticize constructively, always providing alternative solutions.

According to a report by the International Labor Organization, “World of Work Report 2014: Developing with Jobs”, unemployment rate in Lebanon is 24%, while youth unemployment had been reported to be 35%, how will you work to address this and what steps should the government take to increase and to generate sustainable job creation?

I have personally been a victim of this issue, remaining unemployed for 9 to 12 months after graduation. Upon graduation, young people find themselves forced to leave the country to work. First, creating more job opportunities includes [the need for] a stable political situation, a growing economy, and a motivation for multinational companies to invest in Lebanon. These three conditions are not easy to fulfill, especially political stability, which is highly connected to our interaction with what’s going on in the region and internal conflicts, but this has to come at some point in time.

Second, there needs to be major work done when it comes to academic orientation. In Lebanon, we have too many doctors, engineers, lawyers, and business administrators. We have not been channeling our youth into technical fields, which can generate more job opportunities.

In addition, being employed by big corporations is not a necessity. People can create their own businesses. The government has to begin providing small, long-term loans with support on the interest rates for fresh graduates to create their own businesses. Furthermore, the government has to provide a good working environment; shared offices and tech hubs are examples of such environments. As Lebanese individuals, we have all the components that allow us to create and initiate hubs in different locations around the country, with all the facilities and supports, like tax exemptions.

As Kataeb, we still support the solutions we have proposed earlier. Waste management has to be decentralized and taken care of on the municipality level. This starts with recycling from the source. What is necessary is that we proceed away from the current situation because the implemented government solution of disposing the untreated waste by simply throwing them in certain locations has been proven to be the worst possible solution. The government has also lied to the people, promising that waste disposal will be done with high, international standards and with close monitoring, when that has not been happening. Such mistakes are irreversible. Solutions on the municipality level can evolve to waste-to-energy, or producing fertilizers.

As for incinerators, the issue is highly debatable. Environmental experts claim they are harmful for the environment, and that is understandable. On the other hand, incinerators of late generations are found in very advanced countries. All I can say is that more research has to be done on the issue.

Do you think that the public or the private sector should pave the way in recycling? Should recycling be made mandatory for every household in Lebanon?

Recycling starts from the household and must definitely be mandatory, it’s the least that Lebanese citizens can do. Any issue which a failed government like ours is unable to handle has to partnered with the private sector. Public-private partnership has to be cascaded to deal with different issues, including infrastructure.

There are many successful models in the world that we should replicate. It is not difficult to follow the model presented by Sweden or other Nordic countries, by ensuring transparency and good governance, alongside taking the environment into consideration. Everything we are going through has been observed in the world before. Lebanon ought to join international organizations and sign agreements related to the oil and gas sector, and to transparency.

Lebanon lacks public spaces. There has recently been an increased level of awareness on this issue, and this is due to the work of the private sector. We have municipalities, in partnership with big sponsors, creating public gardens, public spaces, and public sports centers. Unfortunately, municipality houses are being built at the expense of sports centers.

How would you describe the Lebanese government’s performance and actions in dealing with the Syrian refugee issue? Do you think that the legislative can promote policies that better their conditions?

The government’s performance with regards to this issue is the worst one can possibly think of. This issue dates back to Mikati’s government, when the Free Patriotic Movement had ten ministers who were calling for the closure of the borders. Since the beginning of the Syrian crisis, Kataeb has asked for camps to be established on the Lebanese-Syrian border, under the observation and control of the UN. The borders were not closed, and camps were not established. As a result, we are witnessing what I believe to be the biggest crisis in modern history, whereby almost 50 percent of Lebanon’s residents are refugees. In addition, different sides have been very creative in giving refugees reasons to remain in Lebanon and compete for jobs with the Lebanese, who are already migrating due to unemployment.

Due to the chaos, I think it has become a luxury for the refugees to be in Lebanon, as they are able to work anywhere and open any project, such as a bakeries or clothing stores without paying taxes. The solution is either redistributing those refugees, sending them back, or establishing camps. Since the Syrian crisis doesn’t seem like [it will be…]solved anytime soon, those refugees ought to be redistributed to Arab countries who don’t have a demographic issue like Lebanon, based on their population and available space.

In terms of a woman’s right to be able to naturalize and pass on the Lebanese nationality to her children, do you think the legislative should work to create a policy that naturalize every Lebanese woman’s children, or only allow women to pass on their nationality based on certain exceptions

It is ridiculous to still debate a woman’s right to pass her nationality to her children. Women should have this right. However, as hard as it is to say, there has to be certain criteria for passing the nationality.