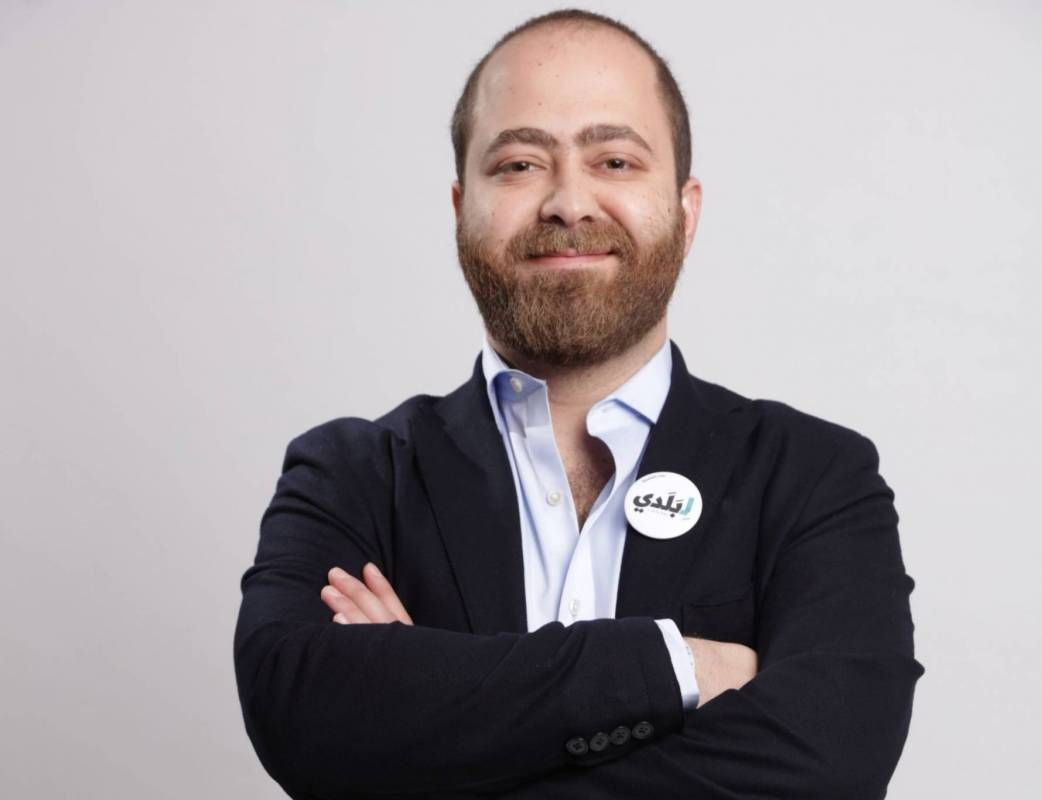 Yorgui Teyrouz is a pharmacist and the founder and president of Donner Sang Compter (DSC), a non-profit, non-governmental organization that aims to promote and raise awareness about voluntary non-remunerated blood donation in Lebanon.He also ran for the 2016 municipal elections with Beirut Madinati.

Teyrouz is a candidate for the Armenian Orthodox seat in Beirut I with the Li Baladi electoral list. 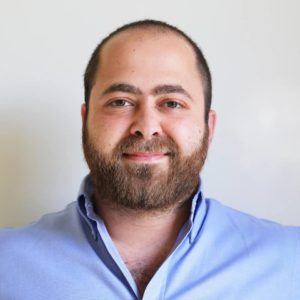 There is a responsibility that someone needs to take and I felt this sense of responsibility after my experience with Beirut Madinati and after the collective experiences of activism and fighting corruption. The difference between us and any other group running for elections, is that we [as Li Baladi]  work as a team. I don’t care if I make it to parliament. What matters is that any of us does, and that our “project” is delivered.

The pillars of the platform go as follows: I am focusing on three issues being health, environment, and the youth. I will work to generate more job opportunities for youth groups for them to grow a sense of citizenship. The issue of health is very important for me as a pharmacist and the founder of Donner Sang Compter (DSC) organisation. If I don’t have health, I can’t accomplish anything. I have advocated for environmental preservation in many instances in my life.

Also, as part of the Li Baladi platform, there is a focus on the individual. We will target issues like freedom of expression, working for a dynamic city, environment, heritage and education, effective governance, independent judicial system, better infrastructure…etc. All of this again goes back to the individual and not the group, we think of the citizen, the individual, and not the group.

All groups need to be represented equally and citizen participation will be encouraged at all times.

I will work to encourage small to medium enterprises, reduce taxations, provide some kind of insurance for their sustainability. Many citizens are afraid of starting businesses in fear of taxation and abolishment of insurance. If better monitoring of such businesses occurs, with less fraud and bribes going on, we will end up with more employment opportunities. We have a lot of potential in the country. So, we need to stop the heavy taxation and unjust policies applied to the underprivileged, and on the other hand, impose such policies on the richer individuals and businessmen. The current law we have in Lebanon is making the rich people richer, and the poor people poorer. Recently, Al-Iskan loan was frozen which is a harsh hit against the youth who seek to purchase a house, and this is disastrous and needs to be stopped.A combination of reduced loans and low job opportunities does not work.

There are so many factories, funded by the EU and USAID, that stopped functioning  all around Lebanon.We did a tour with ‘Tol3it Rihetkoun” and we observed how factories dealing with waste are functioning. They are all working at under capacity. A factory that has a capacity for 50 tons, is receiving only 10 tons.We need to get those factories to work. Let’s decentralise the system! Give the municipalities more authority, give them more money and funds. The current political factions have been centralising the issue of waste.

We also need to push for the reduce in waste production and encourage recycling. This glass of juice in front of you can be drunk without a straw– this restaurant along many others have been contributing to waste production. So, this is also a matter of awareness.

The argument that municipalities are underfunded and can’t handle managing the waste is no longer valid. If we encourage municipalities enough, we will be driving coalitions of municipalities to join efforts which will attract funding and waste management projects would eventually be underway. The solutions are there.

There should be a national strategy. During our tour in the “industrial city,” we noticed that some people are recycling iron and plastic on their own with no measures or guidelines being given. We need to help develop those factories’ technologies for the to receive more quantities of waste and deal with those better. We only need a minimum of funds.

Incinerators are out of question. Go watch Ziad Abi Chaker’s documentary and see how dangerous the material that comes out of incinerators is. In Denmark, in the 70s, they threw their waste into water. To date, they are still picking up the waste and remains from their waters. What do you think is going to happen in Lebanon in 40 years? Putting up filters amidst today’s political environment is not under question– this is a highly technical issue that requires effective and responsible governments to deal with.

Implementing recycling fully in households now is not practical. There are two schools of thought: [one is]recycling from source and [the second is] picking up waste that is transported to factories for recycling. The first does not really happen in the blink of an eye, it is not a 2-10 year-long process, it takes much more time. It requires time and taxations and an entire shift of trends.

We need awareness for citizens to gain a sense of citizenship. In countries abroad, there are entire systems put where companies would charge you around five dollars to recycle, and the more you recycle, the more the company would knock on your door. We need awareness in the first place. Lets use less plastic. Roadster Diner stopped using plastic straws very recently. Baby steps. There are ongoing initiatives and both public and the private sectors can and should contribute.

Green spaces need to be accounted for. In every empty space, we need to grow plants. This is something we experienced during Horsh Beirut with NAHNOO. Random construction sites should not be allowed anymore. There is no criteria being given. We should plant on every building roof, it will beautify the city. Vertical planting is also an option suggested by many.

Our list includes Laury Haytayan. She is the expert on this, I’m not, quite frankly. We know that in production, we will be also witnessing heavy and serious pollutants. In terms of policies, we will be pushing for informed policy-making, and this is something Laury is already working on. The impact of oil-drilling on the environment is not going to be worse than the impact of waste dumping, especially that oil drilling impact can be controlled with environmental impact reporting being a top priority for us. It’s not only about money.

When we travel, we go to a park to see people and socialise. Such sites would promote unity and wellness and health. Our platform heavily encourages increasing public spaces in Lebanon, and it is a priority. In Downtown Beirut, there are huge spaces with bettone when in fact it’s a chance to increase greenery. It doesn’t make sense. Beirut is losing its greenery step by step.

There are many policies to solve this issue. On the way from Mansourieh today, I saw dust and waste disposed on streets randomly on long distances. We should increase public transportation schemes to reduce the air pollution already caused by burning. We need to support factories by providing more technologies and guiding those dealing with waste better.We need to push for recycling and reducing waste production everywhere. The greenery we have in Lebanon is special, it is not like Europe. It is different, and it would be a shame for all this uniqueness to go to waste.

The government did not manage the refugee issue well from the very first moment. The government should have guaranteed a space for refugees to sustain themselves and find convenient job opportunities, and not just spread them all over the country in a disorganised manner. The refugee needs to get all rights just like any citizen living in Lebanon. If you travel to another country, and want to work, there are certain conditions you have to meet. If you do meet those, you will be granted a position to sustain yourself. This did not happen in Lebanon, refugees were exploited with no criteria being set for employment.

We can’t blame the weak when it’s on us. While we are busy giving racist comments and issuing racist policies like those preventing Syrians from moving around after 6 pm, we could have come up with solutions. The crisis could have been managed a hundred times better. It is now up to the parliament, to the legislative, to find suitable solutions for all.

Why are we so happy with two million tourists visiting the country, but not refugees? What’s the difference? Many of my customers are Syrian nationals. The refugees contributed to our economy, but our government never saw that. In the medical sector, doctors and nurses are working more now, with more refugee patients, which means they’re earning more. This is a positive contribution to the economy. We should stop blaming the Syrians, and start becoming solution-oriented.

We have a waste crisis. Start factories and employ refugees, as Lebanese citizens do not want to work in such sectors. More refugees will be employed in this sector, and the argument that refugees are taking away the jobs would no longer be valid. There are so many solutions in front of us.

Definitely. In all countries, there is a process. If you apply for citizenship in France, you’ll have to live there for five years, and work, and pay taxes. It’s not a simple process, and it has nothing to do with gender. Everyone needs to go through a transparent process. Let’s stop the discriminatory statements.