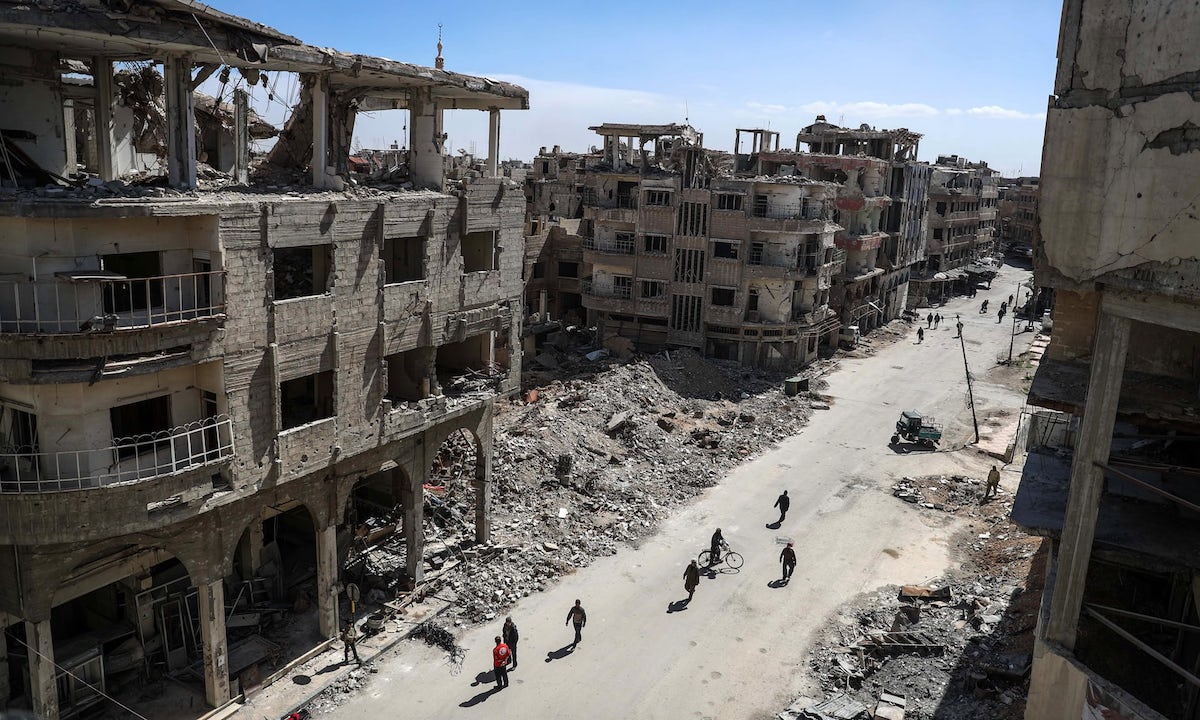 On the Importance of Looking

What words can persuade more than children live-streaming their deaths? What can be said that hasn’t already been said? Ultimately, what can one do to affect any change? These are questions I’ve been asking myself for a while now and have, since last week, come to a head. In Eastern Ghouta, a suburb of Damascus that has been under government siege for five years now, more than a thousand people have been killed in the past three weeks, and bombs still dropping and the fighting continues. Alongside these deaths is an intense rewriting of the facts on the part of the perpetrator of the violence. In besieged areas, where the regime prevents foreign journalists and correspondents from entering, this is much easier to do. The control of information usually leaves outside observers both ignorant and impotent.

The crucial difference in the Syrian case is that those under siege are actually able to broadcast their messages, particularly in the form of images of the dead and maimed, of destroyed buildings and ghosted streets. Everything Russia and the Assad Regime don’t want us to see is readily available on Twitter and Facebook.

Yet, even still, people seem content with looking the other way, and I can’t entirely blame them. Looking at images of dead children is not pleasant, but it becomes even more unpleasant when there seems to be nothing that the observer can do about it. After seven years of civil war, people are burnt out from discussing and acknowledging the situation in Syria and this desensitisation needs to be addressed.

I am not addressing the Assad apologists or the peddlers of Muscovite myths here, but instead more sympathetic observers, those who are desperately asking “what can I do?”. This seems like quite a crucial question. That’s not to say though that there have been no responses to the recent uptick in violence.

For instance, on Sunday, Feb. 25, a protest was held  in Beirut in solidarity with the people of Ghouta. In an attempt to reach individuals in various countries, protesters held up signs in Arabic, English, Russian, and Turkish. Their slogans highlighted the

world’s growing apathy, solidarity with the people in Syria and the rejection of foreign interventions, by state-actors, such as Iran and Turkey, and non-state actors, such as Al-Nusra and Hezbollah. Similar solidarity protests have also taken place in Berlin and London.

Others have taken to Twitter, or other social media platforms, to dissect the myths of the Russian propaganda machine. However, if the concept of “leading by example” is taken into consideration, would these acts motivate desensitized people out of their apathy? The response, I reckon, would still be the same: how is this actually going to help the people of Eastern Ghouta? How could it stop the bombings?

Indeed, what is happening does seem uncontrollable, and the predominant helplessness is deeply frustrating and distressing. If the United Nations Security Council (UNSC)‘s sanctioned ceasefire hasn’t been able to provide any cessation in air raids, how could an article or a protest? What’s left for most people to do is to look on, to break the silence and, if possible, to organize or take part in organized action.

Despite the helplessness and the international community’s failure in stopping the humanitarian crisis in Eastern Ghouta, continuing to look and refusing to remain silent is still valuable, especially when we consider four factors.

First, the people of Ghouta want us to know, as has been said numerous times, about what is happening in Eastern Ghouta. They want the world to bear witness to the crimes they are suffering from and who the criminals are. There’s a constant appeal by many in Eastern Ghouta for the international community to save them. This is why so many of them have taken to Twitter in English, as an attempt to appeal to foreign viewers.

If we cannot provide them help, the least we can do is to listen to them. Muhammad Najem, for example, is a 15-year-old who documents the violence and destruction in E. Ghouta. A pinned post on his Twitter feed reads, “We know that you got bored from our blood pictures, But we will continue appealing to you.” To look away is to ignore his wishes and to say “you’re right, we are bored.” It is our moral obligation to respond to people like Muhammad, or rather, to not turn away.

As a logical opposition to this, the second factor lies in the fact that our silence is exactly what the regime wants. Assad and his supporters are spreading a narrative where the violations of human rights taking place in Syria are grossly dismissed as fake news. Bashar Al-Jaafari, Syria’s representative at the UN, for one, claimed that no killing of civilians in Eastern Ghouta is taking place, which amounts to a total denial of reality. Others, such as the Russian government-funded television network RT, have argued that the opposition fighters in Eastern Ghouta are causing the deaths, and preventing the government from helping its own people. Such a distorted narrative aims to distract people from the reality on the ground: people are being killed in the hundreds by overwhelming firepower.

The regime clearly does not want us to look at the photos coming out of Eastern Ghouta and to take them seriously, or if we do, we should blame Al-Nusra. They would of course much prefer we not look at all, and allow them to continue doing what their state and military power affords them. To look is to disobey Moscow’s orders, and to, in a sense, prevent them from a further victory. We may not be able to save the lives of the civilians in Eastern Ghouta, but the very least we can do is to not look away.

The third factor to consider lies in the fact that, by remaining detached from the conflict, we are still actually taking a side. As Archbishop Desmond Tutu once said, “If you are neutral in situations of injustice, you have chosen the side of the oppressor.” Whether we are considering Syria, Palestine, or any other situation that feels out of our control, we cannot simply remain neutral. Looking away is choosing the regime over the citizens of Eastern Ghouta.

The final factor will probably be a redundant one. It’s a reminder that we are all, hopefully, citizens within democracies. That fact means that, to a certain extent, we are not completely helpless in deciding our respective nations’ response to the atrocities in Syria. An open letter with over 200 signatures that highlights our capacity to make a difference was released on Feb. 27. We have elections coming up in Lebanon and, if you have continued to look on, you should carry those images with you as you enter the booth.