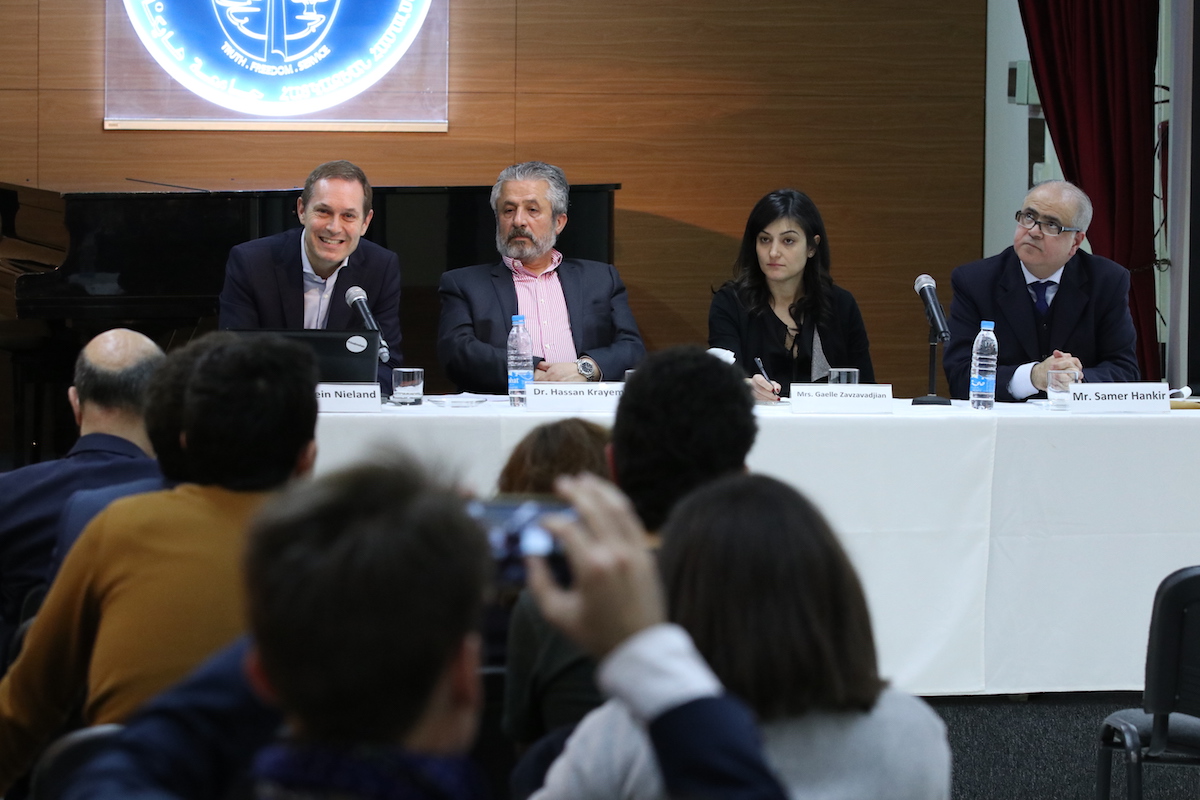 The Political Science Department at Haigazian University emphasized the importance and difficulty of reshaping the inefficient Lebanese public sector through a seminar hosted under the patronage of H.E. Dr. Inaya Ezzeddine, Minister of State for Administrative Reform.

The event, held on February 2 and titled ‘Challenges of Reforming Lebanon’s Public Administration,’ consisted of a three-person panel aiming at providing insights on the issue at hand. Given that the ‘government’ (or al dawle) constantly elicits contempt and derision from the Lebanese population at large, this seminar was a much-needed addition to a conversation that should be taking place across the whole country.

Dr. Paul Haidostian, President of Haigazian University, then introduced Minister Ezzeddine, who delivered an address outlining what the Office of the Minister of State for Administrative Reform (OMSAR) has been striving to accomplish. Ezzeddine outlined the numerous major challenges that the public sector in Lebanon faces, from incessant local and regional political instability to government mismanagement of funds and hidden networks of interest lurking behind the public sector.

Ezzeddine also explained how OMSAR is seeking to regain citizens’ trust through two ambitious strategies. Firstly, OMSAR is seeking to enact a digital transformation of the Lebanese public sector, which will supposedly create innovative new channels of engagement between citizens and the government, and will make Lebanon a more appealing recipient of aid for donor countries. Secondly, regarding the fight against corruption, OMSAR is currently in the process of drafting a National Anticorruption Strategy, has identified key sectors of the public sector where corruption thrives, and has begun to conduct workshops to prevent corruption and increase transparency.

The Minister concluded her address by outlining the challenges that these two ambitious strategies face, namely the shaky current infrastructure regarding e-governance and entrenched corruption, but optimistically claimed that public administration in Lebanon, unlike what late Babikian’s claimed, can be reformed.

Samer Hankir, from OMSAR, further elaborated on Minister Ezzeddine’s speech, explaining how OMSAR influences the decision-making process at the governmental level by lobbying the Prime Minister and Members of the Lebanese Parliament to support draft anti-corruption laws and to support administrative reform initiatives. Hankir stated that one of the major challenges that the public sector faces in Lebanon is the lack of effective leaders, as most high-ranking appointments are politicized.

Rein Nieland, the Head of Cooperation of the EU Delegation to Lebanon, explained how the EU has contributed to the reform of public administration in Lebanon by supporting initiatives that seek to strengthen good governance and the rule of law. Since the 2006 Lebanon-EU Association Agreement was signed, the EU has substantially invested in initiatives, such as civil society organizations and local authorities that promote transparency, seeking to combat corruption and promote administrative reform in Lebanon.

Dr. Hassan Krayem, the Governance Programme Manager at UNDP Lebanon, briefly explained how the Lebanese public administration emerged during the Chehabist era and how it subsequently evolved following the Taif Agreement. Krayem emphasized that the lack of policy planning and the lack of political support for reform from the highest-ranking officials in the public sector are among the most serious obstacles to reform.

Given that Lebanon is a ‘human resources-exporting’ country, where many highly-educated Lebanese travel abroad to find meaningful employment and opportunities, Krayem elaborated his point further by stating that it is a sorry state to see that the country’s brightest minds are neither encouraged nor tempted to serve in the public sector given the latter’s poor reputation when it comes to career mobility and salaries.

The public sector in Lebanon is in need of serious reforms. Arguably, the major issue that the public administration faces in Lebanon is the sectarian politicization of appointments to senior positions. When unqualified individuals with political connections are given elevated positions in the state bureaucracy, policy-making becomes paralyzed, ministries no longer manage to function effectively, and the already-low esteem that citizens place on the government further plunges.

Although Minister Ezzeddine ended her address on a somewhat optimistic note, the panelists’ outlook was ostensibly gloomier. Since the 1960s, several Lebanese governments had ministers with portfolios of administrative reform, such as the aforementioned Babikian, some of whom embarked on ambitious attempts at modernizing the public sector. Yet, all have failed. Nonetheless, acknowledging the faults in the system is the first step towards reforming it, and OMSAR’s efforts are much-needed. One may only hope that Minister Ezzeddine will succeed where others have failed.