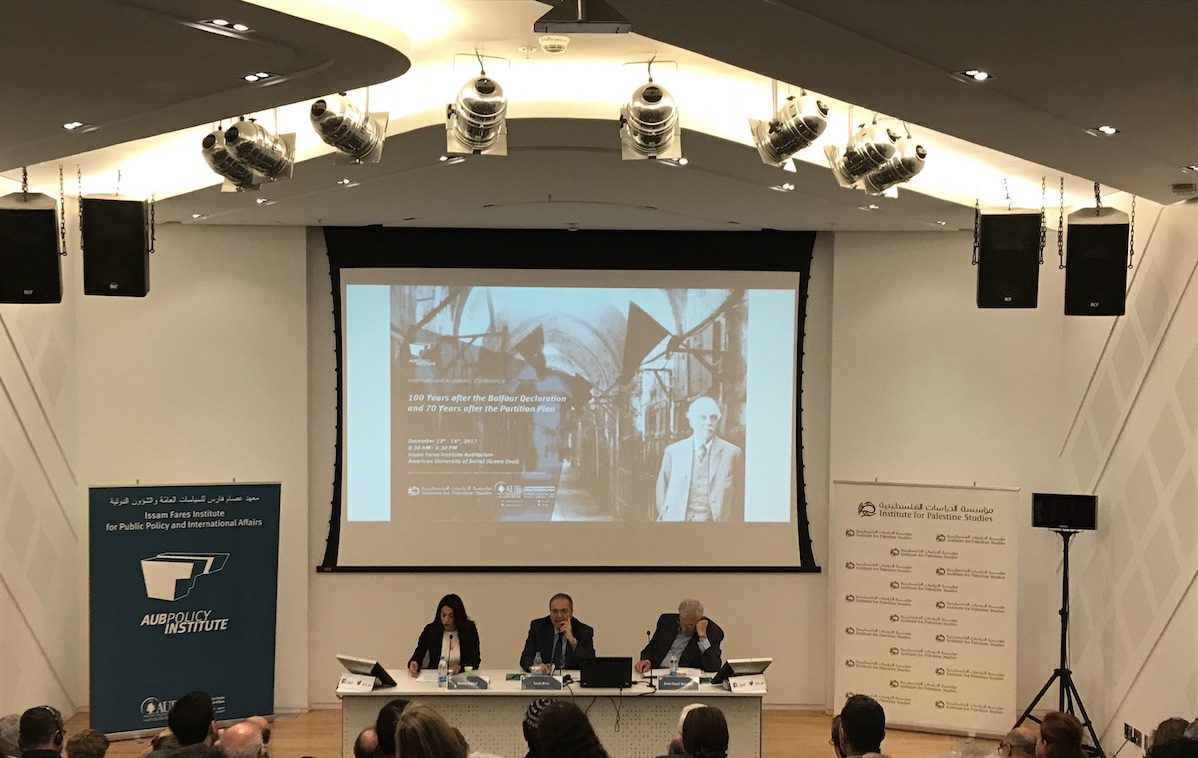 100 Years after Balfour Conference: An Exploration of the Past and Future of Palestine

On  December 13th and 14th, the Issam Fares Institute for Public Policy and International Affairs (IFI) hosted an academic conference titled  “100 years after the Balfour Declaration and 70 Years after the Partition Plan”, in collaboration with the Institute for Palestinian Studies. In the wake of US President Donald Trump’s decision to declare Jerusalem as the capital of Israel, the conference could not have come at a more timely moment.

Though one of the conference’s main themes was Trump’s decision, speakers and attendees managed to move past it to discuss the future of Palestine, the peace process, alternative solutions to one of “the longest conflicts in modern history”, and even contemporary Lebanese politics concerning Palestinians.

Noura Erakat, a human rights attorney and George Mason Assistant Professor, told Beirut Today that “knowledge production” and conferences like this one “are important on many levels. They are important in establishing a historical record to think collectively and in establishing who are those who can speak on behalf of Palestinians.”

The two-day conference gathered an array of prominent academics, journalists and speakers that tackled topics, ranging from the historiography of Palestine, Balfour, the Nakba, and Jerusalem to Zionism, occupation, annexation, and settler colonialism.

The conference started off  with an opening speech made by IFI’s Director Tarek Mitri which was followed by a surprise appearance by Palestinian American and Columbia University Professor Rashid Khalidi who was meant to speak the day after. Khalidi emphasized on the importance of placing the US on the other side of the table with Israel, a side that it had implicitly always been on, rather than as the main “broker of peace”.

Khalidi repeatedly stressed on the need for “a commitment to the national self-determination of the Palestinian people”, as well as the vitality of undertaking a new approach to the peace process which could help resolve the ongoing conflict.

Erakat also spoke of the need for a new approach to international law. In her presentation of the thesis of her new book, Erakat took the audience through a post-colonial exploration of the foundation of international law as a body that was established during the colonial era , as one that was founded by Europeans to justify their conquest of indigenous peoples and their land.

Erakat also compared the establishment of legal framework of the Palestinian-Israeli conflict to the creation of international law, where the body of law is created unilaterally and is done so by the power that has the upper hand. However, she also argues that international law could also serve to benefit the Palestinian people, since “the law can be interpreted in different ways”.

Erakat stated that the law should not be the sole or main strategy used to achieve Palestinian liberation, but rather law should be featured as a feature in a political strategy that includes both international support as well as different modes of resistance that range from cultural to political and national resistance.

The second day of the conference featured a more comprehensive focus on the Balfour Declaration and what came after as well as the foundation of Zionism as an ideological and political movement.

Gilbert Achcar, a Lebanese academic and Professor at SOAS, University of London, stated that “Zionism emerged as a reaction to a prolonged repression phenomenon the Jewish minorities have suffered from in Eastern Europe during several decades”, where Jewish Zionism was radicalized by the increasing anti-Semitic sentiments.

The Balfour Declaration is a letter and declaration sent from Arthur J. Balfour to Walter Rothschild on November 2nd 1917. The letter declared “the establishment in Palestine of a national home for the Jewish people” with respect to “Jewish Zionist aspirations”.

Khalidi analyzed that the Balfour Declaration was “a declaration of war on the indigenous population in Palestine” within a settler colonial framework and project, and is one of many international documents that constitute as a declaration of war; this includes UN General Assembly Resolution 181 or the Partition Plan. In addition, Khalidi also stated that “there is no mention of Arabs or Palestinians” in the Balfour Declaration, which assumes  that “Palestinians do not exist” and are thus not granted national and political rights.

Khalidi also outlined the structure that has led to the struggle for Palestinian liberation as “last colonial conflict” and “was sanctioned by outside powers, beginning with Great Britain”. He compared Great Britain promising “another nation the land of a third nation”, to Trump’s promise of Jerusalem to Israel. Khalidi reasons that “Zionism is not the main problem, but a part of an even larger problem ” that is inclusive of the role of international actors, such as the US, have played in legitimizing “the century-long colonial war waged on the Palestinians”.

In order to “wage the war from our side”, Khalidi proposes that there should be a clear  understanding that  the conflict as a colonial one. Starting from there, we should “demand for an entirely new formula for the resolution of this conflict”. This new formula would feature “a coalition of international actors taking the mediator’s role away from the United States and basing it on the basic principles of international law, such as the principle of self-determination”, he explained.

There also seemed to be a consensus among the speakers on the establishment of the national and political rights of the Palestinian people. One of the attendees  asked whether or not the right of Palestinians to Jerusalem should be argued as a religious right, speaker Maher Charif, a Palestinian historian, fervently stated that “Palestinian rights and liberation should always be argued on the basis of national rights” as to do other wise would be similar to arguing Palestinian rights with the same rationale as Zionists have used to argue their rights, to which the audience received with applause.

The conference concluded with a discussion led by Lebanese novelist and writer, Elias Khoury. Khoury stated the “1918 Balfour Declaration was the first Nakba in Palestinian history” and Palestinians have been experiencing it for 100 years and not 70 years since the 1948 Nakba.

To say the least, the conference was a truly compelling examination and exposure of historiographical understanding of the chronological events, documents, movements, and individuals that has led to the arbitrary disenfranchisement and land theft of the Palestinian people. It also managed to provide a distinctively illuminating discussion around the subject of ‘what can be done next’.

Though all available tactics of resolving this conflict and the attainment of Palestinian liberation have been exhausted, an essential factor that is often forgotten is that there  is always an alternative strategy and route. With the official exposure of the US as a pro-Zionist power, and the eventual exposure of Israel as a Zionist apartheid state, there could not be a more appropriate moment for the Palestinian Liberation Organization (PLO) to take an initiative to finally attain justice for the Palestinian people.

The question that was left on the table is should the Palestinians opt for a temporary one-state solution with equal national, political, and civil rights? With Trump’s recent declaration and the already sizeable portion of territory that has been annexed since 1948 rendering the two-state solution nearly impossible, this is a question to consider today.