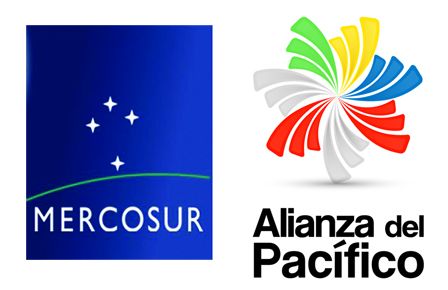 According to Mario Armando Vázquez Soriano, a Professor and Specialist in Regional Studies at the University Tecnológico de Monterrey Campus Queretaro, the Latin America region encounters two possible perspectives in commercial and political terms– on one front, resides the vision of the group Common Market of the South (Mercosur), and on the other, the vision of  Pacific Alliance.

Mercosur comprises a regional integration process formed by Argentina, Brazil, Paraguay and Uruguay. Such an aggrupation has the objective of creating a common space that seeks to promote commercial and investment opportunities through the competitive integration of national economies into the international market. Interestingly, Mercosur has signed diverse trade, political, and cooperation agreements with a greater amount of nations and agencies across the various continents.

Furthermore, Mercosur comprises the fifth best economy in the world. It contains around 70% of the population of South America and it also represents 82.3% of total GDP in South America. In other words, the aggrupation unifies a population of more than 295 million people and 15 million of km^2 with a great variety of natural treasures like the Guaraní aquifer, one of the largest freshwater reserves in the world. Hence, Mercosur is organized in  such a way that enables it to become one of the most competitive and developed economic establishments and industrial areas in the Southern Hemisphere.

The other possible path for Latin America is directed by  Pacific Alliance, a regional integration initiative promoted by Chile, Colombia, Mexico and Peru.  Pacific Alliance has the purpose of strengthening the state party economies and to define joint actions for trade linkages with Asian countries in the Pacific Basin. Also, according to the Lima Declaration, the intention of this alliance is to encourage regional integration, greater economic growth, and competitiveness for Latin America.

Pacific Alliance accounts for 40% of Latin America’s GDP. Additionally, it represents more than 200 million inhabitants, and the countries all together express 55% of the Latin American exports. Interestingly, this grouping is based on a free trade agreement that unifies a greater commercial relation with the United States and other impactful countries like China.

While Mercosur opts for an organizational strategy through institutional networks, Pacific Alliance  seeks a more direct negotiation between countries. The profile of each grouping is different because  Pacific Alliance ponders more upon its political interests, and Mercosur focuses on its economic and commercial goals. Additionally, in terms of diversity of commercial relationships and the main trading partners that each group has, Mercosur has diverse commercial exchange, while Pacific Alliance concentrates more than 50% of its trade with the United States. The central difference between both processes is that  Pacific Alliance does not include the formation of a customs union.

Today, the countries of Latin America are up to the trade-off between choosing an economic integration strategy or a regional political integration and its projection upon the international community. Hence, the heads of states will have to confront both processes and evaluate these as well as the power of their interests. On the one hand, the benefits  include  having economic relations with developed countries, and on another front, the diversification of commercial partners and the empowerment of an independent economy from United States focused on regional alliances as an attempt to obtain regional leadership.