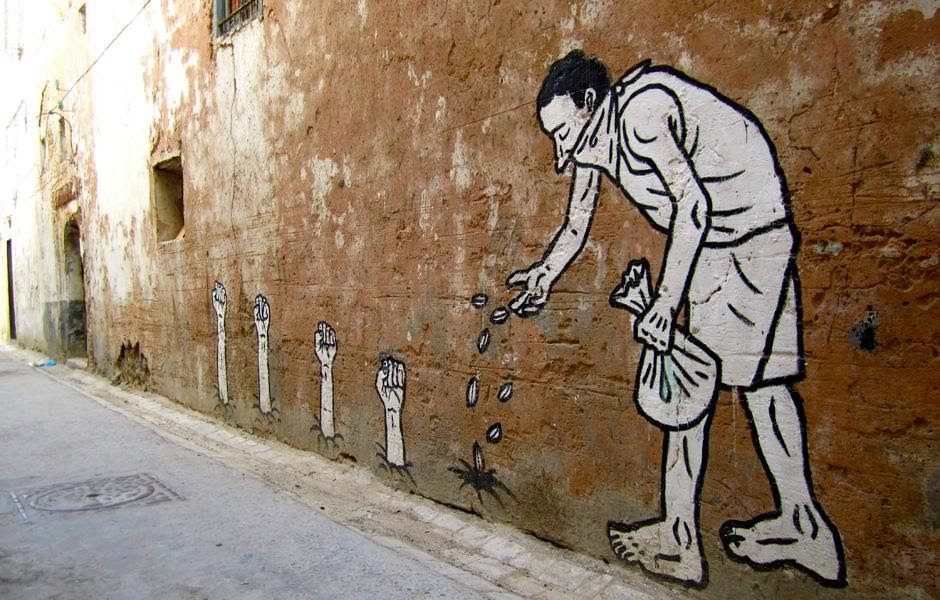 Freedom is a basic human right and a cornerstone of human development. A human being born into this world has to be free from destitution, both economic and political, in order to live a better life and pass on a better world to future generations. Removing the barriers to essential freedoms should be the central goal of social and economic policies, as argued by Nobel laureate Amartya Sen in his 1999 book Development as Freedom.

Yet expanding freedoms cannot be achieved in societies where injustice in its different forms prevails. We live in a world where economic, political and military power is extremely concentrated in the hands of self-interested minorities. Increasing the sustainable wellbeing of individuals and societies requires a correction of all these social and economic inequities.

This objective seems very far from the realities of today’s Arab world. Widespread discontent and social unrest are still sweeping across the region – a direct result of decades of failed economic and political transitions led by largely autocratic regimes that survived for a long time.

These regimes succeeded in maintaining their grip on power by moving from social modernising populism to an alliance with elite capital. Governments embraced a consumerist culture at the expense of job-creating investments, with oversized real estate projects and shopping malls owned by state-linked business elites mushrooming everywhere.

This went hand in hand with various forms of repression, especially to control the grievances of the poor who were denied social progress, and a co-opting of the middle class through the use of economic transfers and subsidies. International support for these regimes also provided a lifeline on which they thrived.

The people of the region were therefore caught in a grand authoritarian bargain, where they were forced to trade their political rights against government-driven economic security. This state of affairs led to rising income inequality, rising inequality of opportunities, moderate growth with insufficient job creation, in addition to daily indignities.

Extremist ideologies became more popular in the shadow of oppression, because of their attractive moral critique of the system, and because regimes fostered them as a counterweight to revolutionary tendencies in society.

Young Arab men and women have been the face of the uprisings at least since 2011. They are increasingly raising their voices against their parents’ generation. They are holding them responsible for their social and political exclusion, as the old seem to have erected – with the support of the state – high barriers to entry to the labour market, housing, marriage and even the political sphere.

The 2016 edition of the United Nations Development Programme’s Arab Human Development Report carefully analyses the development outcomes and systematic social exclusion of the more than 105 million youth living in Arab countries. More Arab citizens and especially young people are living in conflict, forcefully displaced, unemployed and otherwise socially and politically excluded than ever before.

Yet at the same time, the Arab region is benefitting from extremely high electronic connectivity (more than 70% of young people in the region have access to social media); high education enrolment, especially among women; and better health outcomes in countries not afflicted by conflict and violence. This contradictory state of affairs offers a window of opportunity that should be seized.

But the route towards progress does not seem to be an easy one. The authoritarian bargain carefully crafted by the ruling regimes – under broad, often sectarian and/or partisan power-sharing umbrellas – has extended its dominance to the family level through the traditional patriarchal social contract.

Guaranteed public sector jobs, nepotism, subsidies and other regime-led economic interventions have allowed families to survive on one (male) breadwinner, thus eroding the bargaining power of women and youth. The rollback of the state and the repeated financial and political crises seem to have shaken this state of affairs.

Economic development thinkers and practitioners need to present credible alternatives for a new Arab society that meets citizens’ aspirations. They should find answers on how to create an attractive and moral economic system; how to reinvent an effective and inclusive state; and how to devise rules that can aggregate preferences that respect citizens and their legitimate differences, and, most importantly, their basic freedoms.

The change vanguard and the narrow national path that lies ahead

Online teaching during a pandemic: The Lebanese perspective