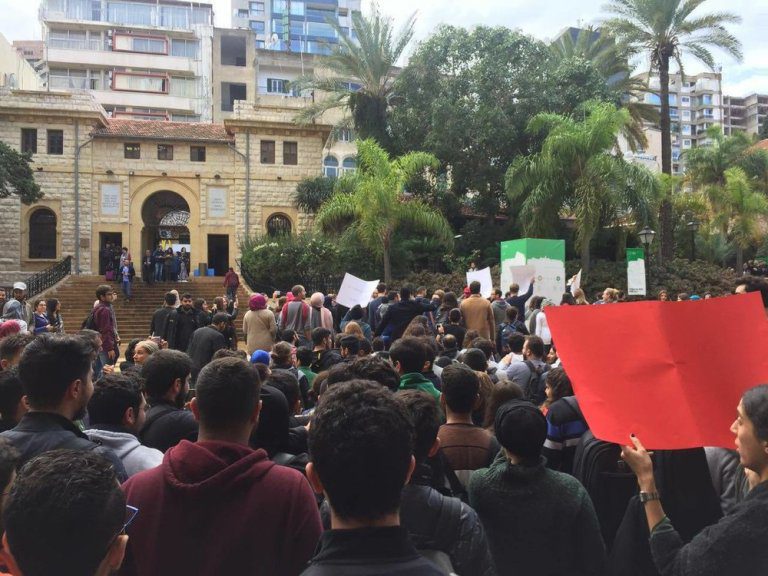 AUB students gathered on Tuesday at 11am in front of College Hall, the campus’ main administrative building, to show support for their fellow peers who received Dean’s warnings the night before. It all started in May when the administration decided to revoke graduate assistants’ monthly stipends, claiming that this cut was needed to ensure a more efficient system. This prompted aghast graduate students to launch the “Boldly G-AUB” campaign to protest unfair labor treatments and to demand the reinstatement of those stipends. 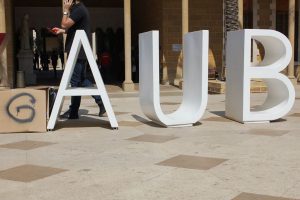 After Boldly G-AUB grained traction on campus, the administration seemed to yield to the demands of students by reinstating stipends for the fall semester. Still, on the back of this small victory, graduate students pressed on for their demands for fairer work conditions. On November 13, a tent was pitched next to College Hall as a tool to pressure the administration. Graduate students began to take shifts there, even overnight. On Monday at around 1 AM, security guards forcibly removed the tent and the Dean of Students issued Dean’s Warnings for six graduate students. Those warnings subsequently deprived the students from their scholarships and graduate assistantships that waive their tuition fees making their future at AUB uncertain. All of the university’s gates were closed, not allowing any entry into campus until the next morning, making it one of the very rare times AUB was fully shut down.

On the morning before the scheduled protest, another seven Dean’s warnings were issued, four of which were given to graduate students who also lost their graduate assistantships. The Dean of Student Affairs Talal Nizameddin stated that the involved students were informed on several occasions “that the placement of the tent was in clear violation of University policies, rules, and regulations and therefore must be removed.” “The students were given a final deadline yesterday to dismantle the illegally placed tent and to cooperate with the University but the deadline passed, and the students continued to refuse to cooperate.”

Students showed solidarity with their colleagues and gathered in front of College Hall with many of them screaming “Shame, shame, shame on you!” On the occasion of the Lebanese independence, the annual “Raising the Flag” ceremony was set to take place at 11:50am in front o 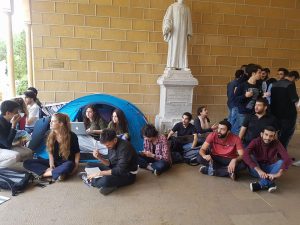 f West Hall. At that time, the protesting students decided to move their support to West Hall where Dean Nizameddin was present. “Bring back stipends,” everyone shouted.

Even though the administration clearly explained its actions, the students were really furious, and this was seen during the protest. “This is an American university! Since when do American universities terminate students’ scholarships when they fight for their rights? Has Trump’s madness reached Beirut? Shameful and disgraceful,” said Nihaya. “There was no way I could remain silent after seeing one of my friends’ future getting robbed like this,” said Nour, an undergraduate student protesting. “We think the protest left its mark on the administration,” said one of the protesters, “and we are sure the issue has not ended here.” Members of the University Student-Faculty Committee and of the Student Representative Committees have met with Dean Nizameddin during the protest in order to discuss the situation and try to reach a solution. In the meantime, the livelihoods and academic future of the punished graduate students remain uncertain.

Bashar Suleiman accused of rape, and Aya Metwalli of drugging and enabling rape