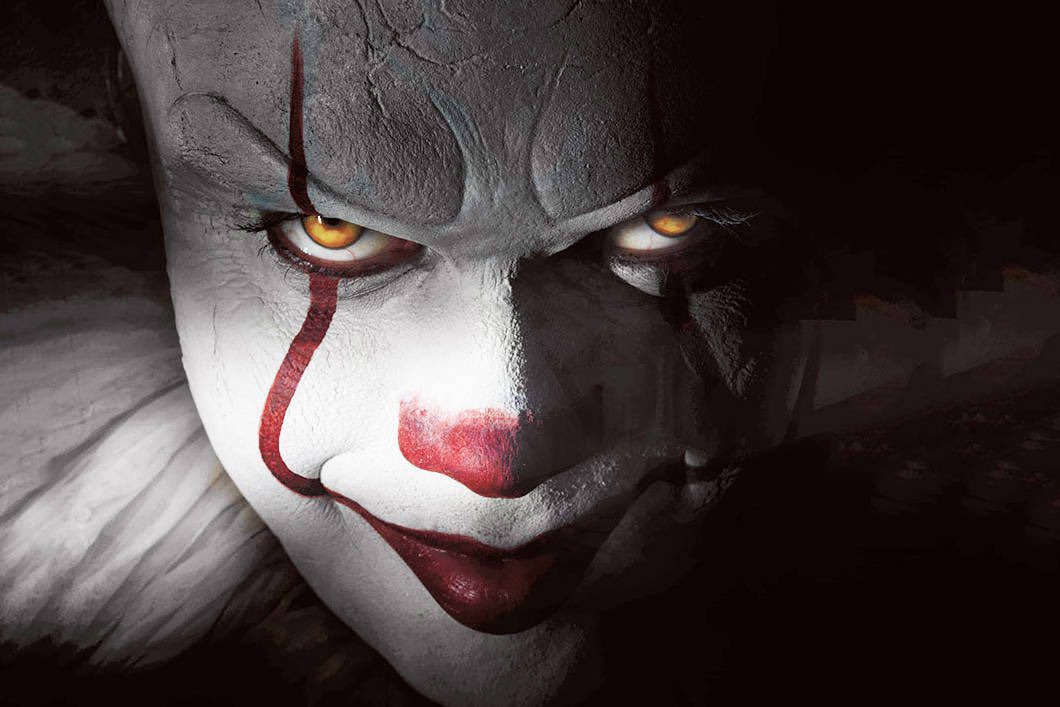 It is a movie adaptation of the bestselling 1986 horror novel written by horror maestro Stephen King.  Stephen King has the privilege of being the author with a huge number of film adaptations of his work.  From the dismal Pet Sematary, to the award-winning The Green Mile, the chilling Misery, the teen classic Carrie, the much-loved Stand By Me, and the brilliant masterpiece The Shawshank Redemption.  However, It (2017) is not the first movie adaptation of this popular novel.  The first adaptation starred Tim Curry as Pennywise in a film released in 1990.

It is a coming-of-age story about seven childhood friends who are terrorized by an ancient evil known as “It”. “It” exploits its victims by taking the form of their worst fears and phobias, and then feeds off their terror before it devours them.  “It” takes the form of a clown to appeal to young children, calling itself Pennywise the Dancing Clown.  The childhood friends are forced to unite, in order to survive a cruel world that offers them no choice other than “kill or be killed”.

It is directed by Argentinian director Andy Muschietti, who is best known for his 2013 horror hit Mama, starring Jessica Chastain.  Muschietti is a master of horror, who carefully crafts each scene to in order to harness the biggest amount of scares possible. His effective set pieces create a sense of looming dread and suspense, where you never really know which direction the danger is going to come from.  There are genuine scares here, and many jump-out-of-your-seat moments which are guaranteed to shred your last nerve.

Bill Skarsgård does a fantastic job playing the lead role of Pennywise the Dancing Clown, and is probably best known as coming from a prominent acting family. Bill’s father, Stellan Skarsgård, is best known as Professor Eric Selvig from the Marvel Cinematic Universe (MCU); while his older brother Alexander Skarsgård, is best known as the seductive vampire Eric on the HBO’s True Blood series, as well as this year’s Big Little Lies.  Bill terrifies as Pennywise, who can be either quietly sinister or maniacally terrifying depending on the scenario that he is placed in. Skarsgård’s performance as the murderous clown is both disturbing and fascinating to watch, stealing every scene that he is in with ease.

It is also a horror movie with a rigid emotional core– it contains distinctive themes that makes it stand out from other movies in the horror genre.  This engaging movie deals with growing pains, vicious bullies, sexual abuse, predatory parents, death of a sibling, and loneliness.  This movie skillfully captures the insecurities of being young, and particularly the crippling fears upon the realization that there is no one to turn to for help when your life’s in danger.  The adults in It are not to be trusted; they are indifferent, cruel, and at times just as bad as Pennywise.  These childhood friends eventually come to learn that the only people that they can rely on are their friends.

The child protagonists are charming, funny, genuine, and real. Also, they come to learn that their strength lies in protecting each other, conquering their fears, and fighting back in the face of impossible odds.  The theme of friendship and conquering your fears is at the heart of It, and what makes it stand out in comparison to other films in the horror genre.

This is easily the scariest horror movie of the year, incorporating great special effects, eerie music, hallucinatory imagery, and haunting set pieces.  At times, It reminds us of another fantastic Stephen King film adaptation, Stand By Me, where a group of friends unite in their quest to conquer death and face the cruel realities of the world.

Since It’s release in September 2017, Skarsgård’s Pennywise has become a cultural icon, joining the ranks of other horror movie psychotic killers such as The Nightmare on Elm’s Street’s Freddy Kreuger, Halloween’s Michael Myers, and Scream’s Ghostface.